Why does Pascal have numeric labels?

Pascal was intended, in part, to be a simple language to implement. Some of the design decisions reflecting this are

However, there are also some bewildering decisions (as someone who has recently implemented a parser and semantic analyzer for Pascal):

This question is about the last point: Why have numeric labels? If labels were symbolic, then you could use your existing data structures for maintaining the current environment of identifiers for labels as well.

Putting the language in its historical context makes the choice no less odd:

[Preface: It's about genuine Pascal history, thus I will answer this based on the original 1970 Pascal Manual. Since then many different implementations have been made, so it might not be true for all variations out there]

Why have numeric labels?

To start with, one has to keep in mind that Pascal is intended to do away with labels and goto. It is not to be encouraged nor should it get much support making its usage easy. Still providing both is rather about offering a last resort in complex situations, more of a hack to make it - the black sheep of Pascal :))

Using an integer is kind of an easy escape during parsing when looking at how the original 1970 Manual The Programming Language Pascal (*1) defines a Compound Statement (9.2.1), which includes the label definition: 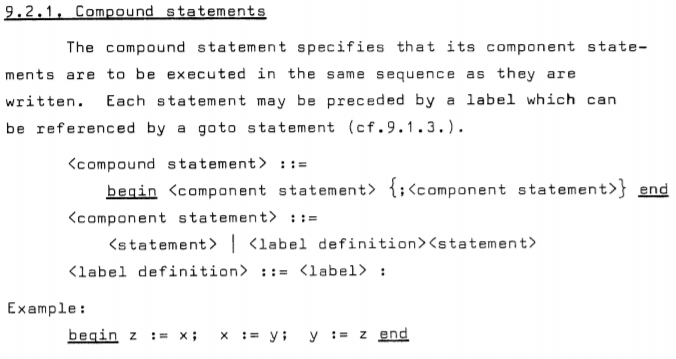 Now, when looking what a statement is:

It's easy to note (*2) that all possible variations (assignment, procedure, goto and structured) start with either an identifier or a keyword - which both always start with a non-numeric (letter) character. Thus, if the parser detects a numeric character where a compound statement should start, it can go ahead, collect up to 4 of them (Labels may only go 0..9999), look for a single colon, assign the actual location to this label, and continue with parsing a statement (but no label).

Well, that plus the issue that labels can be forward references which are not defined at the point of usage in a goto statement. Which BTW is another oddity in Pascal, as the language is in general built in a way that everything used has to be defined before usage. Unlike often assumed, the label declaration within a procedure declaration is only needed for labels that are supposed to be accessed from outside a procedure as the goto definition explains: 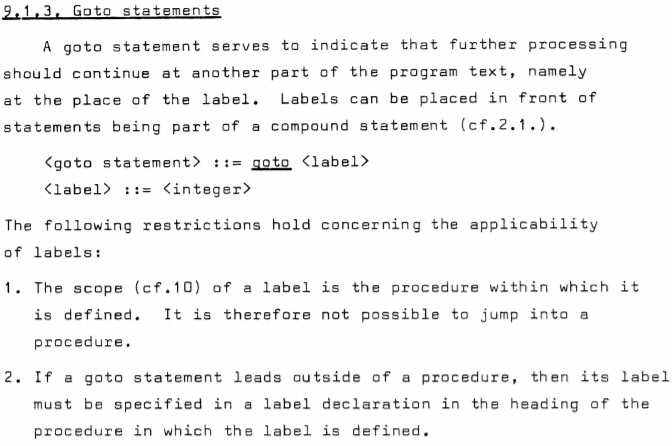 Essentially the label declaration is much like an EXTERNAL declaration in Assembler (or C). I guess, since goto already breaks the whole idea of structured programming, Wirth didn't care to provide a nice solution, but simply hacked his way to satisfy a few exceptions, which he may have hoped to go away :)

Speaking of forward (and since it has been mentioned in the question), the forward statement to allowing to define a procedure declaration without its implementation is something Pascal only acquired later, kind of an issue fix in hindsight to allow the rare case of mutual recursion. Something like:

That is, two procedures calling each other. Without a forward definition Two could call One, but not the other way around. There is no way to formulate this in a sequential source file without a way to tell the compiler something about the second procedure before defining the first. So Wirth had to add a solution.

Since we're already here, the requirement of a complete procedure definition when using forward and leaving out all the details when writing the deferred statement part serves two purposes:

These two go hand in hand. Pascal wants to know everything about a procedure when it's called (*4), so it has to be there upfront - and there is exactly zero need to write it later again. Doing so would not provide any advantage to the compiler, beside a chance to insert new issues that should not arise in the first place.

*1 - The site is BTW a treasure trove for early Pascal.

*3 - I tried to write some cool character handling here first, until I realized that it would hide the basic idea, so just the basics.

Yes, it's a recursion - we all know how much Pascal teachers love recursion - but there are non-recursive situations as well, except they will need a bit more context, so again not really cool for an easy to understand write-up.

And yes again, I know it's missing a stop condition, but who cares, you get the idea anyway, don't you?

*4 - Think parameter compliance and alike - stuff C omitted and had to 'relearn' the hard way.

Pascal can be parsed without using a table of user symbols. If general symbols were allowed as labels, a compiler that encounters a user identifier when a statement is expected would have no way of knowing in advance whether it was a statement label without having to refer to a symbol table.

This is not an answer as I don't know the real reason. It is just a comment about parsing

is expected to be followed by either = or a variable type. If a statement were added, then parsing would be a lot more complicated. If, however, you get

it is relatively unique. If it is followed by anything else other than a statement, it is a compilation error.

It should be noted that some implementors of Pascal compilers have, like you, questioned this restriction, and decided to allow alphanumeric labels as a language extension. For example:

This does not break Pascal's single-pass compilation model, due to the requirement that all labels be declared before use.

So the question, then, is why the original definition of Pascal published by Niklaus Wirth in 1970 (referenced in Raffzahn's answer) used numeric labels. The text does not give a rationale. However, there is a subtle hint in the restrictions on goto listed on page 28:

Still, this wouldn't necessarily be a deal-breaker for alphanumeric labels, as recognizing a labelled statement only requires checking that the : after the label isn't immediately followed by =, and goto statements are easily recognized by the keyword goto. Maybe this was more difficult with 1970 compiler technology, but I think there's something else inspiring this rule.

And this is just speculation, but possibilities are:

Not the answer you're looking for? Browse other questions tagged history programming design-choices pascal or ask your own question.

38
Where does this esoteric Pascal operator come from?
7
When were the analogs of the C operators "break" and "continue" introduced in Pascal?
34
Why was nil defined as a reserved word in Pascal?
37
What "unusual" syntax assembly languages are/were there?
9
Was there an input device capable of entering all Algol 60 symbols with correct appearance?
5
Looking for the source code of a sophisticated Pascal pretty-printing program
5
Which extant ALGOL-60 compilers fully support numeric labels?
3
Why were procedure parameter specifications optional in the ALGOL 60 Revised Report?
16
When did argument types first appear in formal argument lists?