Why did some video games apparently use "interlaced" video modes?

Why would any game console or individual game send an "interlaced" picture to the TV when it's right there above the console? I assume that the picture must suffer in some subtle way from this "only every other line of image data", but it must be far more noticeable for video game content compared to a movie or TV show.

Indeed, early devices such as C64, NES, or IBM PC with CGA adapter did not use interlacing, but simply sent 240p to the TV. And later devices such as the Amiga could send either 480i or 240p.

For example, Amiga 500 can send either interlaced 480i for hi-res graphics and progressive 240p for low-res graphics, and the game is free to select the mode anytime. This can be used for example show a static title screen in 480i for high resolution and the moving game action in 240p for lower resolution without flickering. The reason why switch to 240p, instead of sending 240p content as two 480i fields, is to avoid the 240-line content from flickering, as it would look like as if the same 240-line content is jumping up and down by half a line for each 60 Hz field.

Standard TV programs are interlaced 480i (or 576i) to have high screen update rate of 60 Hz (or 50 Hz) to prevent flickering and to achieve a high resolution of 480 lines for static images. But it also means that the image is really sent as two 240-line (or 288-line) fields at 60 (50) times per second, with half a line offset, so basically a full frame of both interlaced fields is sent at 30 (25) Hz.

Gaming consoles are free to send any kind of signal they want but the TV must be able to lock onto it. So gaming consoles must also use same horizontal rate and vertical field rate to send the video.

It means that the progressive signal that is comparable to 480i is not 480p, but 240p. There is no flickering as only one field of video is sent so the video lines drawn are on top of each other. The difference is that if game screen has 240 lines but sends it as interlaced 480i, there can be some flicker seen due to the same lines being drawn as interlaced, the picture seems to jump up and down by one line of 480i (half line of 240p).

To rectify some misconceptions that seem to be very common:

It's not about what a console can deliver as it is what a TV can display. Classic (pre digital) TV sets could only receive and display interlaced frames. So no sense in producing a non interlaced one.

Similar console developers would have been unwise to create consoles and content that could not be displayed on what Joe Aerage had as TV. Sales might not have been geat.

(In addition, therms like 480i or 480p are only defined in hindsight from a digital POV, and have only a restricted meaning when it comes to analogue TV)

No. Well, not directly. Of course, everything in transmission is always about bandwidth, as that's the shared resource. But it wouldn't have been a big deal to double channel width in the early days.

Doing this without any additional measure would result in a quite flickery picture, despite a frame rate equal or better than cinema.

The chain of thoughts looked a bit like this:

This is, BTW, the similar what makes pure 24 fps cinema flickery, like known from old silents. To reduce the inter frame flicker each frame later got displayed two or three times (*2) before moving to the next.

So far a nice solution. A picture with 200-300 horizontal lines is quite fine for TV and would satisfy all needs. Producing TV content at 50(60) Hz frames would have been no issue. But then there were movies. They were produced on 24 Hz, so transmitting every picture twice would work quite as good as genuine TV production, but waste about half the bandwidth.

Thanks to the wonders of human sight movies now used the 50(60) fps to display their 24 fps in higher resolution, while genuine TV content got real 50 (60) fps in kind o an enhanced resolution.

Because that's what the TV set expects as input and is able to display. A (classic, CRT) TV set does not combine two 'half' pictures into a single one to be displayed at double fps, but displays each 'half' on it's own, the second offset by a line. It's the way a CRT hardware works.

Because games need to be compatible to the TV hardware (and standards) out in the field. It's not a great idea to produce a console that is can only work with the very latest displays - at least not if one intends to sell more than a few.

I assume that the picture must suffer in some subtle way from this "only every other line of image data", but it must be far more noticeable for video game content compared to a movie or TV show.

Not really, rather the other way around, as a console game is able to adjust. Keep in mind, 480i or 480p does only tell part of the story, as that number only names a frame size and structure, not the frame rate. Interlaced will usually create 50 (60) fps, while the same as progressive can be 25 (30) or 50(60) fps.

A classic TV set expects 50(60) 'half'-frames per second, so a console can use this as

So any game that is about fast action, like a race game or a (complex) shooter will create each frame separate and get a smooth 50(60) fps with at cost of some resolution (288/240 horizonal). In contrast a game that is more about beautiful pictures, or lots of content may go ahead and do 25(30) 'full' frames using full 576 (480) horizontal lines (*3).

Oh, and of course games could go ahead and do fast content with high resolution - with the same drawback as TV content had with motion artefacts.

*1 - Yes, that is in fact related to the wandering dark bar that is visible when an unsynchronized camera films a CRT TV.

*2 - Or more exact, the douser that covers the film movement between frames also cuts one (two) more times within a frame, transposing the flicker to 48 or 72 Hz, where it gets way less noticible.

*3 - In reality this wasn't uses as often due memory limitations to generate and hold pictures that large.

To be exact: "Interlacing" is not just a method for bandwidth saving, but mainly for increasing vertical resolution.

EDIT: Bandwidth saving and increasing resolution are just the different sides of the same coin, see a comment by Justme.

Video games, as well as home computers, did not use interlacing, they generated only "odd" picture frames, not respecting neither interlacing nor shifting. Old TVs were more robust and tolerant to the video signal, so they can handle such "non-standard" signals with no big problems. So video games have got 50 pictures per second, but only 312 possible lines to display. In fact, less, because some of them are outside the viewable area.

The main reason to use interlacing in a video game could be increasing the vertical resolution up to 600 (approx.) lines. On the other side, interlacing has some drawbacks, as image flickering. You have to use more subtle video generating circuits, handling with the even/odd frame distinction, etc.

CRT TVs were designed to handle interlaced signals, where the TV alternates by receiving odd scanlines and even scanlines on alternating frames. The so-called progressive mode was invented when some hardware designer noticed you could start the even and odd frames on the same scanline, so the CRT's electron gun overwrites the previous frame's lines instead of drawing between them. This doubles the frame rate and halves the vertical resolution, both of which were useful for game machines (since there usually wasn't storage space for high-res graphics). This is also why old game consoles exhibit the scanline effect, where there are little gaps between rows of pixels. 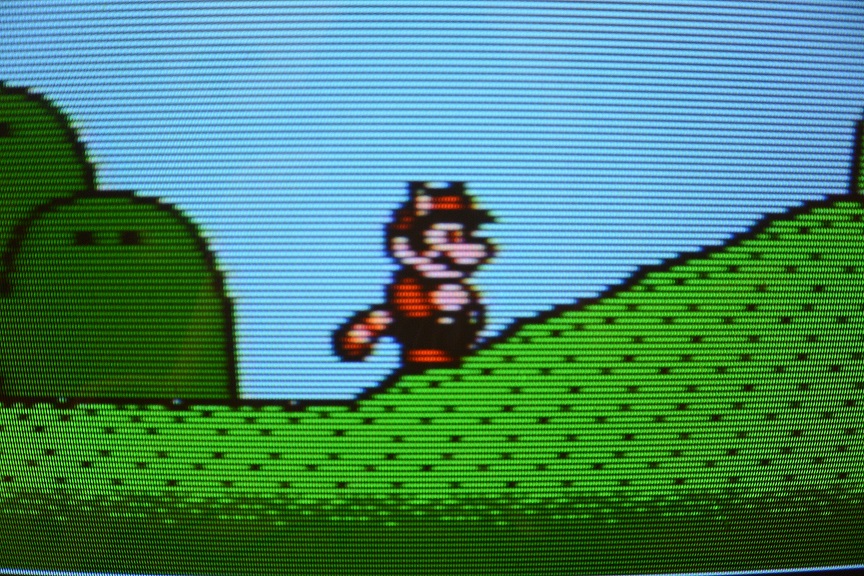 Interlaced signals don't have this problem because those gaps get filled on the subsequent frame, at the expense of making the image more jittery (an effect known as interline twitter), which is usually smoothed out by applying a blur, but video games didn't generate such blur. So that's another reason games used progressive scan.

Justme’s answer (and commentary with supercat) explains this the best. I’ll just add a couple of notes:

6
Is my understanding right about the actual differences between 240p and 480i?
12
How does Atari 2600 TIA display multiple resolutions in Asteroids?

18
Did the Macintosh Classic series use DMA to display video?
16
Z80 and video chip contending for random access
8
A different kind of sprite system
12
Did any machines alternate between two video memory banks?
39
Why did computer video outputs go from digital to analog, then back to digital?
38
Why did early arcade games use vertical displays?
5
How much memory did the PlayStation development kit have?
18
Who considered multimedia capability a liability for a business computers, and why?