What kind of EPROM was used for the Apple //e character generator, and how do I write a new one?

I have an old Apple //e clone, bought in Brazil (but assembled who-knows-where-on-Earth) that has not been touched for over 15 years.

At least, from what I could see, it is a //e -- but not enhanced, since it has lowercase characters, but came with 48k RAM (is that correct?). When booting, instead of "APPLE ][", "APPLE //e" or any clone brand name, it prints "COMPUTER" on the screen (now that is an informative message!)

When it was working, I remember the character generator had some problem (some characters displayed kind of weird on screen, with some pixels missing sometimes, but not always). So I was wondering if I can dump its content, maybe debug and fix it, and put a new EPROM in its place. But I don't know what kind of EPROM it is -- there is no useful information on it, and all I can see is that it's a 24-pin chip, with the round hole in the middle for recording.

What IC could I use to replace that one? And what kind of gear do I need to dump the old one's contents and write the new one? Would a MiniPRO TL866CS, for example, do the job? (it's easier for me to get a MiniPRO than any other EPROM recorder)

Your clone might be the same or it might be different - the best way is to try to decode the pinout using either a logic probe (while on) or even a multimeter (while off) to trace the voltages and signals.

In any case the larger question of how to read and write EPROMs is better covered in discussion forums or blog posts such as this fairly comprehensive one.

Unless it's been improved recently the MiniPRO TL866CS might need a work-around to use 25V instead of 21V to program a 2732 (see the circuit below), or at least a tolerant 2732 that accepts 21V. Here's another site that discusses various aspects of programming old EPROMs with the TL866. 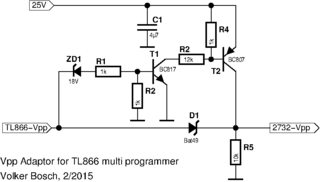 Since you ask about the "Apple //e character generator", perhaps I should point out that unlike earlier Apple II video ROMs, the //e Video ROM actually contains all the possible bit patterns that are output by the video hardware, including LORES and HIRES patterns. Your clone might not be the same.

The TEXT patterns are stored in the first half of a 4k ROM ($000-7FF) and in the first and third quarters of an 8k ROM. The patterns are in reverse bit order and inverted. For more technical details see page 8-40 in James Sather's Understanding the Apple IIe.

Not the answer you're looking for? Browse other questions tagged apple-ii rom chip or ask your own question.

12
What format is used for Apple II cassette tapes?
18
How many versions of DOS were there for the Apple II and what were the differences?
22
What makes slot 7 of the Apple ][ unique from 1-6 and how was this used?
13
Anyone remember how to write the Apple ][ HIRES pages to disk to make screenshots?
9
Was there an Apple IIc clone other than the one from V-Tech?
46
How was it back then in 1984, when the Apple II had color, and the new Macintosh didn't?
5
Does the Apple IIgs FPI assert /CROMSEL for *write* accesses to the extended ROM space?
12
On what Apple II and II+ keyboards can the ']' character be generated?
4
How was the second bank of Apple IIc ROM accessed?