Is there a screen recording application for Windows 3.1?

I am looking for an application that runs in Windows 3.1 and will save the screen to a video file on a disk.

I know Windows 3.1 had a extension called Win32s, which is a subset of the Win32 API and will run some NT 3.x and 9x applications; an application that works under Win32s is fine.

If there is nothing, then I will use an emulator like DOSBox or a VGA capture card.

There was Lotus ScreenCam, which was initially released for Windows 3. It used its own SCM format, which only recorded events and optional audio. Later versions (I’m not sure which, or whether this was ever available in a Windows 3- or Win32s-compatible version) could convert SCM videos to Flash. Here’s a screenshot of ScreenCam 2, which is included in Lotus SmartSuite 4.0: 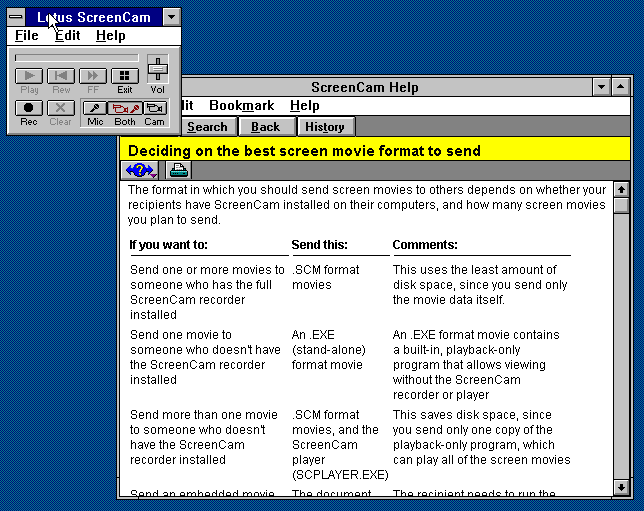 This review of ScreenCam 2.0 gives a good overview of its capabilities.

As others have mentioned, Windows 3-era computers weren’t powerful enough to record full-screen videos in real time — they lacked the CPU power to compress in real time, and the disk capacity to store uncompressed video.

Your suggestion to use DOSBox is probably the simplest option nowadays!

(ScreenCam is still available for current versions of Windows, published by SmartGuyz.)

Not the answer you're looking for? Browse other questions tagged windows-3.x software-recommendation screen or ask your own question.

89
How did Windows 3.1 implement multitasking?
21
Is there a better way to the 6 disks install of Windows 3.1
8
Where can I get icons for Windows 3.1/95-style GUIs?
6
Where is the literature for Windows 3.1 Batch mode setup?
8
Strange "snow" artifacts when dragging a window in 256-color mode
9
Is there a generic VBE driver available for Windows 3.x?
7
SSH for DOS / Win 3.1
6
Dump process memory of Windows 3.1 control panel applet
13
How can I extract the contents of a Windows 3.1 (16-bit) game EXE file?
16
Windows 3.1 Hardware acceleration API