How are Amiga libraries structured?

In this Crash course to Amiga assembly programming, the author loads A6 with a constant, and then regularly jumps to offsets from that constant. He explains: All functions within that library can be accessed by jumping to addresses relative to the base address of the library. So in the example codes on his page first load a CPU register with the base address of exec.library:

and then we find that jumps to subroutines inside a library go like this:

I am used to ELF libraries on Linux. I was expecting to find some way to look up a routine's entry point by the name of the routine, (for example, that's how dlsym etc works. I've never done assembler on Linux though).

Is exec.library always at $4? Are libraries generally loaded at some fixed address, or it this only because exec.library is in a kickstart ROM?

Are the symbol names stored in the libraries anywhere, so that I can look the addresses up?

If I have a different kickstart version, could the entry points in exec.library be different?

It is unusual to refer to the function addresses by number. The Amiga standard header files will define symbolic names. My memory is a bit hazy, but I think the code you quoted would more commonly be written as:

Yes, a pointer to exec.library is always at $4, and this is (in theory, but not in practice) the only fixed address you should ever use in AmigaOS. To obtain the base address for any other library, you have to ask exec.library. It has a function OpenLibrary which takes a library name and a minimum version and will return to you the base address of the requested library.

If you follow the pattern of getting the pointer to exec.library from $4 and then calling OpenLibrary for every other library, then you will be compatible with different Kickstart versions. Well-written libraries will be backward-compatible, that is, the old functions will continue to be work as is on newer Kickstarts. This is why OpenLibrary takes a library version number: you must ask for the smallest version number that contains all the functions you need. If the library is not present with the requested version number or newer, OpenLibrary will return NULL (which is a condition you should test for!)

The libraries themselves don't contain the symbol names of the functions - they are fully linked and resolved so there's no symbol table. So you will need the header files to use the symbolic names, at least when you are programming in assembly. When programming in C, you would normally link with a stub linker library that defines functions with the same names, and performs the library call on your behalf.

It is mandatory to put the library base pointer into A6 (necessary so that the library can find its own data; there are very few exceptions to this rule) but once you have completed the library call, you can clear A6 and use it for other purposes. You can have multiple libraries open at once; typically you would store their pointer in a variable, and load the variable into A6 just before making a library call.

http://amigadev.elowar.com/ contains lots of information about developing for AmigaOS, including descriptions of all the standard libraries.

@RichardDowner has already answered it, but who don't want pictures? 🤖 These are from the Amiga ROM Kernel Reference Manual: Libraries, 3rd edition, @1992 by Commodore Electronics, Ltd. 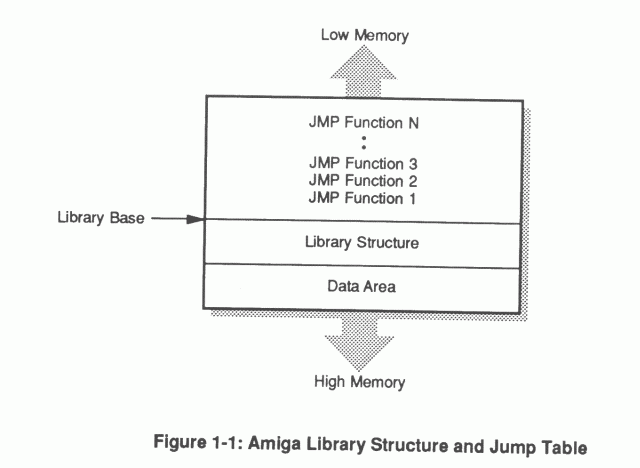 What Every Amiga Programmer Should Know: The functions in the Amiga OS are accessed through shared run-time libraries. Libraries must be opened before their functions may be used. The systems master library, Exec, is always open. The exec function OpenLibrary() is used to open all other libraries. 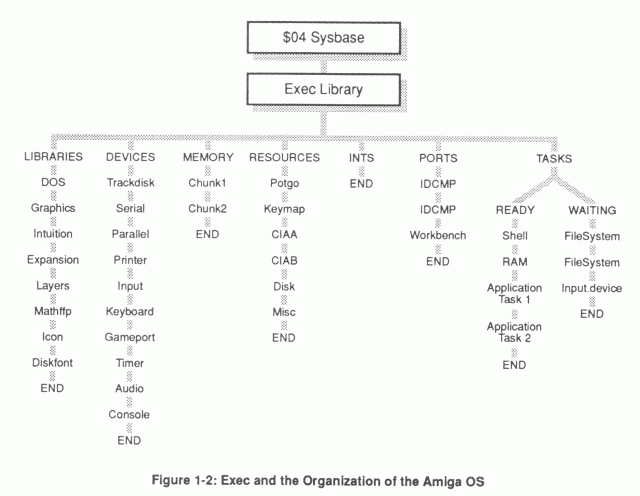 What Every Amiga Programmer Should Know: The Amiga has a dynamic memory map. There are no fixed locations for operating system variables and routines. Do not call ROM routines or access system data structures directly. Instead use the indirect access methods provided by the system.

With the one absolute entry point at Sysbase, no, it won't be. Everything else is relative and should be accessed via library calls.

Not the answer you're looking for? Browse other questions tagged amiga amiga-kickstart or ask your own question.

21
Why do Amiga Libraries have negative entry points?
6
Efficient way to JMP or JSR to an address stored somewhere else?
13
What are all the fixed addresses of AmigaOS?

11
What advantages are there to replacing Kickstart 3.0 with Kickstart 3.1?
12
How did the Amiga 1000 WCS (write controlled store) for Kickstart work?
13
What exactly are the differences between Kickstart 1.2 and 1.3?
17
How does the Kickstart ROM load and start workbench?
14
What options were available for having an Amiga 1000 not be dependent on a KickStart disk?
14
What is the minimum set of Kickstart kernel modules to allow an Amiga to boot?
12
How are Amiga Kickstart Relocation Files (.RTB) created?
11
How Amiga A590 autoboot ROM and bootable floppy disk works?
21
Why do Amiga Libraries have negative entry points?