Why do some Atari ST motherboards include many Inductors?

There are versions of the Atari 520ST, and perhaps the 1040ST, that differ in having many discrete inductors attached at the I/O port lines for serial, parallel and floppy ports.

The first image below shows a motherboard without inductors on J3 (floppy), J4 (serial), and J5 (parallel) ports. The second image is also a 520ST motherboard of a different revision that has the discrete inductors for J3, J4, and J5.

Are the inductors unnecessary, and were removed to save cost? Or was this a correction that added the inductors to solve some complicated line noise/standing wave or similar "complicated EE problem"? 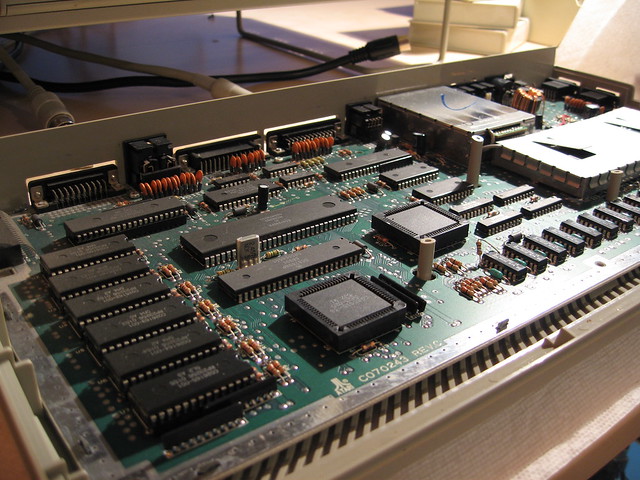 There are versions of the Atari 520ST, and perhaps the 1040ST, that differ in having many discrete inductors attached at the I/O port lines for serial, parallel and floppy ports.

Essentially all later ST have them. The first picture shows a C070115 Rev. 2 ST board wich is about the oldest in general availability. The second is a C070243 Rev. C which is the direct follow up (*1). This and all later 520 models had them added.

Are the inductors unnecessary, and were removed to save cost?

It's rather the other way around, as they were inserted later.

Are was this a correction that added the inductors to solve some complicated line noise/standing wave or similar "complicated EE problem"?

The chokes are to reduce EMC insertion as well as emission. Atari seemed to be very afraid about noise insertion at that time and it may be past of lesson learned from early units. Just open any Floppy and you'll note as well a way larger number of chokes than one would expect. Not to mention additional ferites.

A friend of mine jokingly called them Angst-Drosseln (*2) as he assumed them to be more meant to throttle the designers Angst about EMC than real EMC.

*1 - There were inbetween designs, but I'm not sure if any o them went into production

*2 - Drossel is the German EE term for choke/throttle but also meaning strangling (as in Erdrosseln). In a play with German Grammer the second meaning might be translated as "dampening the fear" :))

They are not really inductors. They are EMI noise filters for suppressing electromagnetic interference that conduct out of the unit via the wires. These kind of EMI filters usually have two ferrite beads and a capacitor in a T configuration, to filter both incoming and outgoing interference.

They would most likely not be there unless they are needed. They might be needed for example to pass official electromagnetic interference tests so that the product can be sold.

Not the answer you're looking for? Browse other questions tagged atari atari-st ports or ask your own question.

9
Remote Debugging on the Atari ST
7
What changes made some Atari ST software incompatible with the Atari TT?
6
Where to find a ROM dump for the Atari ST cartridge 'ACTION'
11
Looking for ATARI-ST Graphics Image
2
What capacitors to use in Atari 1040STE power supply
7
How to backup/dump Atari 520st floppy disks on modern hardware
25
Why did SCSI require so many pins?
7
Does the Atari 1040 STE work with the Atari SM124 monitor?
15
Why did Atari floppies run at 288 RPM?