Why does Windows 1.01 crash at the splash screen?

When Windows 1.01 is started under DOSBox, FreeDOS or one of the later versions of MS-DOS, garbage characters are printed on the screen right after displaying the Microsoft logo. Here’s an example in MS-DOS 5.0: 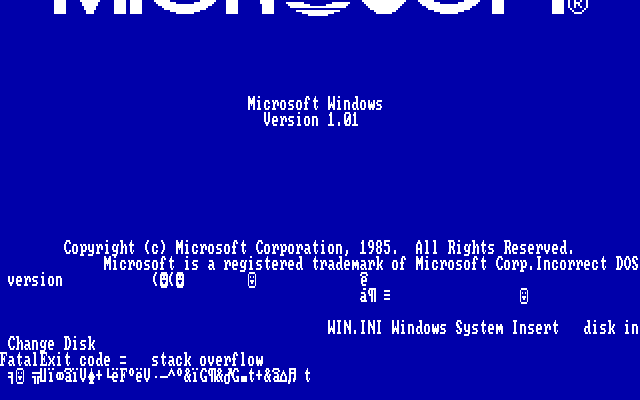 How serious is this crash? Is there a way to prevent it?

This is a botched version check error message.

Windows 1.x was designed to run under MS-DOS 2.0, 3.0 and 3.10; to ensure it only runs under one of these, it performs a version test on its host DOS. Windows does not merely obtain the officially-advertised version number; to ensure the version number is not spoofed, it also tests whether certain fields of the DOS data segment are found at the expected addresses. When one of these checks fails, the beta version of Windows displays a message detailing the specific check that failed to pass: 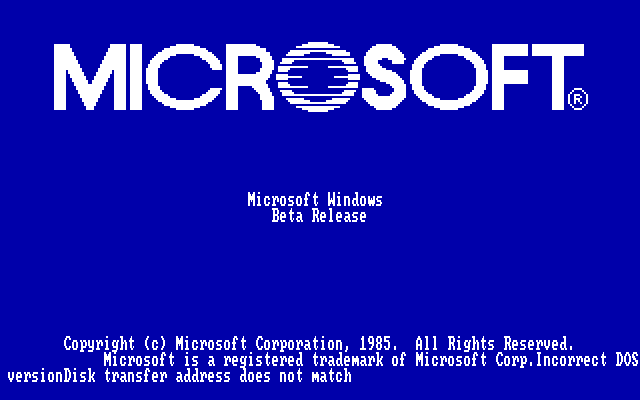 In the final release of Windows, these detailed messages were hastily removed. The code that would print them, however, was not, and this is what produces the garbage output. We can see this in the disassembly of WIN100.BIN:

At address 6E96 is a simple wrapper around DOS’s ‘print string’ system call. When the version number check fails, control flow jumps straight to the fragment which displays the ‘Incorrect DOS version’ message, and then whatever happens to be in the code segment at the offset held in AX. (In this case, AX happens to hold the DOS version number, so you could in principle guess what DOS version Windows crashed on based on what is displayed on the screen.) In the beta release, between those two there is an additional MOV AX instruction that sets the other string to ‘DOS 2.0 or greater required’.

The remedy is clear now: you need to downgrade your DOS to a version supported by Windows 1.x. Although it just so happens that later versions of MS-DOS are sufficiently similar to 3.10 to allow the other version checks to pass, which means that spoofing the version number should work fine as well.0 For that purpose you can use the command ver set 3 10 (in DOSBox), callver 3.10 (FreeDOS) or setver win100.bin 3.10 (MS-DOS, rebooting afterwards).

As to why the version check was there in the first place, I cannot say for sure. While later shenanigans with the infamous AARD code buried inside Windows 3.1 (and a similar, somewhat more obscure check found in other products) might suggest this might have been an anti-competitive measure, personally I find this rather doubtful. Windows 1 was released in 1985, whereas Microsoft’s anti-competitive efforts only began a few years later, after the release of the newly-rebranded DR DOS in 1988. Where the error message in Windows 1 beta helpfully pinpointed the exact version test that failed, the AARD code message was deliberately vague and cryptic, meant to provoke uncertainty; the code itself was also obfuscated. Given that, I presume Windows 1 verified the DOS version not to sabotage DR DOS (which did not even exist under that name back then), but because it relied in some places on implementation details that weren’t part of the official API surface, presumably for performance reasons. (Which still makes it rather sketchy: we are simply lucky that those details were preserved intact until the very end of the MS-DOS line.)

Anyway, it would have been pretty ironic if the Windows 1.01 version check were put in place to harm competition, as Windows 1 actually runs fine under DR DOS 6 (whose ‘get version’ syscall reports it as PC DOS 3.31), while under the roughly contemporaneous MS-DOS 6 (which does not spoof the version number) it crashes like described above.

0 Or perhaps not. This survey of DOS compatibility modes in early versions of Windows notes that ‘It took me several days to manage to get it to run correctly at all, and I eventually found out that you have to run it on DOS 3.3 or it'll just break in a bunch of weird ways.’. The specific ways in which it broke were not explained, however.

In order to harm competition, according to Nostalgia Nerd's Windows’ Hidden Self Destruct Code YouTube video.

What the guy is supposed to do is feel uncomfortable, and when he has bugs, suspect the problem is DR-DOS and then go out to buy MS-DOS, or decide not to take the risk for the other machines he has to buy in the office

Not the answer you're looking for? Browse other questions tagged ms-dos windows bugs or ask your own question.

17
What is the best way to obtain old versions of MS-DOS and Windows?
74
What made Windows Me so crash-prone?
33
Why did Windows 95 crash the whole system but newer Windows only crashed programs?
18
How does Windows 9x determine which disk drivers correspond to which BIOS disks/DOS drive letters?
23
Why did the original design of COM on Windows rely on the Registry?
16
Why can MS-DOS not read partitions starting at logical sector 0?
11
Why did fonts in Windows 1.01's Write application look so poor?
69
Why does the infamous "ENGAGERIDLEYMOTHERFUCKER" Metroid password break NES emulators?