How to remove ___EXPORTEDSTUB statement from a NE (Win16) program's MAP?

I started a project to get a better understanding on how to compile a game for Windows 3.x. I tried to set up the build workflow so that it produce the byte-exact clone of a great open sourced Win16 game named Hyperoid. It took some time to get a working build for Windows 3.0 which I finally managed. However, no matter how I played with the compiler and linker options, I was not able to produce a similar EXE in some aspects.

One of them is related to the export of ___EXPORTEDSTUB which is obviously not in the original release but I was unable to get rid off which in my build.

What is that and how to set up the build process to avoid it getting exported?

(More details in the project link above.)

The stub statement is used to identify an application that is run when an attempt is made to run a Windows application under DOS. The default file normally used is WINSTUB.EXE, which prints a simple error and returns to the DOS prompt. In fact, the entry point of this application is responsible for the ___EXPORTEDSTUB statement that's visible when exehdr is run on a module or when you view a module's map file. The statement isn't required for libraries, and it saves a few bytes when removed.

This is all nice but the book does not tell how to remove it. Removing the STUB declaration entirely from the DEF file or setting its value to NONE removes the WINSTUB data which is certainly there in the original game file and working as intended: it prints This program requires Microsoft Windows message when the EXE is run from DOS.

I suspect I was not clear enough about the problem so here is a screenshot of the binary differences (this is prior the Edit 2): 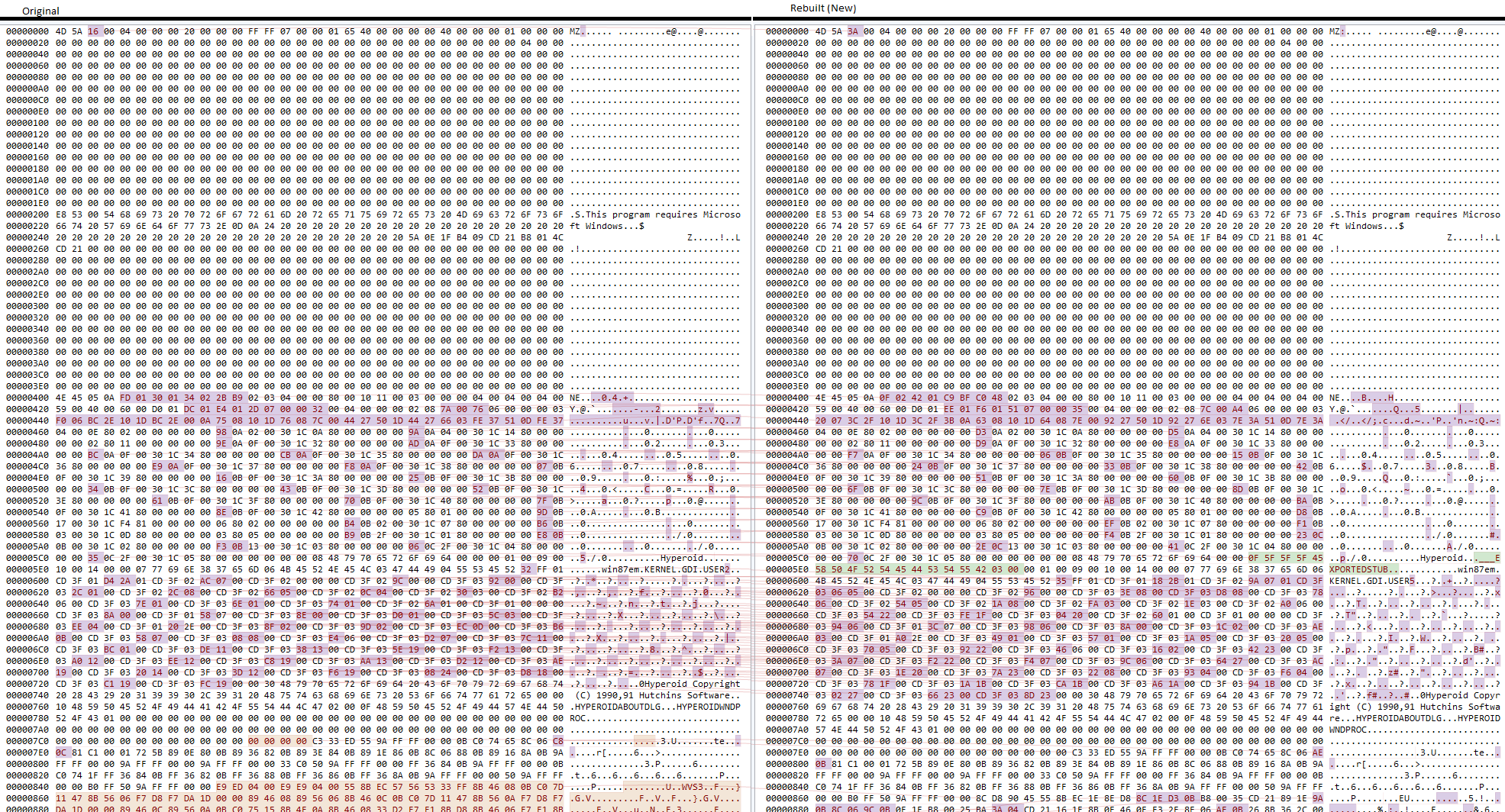 The problem is with the new file from 0x5DB highlighted with green. The other differences are due to different address values and are minor problem compared to this one. The increased NE header puts all other stuff ahead, thus removing it manually would corrupt the EXE file. Note that the DEF file tweak done in Edit 2 only moved the problematic green part a little lower.

There must be a way to tell the linker (or a reliable tool which removed it).

This is from the Digital Mars Compiler & Tools Guide:

Problem: _ExportedStub missing. The Microsoft C++ libraries provides the entry point _ExportStub, which can be exported by user .DEF files. Remove _ExportStub from your .DEF files; it is specific to Microsoft's implementation of its internal routine _GetGROUP. This change is unlikely to introduce any problems.

I was not able to find a DEF file with _ExportStub in it yet.

Windows EXE programs do have to start with a STUB to avoid unintended consequences (crash etc.) when started in a non-Windows environment.

EXPORTEDSTUB is supplied by the MLIBCEW Lib used in your link statement.

IIRC it is possible to tell the linker (-stub?) to use a user supplied stub - which was, at one time, the standard way by using WINSTART.ASM (Faint Memory).

[I wouldn't be surprised if Stephen Kitt has the right documentation ready at hand :)]

As I understand, there is no access to the original source, so it might have been build a diferent way. What compiler/linker package is used?

28
How to get started writing C for the IBM PC in 1980-81
21
Was it feasible to create Win16 software using pre-existing DOS development tools?
66
How was C ported to architectures that had no hardware stack?
20
When if ever was the C language 'int' size altered from the host machine word (register) size into a literal 32 bit size?
37
Why is this gcd implementation from the 80s so complicated?
20
How can I set up the Microsoft C compiler to make it prefer immediate-mode push instructions?
21
Why were nested functions excluded from B and C?
10
How to write Win16 program with only a single segment (combined code+data)?