Digital to analog in an old 35mm film recorder [closed]

Ask Question
Asked 4 months ago
Active 4 months ago
Viewed 349 times
5
Closed. This question is off-topic. It is not currently accepting answers.

I'm looking at an old film recorder from 1985, the Polaroid Freeze Frame, the back of the machine pictured here: 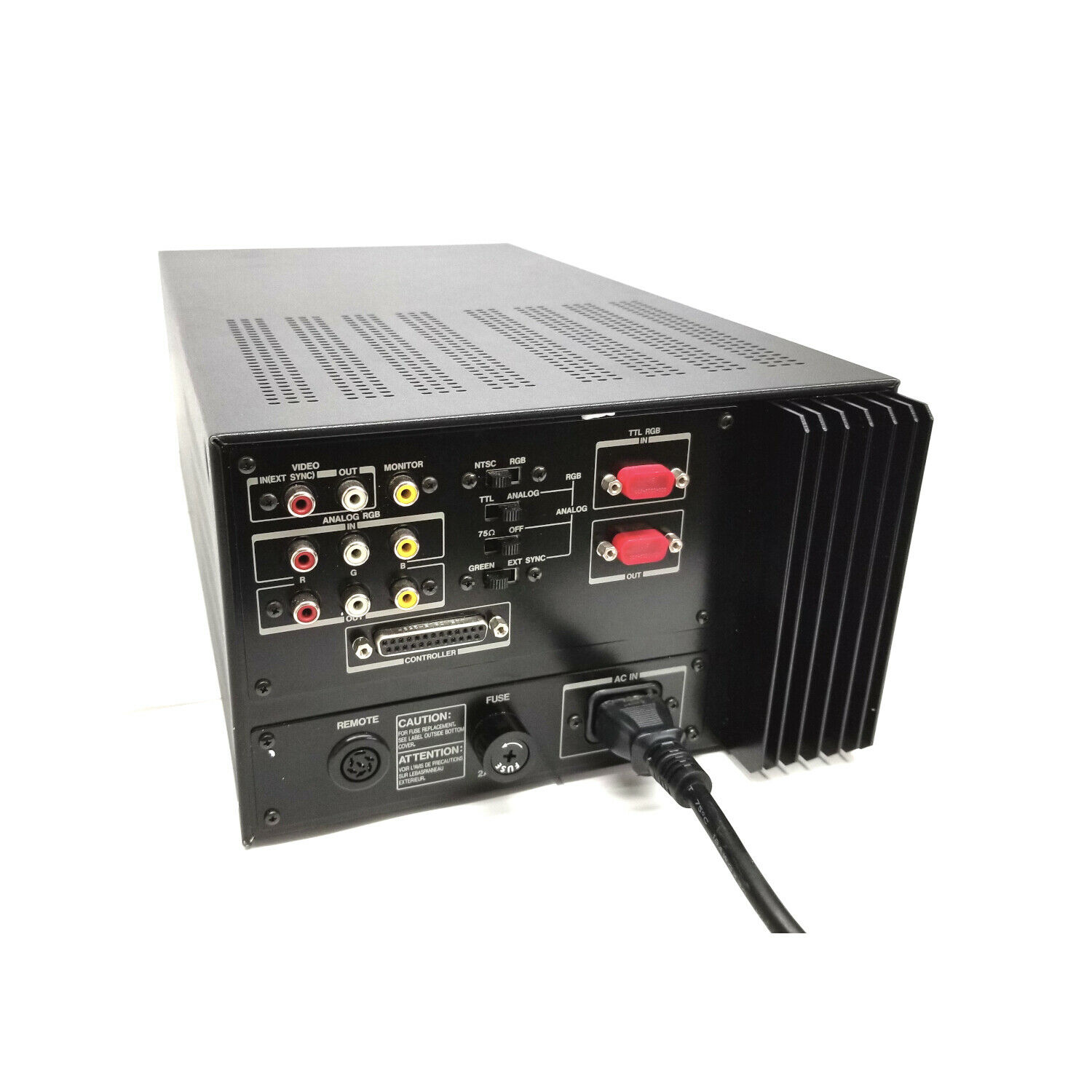 Can a digital signal can be fed into this machine, increasing the resolution?

I know there are converters for everything these days. HDMI to RGB maybe?

Can someone explain the connections available on the back in detail to me, from the time (1985) and if this is possible?

This is the CRT in the machine: http://oddmix.com/tubes/e2787pdw.html

Got this info from the Freeze Frame teardown video on youtube.

I've never used one of these devices, but I can see from the photo that the device has the typical inputs you'd find on studio equipment at the time, and for many years after.

It appears to accept NTSC composite video, TTL RGB, and Analog RGB with a composite sync, or RGBS (using EXT. SYNC input). NTSC composite input would work with consumer VCR's and camcorders, and also found as an output from computers and consoles of the time. TTL RGB is for "CGA" inputs from PCs and other computers with that type of output. The RGBS (Analog RGB) signal would work with high-end "pro-sumer" equipment or slightly later computers and consoles that had that kind of output.

All of these inputs and the internal CRT suggest compatibility with a 15.7kHz horizontal scan. That means it is capable of displaying/recording 240p and 480i resolutions. Indeed, that is what most video devices of that time generated. Note that this does not specify the horizontal resolution. That would be highly variable and determined by the input device. For example, an Apple ][ would give you as low as 140 pixels horizontal in 240p, while an Amiga (ECS chipset) could do 1280 pixels horizontal in 480i.

I doubt the device can handle 480p video signals because I'd expect it to include a suitable/commononplace input if it did. That would be a VGA input, and the device is a few years too early for VGA.

As far as using it with a high-resolution, modern, digital signal, you would need to downscale the input to 15.7kHz. For example, you might use a common studio device like the Sony DSC-1024HD to convert 1280x1024 or 1024x768 down to RGBS. Combined with a simple, modern HDMI-to-VGA converter to supply the hi-res analog to the Sony DSC, you could hope to record a modern HDMI signal.

There is no resolution defined by dedicated pixels as picture generation (the tube) as well as picture storage (the film) is analogue. Any description in terms of modern digital imaging will miss the capabilities.

Quantisation in vertical is done by lines, which are distinct, but variable in size and distance. Considering that its made for TV signals a vertical resolution between 500 and 600 such lines can be assumed.

In Horizontal there are literally NO pixels at all. Changes in grey level, as well in colour can happen at any level and incline - the later being defined by signal bandwidth.

If you must, you may imagined a line consisting of a Bazillion pixels. A black to white change over a line can reach all values possible by quantum mechanics :) The caveat is that a hard change from black to white does take a certain time - defined by the signal bandwidth, something measured in the analogue world by 'lines', the maximum number of alternating black and white lines that can still be seen as full white and full black. A TV does anywhere between 150 and 300(*1), studio equipment can do up to ~500 lines (remember, that's vertical).

Now, being TV, this bandwidth is different for colour (*2). Bandwidth on colour is usually less than 1/3rd that of B&W, so less then 100 'hard' colour changes over a scanline (*3). This is another point where TV is made to fit human perception, as colour is just a bonus information in rough resolution overlayed to more detailed B&W basic data.

So that's what signal path and media can do. What of that can be reached with this device may be kinda blow.

*1 - If one must compare, double the number is what a digital picture format has to cover (as minimum) to create a picture of the same quality by putting up alternating black and white pixel.

Not the answer you're looking for? Browse other questions tagged video crt-monitor ntsc or ask your own question.

33
How did the Amiga DCTV work
18
Adjusting focus for old CRT monitors
6
Is it possible to have a NTSC picture 240 pixels tall, without any line being hiding by overscan?
38
Why did computer video outputs go from digital to analog, then back to digital?
10
Physical resolution and control of old VGA (color) CRT monitors
3
CRT Mitsubishi Diamond Pro 1000 black screen: flashes BIOS logo during boot, but otherwise black
7
Monitor can't display boot/DOS video mode making dual boot impossible