What is the source of the Apple logo?

What is the source of the Apple logo? I heard that it was a reference to Alan Turing, who died of cyanide poisoning after eating an apple.

This seemingly well-researched article from a design magazine says

According to Janoff [designer of the logo], the reason for choosing this bitten apple logo is to prevent people from confusing the shape of the apple with some other fruit like cherry or tomato, having a similar form.

It also mentions the byte/bite pun, but says that was just a coincidence.

I've never heard the idea that the logo might be related to the apple found by Turing's bed. It seems extremely unlikely, both because it would be in incredibly poor taste and because (as mentioned in comments) Turing wasn't nearly the celebrity in the 1970s that he is now. The wartime codebreaking at Bletchley Park was only declassified in the mid 70s, and the biography Alan Turing: The Enigma wasn't published until 1983, years after the Apple logo was designed.

Incidentally, there's little evidence that he died from eating a poisoned apple. He died of cyanide poisoning, and a partially eaten apple was found by his bed. The apple was never tested for poison, and he could easily have been exposed in some other way (ref). I'm not sure anyone would even have known about the poisoned apple story before 1983, regardless.

According to official sources, the name Apple came first. In an interview with Steve Jobs and Steve Wozniak, recorded to an internal Apple video, it is explained that the name just… appeared. The recording is kept in an archive at Stanford; while the video itself is not available publicly, Terence Chea of the Associated Press transcribes it as follows:

WOZNIAK: I remember driving down Highway 85. We’re on the freeway, and Steve mentions, ‘I've got a name: Apple Computer.’ We kept thinking of other alternatives to that name, and we couldn't think of anything better.

JOBS: And also remember that I worked at Atari, and it got us ahead of Atari in the phonebook.

Many sources take this as indication that appearing before Atari was the primary motivation for the name, but this is only weakly implied above.

So the initial impulse to associate apples with computing wasn’t through Turing. And while this connection may have appeared later, this is also pretty doubtful, as @benrg’s answer explains.

That apple by his deathbed has become the most famous in science since Isaac Newton’s windfall, with claims that Turing poisoned it so he could mimic the one in his favourite fairy-tale, Disney’s Snow White, and – repeatedly – that it inspired Apple’s famous once-bitten logo.

Although writer/actor/presenter/technophile Stephen Fry says that when he asked Apple founder Steve Jobs if the story is true, Jobs replied: "God we wish it were. It's just a coincidence."

Here you can see the clip in its context:

It probably has something to do with the fact that Jobs was at one point on a diet of almost nothing but apples. He was spending his college time looking in on all sorts of courses from philosophy to calligraphy. It was also the time of "dropping out" of mainstream society and questioning everything about diet, drugs, people living in groups, relationships, etc. The health food shops we take for granted today, many of these started as commune co-ops back then.

Jobs eventually had to give up on the apples diet as he was showing signs of ill-health from it. But I guess he retained a fondness for the apple and its form may have occupied a prominent place in his mind.

Based on the cover of the Apple 1 Operation Manual, I'm going to go with "Isaac Newton." 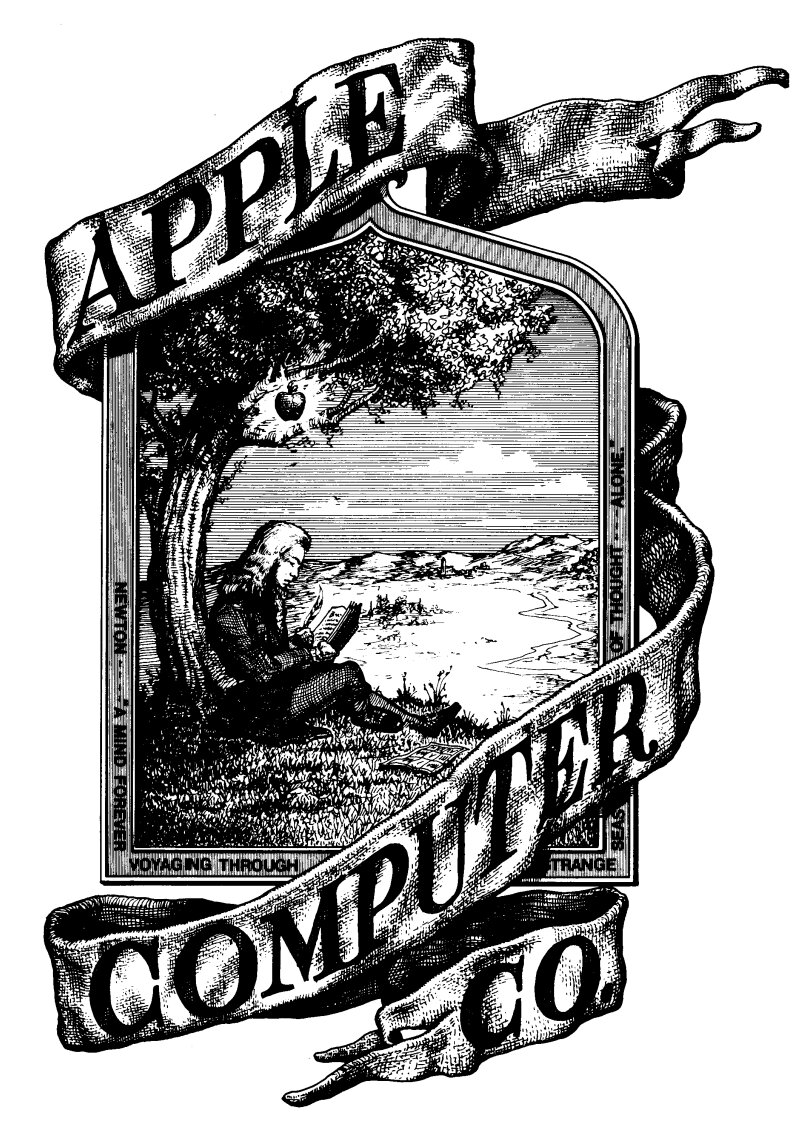 12
Apple II GS versus Mac Plus cost
36
How did Apple fail to tap the business and scientific markets?
9
What exactly did Sony contribute to the original Apple PowerBook?
14
Did Apple bundle a specific monitor with the Apple II+ for schools?
72
Why did IBM make the PC BIOS source code public?
18
What was the first operating system that supported preemptive multitasking?
6
What were the modifications on the Apple 1 board that would have made it 6800 compatible?
12
What publication published an early version of the Apple Monitor by Woz?
5
What changes needed to be made to the Apple Desktop Bus to make it hot-swappable?