What is the Commodore 64C "France version" and why does it need a beefy resistor?

While perusing the schematics for the Commodore 64C (titled COMMODORE-64 B/NE) I came across a suspicious section of the power supply: The unregulated "9V" is connected to the completely separate +5V with a 20 Ohm resistor, annotated with the following:

What is this "France version" and why does it require special care?

I suppose a follow-up question is if this was ever implemented.

Here is the relevant section of the schematics: 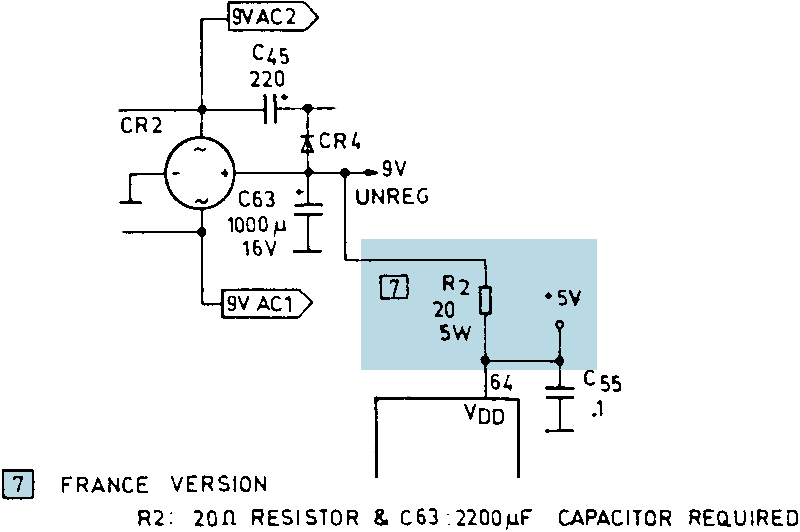 This seems like a kludge for anyone into electronics:

As noted in the question, the resistor is there to allow something to consume more current without voltage dropping too much.

But what consumes more current may not visible in the schematics.

France (and a few other countries) used the SECAM colour encoding for analog television. The SECAM encoding is very different from PAL and NTSC, so it was not possible to produce a VIC-II video chip that would directly output a SECAM colour signal, at least not without huge changes to the circuitry that is.

However, since France used the same 625-line 50 Hz TV system as most PAL countries did, a PAL version of the VIC-II could be used as usual, with an extra step afterwards for the color encoding to be converted to SECAM. This was accomplished via an additional circuit board inside the C64 manufactured by Procep, which takes in composite video or the separate luma and chroma signals near the AV connector, and decodes the color signals.

So most likely the extra resistor and bulk reservoir capacitor are there to allow powering the add-on board which allows connecting the C64 to a French TV. This arrangement allows the system to consume more 5V current, as some portion of the current drawn by 5V circuits is provided by the resistor from the unregulated 9V, so the same 5V regulator can still be used without it heating up too much.

Some people have also speculated that the C64 power supply sold in France was just too weak so they had to modify the C64 to work with it, but that is an unlikely explanation as the context is not seen in the schematics.

Bigger C63 (2200uF instead of 1000uF) indicates the need to better filter ripple of 9V in France version - probably to fulfill more restrictive EMI/RFI requirements in France. In these days bigger capacitors were (and still are) more expensive and Commodore is known for "cost awareness". R2 is same in France and non France version, but anyway, I don't know why it is there. It's quite a strange design for me.

Not the answer you're looking for? Browse other questions tagged commodore-64 power printed-circuit-board or ask your own question.