Which early computer games supported "English" from the paddle controller?

In relation to this answer about the "English" control of the Magnavox Odyssey, I am wondering if the concept found its way into other games for later computers and consoles that supported paddle controllers, and, perhaps, even took some inspiration from this Odyssey feature. Most of the early systems from Atari, Commodore, Apple, and others supported both joystick and paddle controllers, with the paddles being most appropriate for paddle-style games like Pong, Breakout, and the various derivatives.

It is a rather natural UI concept to support "English" (e.g. imparting spin) in these sorts of games by simply rotating the paddle left or right, swiftly, just as the virtual paddle collided with the virtual ball on screen. This would be used to modify the ball's trajectory "in-flight" or following a "bounce", as can be done with spin in billiards, tennis, pickleball, and other "real-life" games where implement is used to strike ball.

Were there any early computer games known to support this style of input from a paddle controller? 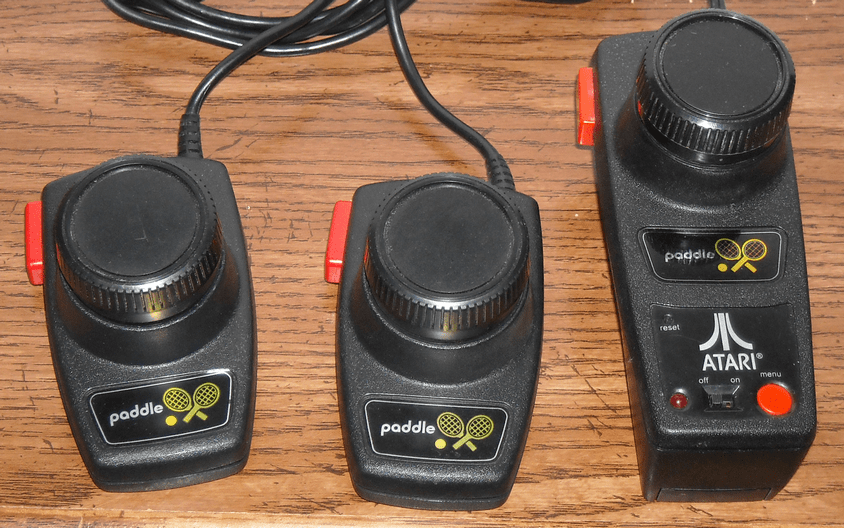 I'd say none, as there was no standard controller element to do so. Paddles allow only one value to be inputted (plus some button) but adding a spin would requite another value with multiple digits plus sign (direction).

Of course and as usual, it's next to impossible that something didn't exist.

The situation is of course different using other methods of input - like keyboard.

Not the answer you're looking for? Browse other questions tagged commodore gaming atari input-devices or ask your own question.

14
Can I run Windows 98 and games from the same era on an AMD Duron CPU?
9
Is there a device that will take composite video from a vintage computer and filter it so it is green or amber like the old monochrome monitors?
8
Were there actually any games for the IMSAI 8080 computer, used in the movie WarGames?