Apologies if this is not the right place to ask this.

When I was in high school in the early 90s (maybe 1992 or so), they took us on a field trip to what I think was a government R&D center of some sort. One guy showed us an optical mouse which had a transparent window with "crosshairs" on it. I believe that it was used to "trace" drawings or schematics that were on paper, so as to digitize them, or maybe aid in the creation of new drawings (the same guy showed us a large color plotter). I have no idea to what kind of system it was all connected. They also had some pretty old stuff at that place, like those big reel tape drives and 8" floppies (already obsolete back then), but they seemed to be somewhat proud of the plotter, and the optical mouse was ahead of its time.

I remembered this the other day while watching a YouTube video about a very early optical mouse. I tried googling, but I couldn't find anything like what I saw. Do keep in mind that I was a kid back then, and this was some 25 years ago, so my memories are probably less than perfect. Considerably less.

Does anyone know of any mouse or device like that?

I think you are referring to what was back then called a digitizer. I believe they were mainly for CAD, but maybe someone who has experience with one could explain how they were used.

At first when I read your question I thought of the old optical mice (not opto-mechanical mice that had a mouse ball) that used a special mirrored mousepad with a grid. Sun workstations used these a lot, but they were also available on PCs.

Graphics digitisers like this were not optical, they were magnetic. 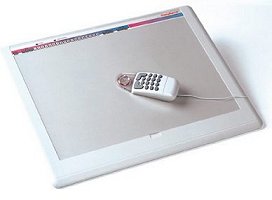 The tablet contained a grid of wires which encoded a small magnetic signal.
You moved either a stylus or, as you say, a device with cross-hairs over the tablet.
As you pressed a button on the stylus, it picked up the coordinates and fed them to the computer.
The coordinates could be picked up with great accuracy.

Apple made such a tablet for the Apple ][ and there were models for the HPIB.

I did see an optical model sold that had a row of LEDs along top and left edges, and detectors on the bottom and right. These passed into history quite quickly.

Some of the early digitizers were off-line machines. In the 1970s We used to have one made by DMAC (sorry, I can't find a picture on the internet).

This was basically a stand-alone device the same size as a desk, with a glass top and the mechanism visible inside. The drawing to be digitized was taped to the glass. The operator used a device about the size of a modern computer mouse with a magnifying lens and cross hairs, that "sat" firmly on the paper to locate the points accurately (no wheels or rollers!), The coordinate were captured by pressing a button which punched the data onto paper tape for input to a computer. IIRC there was also a QUERTY keyboard to punch arbitrary data on the tape (e.g. identifying labels, etc).

The internal mechanism was basically a permanent magnet moving under the glass, connected to a pantograph arm and some position sensors. The permanent magnet tracked an electromagnet whose coil that was wound around the outside of the magnifying lens. If there was a large distance between the points being digitized, sometimes the two magnets lost contact with each other you had to search around a bit with the cursor until they "found each other" again. (It was easy to tell if the machine was still "following you" even when the drawing being digitized was obscuring the view, because the motors were quite noisy).

Despite the apparently crude mechanism, this was a high-precision device The specified accuracy was 0.1mm (0.004 inches) which was far better than the first "flat digitizing tablet" that replaced it.

The machine was also almost indestructible. On one occasion, an electrician decided to stand on top of it to change a light tube in the office, forgot that it wasn't a real desk, and instead of keeping his feet on the edges stood in the middle of the glass plate, shattered the glass, and fell into the mechanism. Having removed the electrician and the broken glass, we simply bought another sheet of glass from a hardware store, checked the accuracy of the machine (which was not affected!) and got back to work. Try doing that with modern computer equipment!

So, I think what you're thinking of is a Calcomp Digitizer -- and the device you're calling a mouse is almost always just called a "puck" or a "cursor" in that context.

5
How did this coordinate capture peripheral work?

8
Cleaning Atari ST mouse and experiences with the USB/PS2 adapter
14
Xerox Parc and the three-button mouse
3
Macintosh Performa 200 Mouse and Keyboard Issue
12
A way to connect Microsoft Green-Eyed mouse to modern computer?
8
Will any serial mouse connect to Classic Macs?
32
Did the computer mouse always output relative x/y and not absolute?
4
Use a USB mouse for DOS games
7
How can I detect mouse wheel movement in QuickBasic?
4
Did the original BBC Micro computer come with a mouse?
1
Commodore 1352 mouse converter