I've been doing a lot of reading about the ways Apple IIc owners expanded their machines in the absence of the IIe's slots, and it's very intriguing stuff. The ones that I'm most curious about are the Z-RAM Ultra series, which expanded the RAM, added real time clocks, and even added CP/M capability a la the Z80 Softcard. My theory at present is that these usurp a vacant slot in the IIc's virtual arrangement, however I don't have a lot to back it up. Comparing the IIc's and IIe's motherboards, it appears that the former doesn't even do IOSEL in the same way as the latter, which I suppose makes sense.

The main reason that I ask is, being a IIc owner myself, I'd like to engineer one myself someday. I'm a bit of a novice with both the II and digital electronics in general, but I think this is a cool learning opportunity.

The 34-pin header includes many, but not all of the 65C02 bus signals. The connector is really purpose-built for these memory expansion boards, and there is firmware in the ROM of the Apple //c that allows them to be used as RAM disk devices under DOS, ProDOS, or Pascal. The memory expansion occupies Slot #4, from the viewpoint of the OS or application software, and supports the SmartPort device protocol to look like a disk ("block") device. It is software compatible with RAM disk expansion cards designed for the //e as well. The normal configuration under ProDOS would allow you to access a new volume called "RAM4" as a RAM disk. See this answer for some more info on access to Apple //c "Slinky" memory expansion.

Since this motherboard connector is connected to the 65C02, other peripherals, such as the mentioned real-time clock are certainly possible. Also, since you are adding a circuit board with memory and firmware, adding additional capabilities like a Z80 to run CP/M also become possible. I suspect that for the Z-RAM Ultra, the Z80 "takes over" the expansion memory and uses it as local memory, while also using its interface to the Apple //c bus to access the other peripherals.

The motherboard connector is not physically like a slot on an Apple //e. The signals available are much more limited. So, I think that 3rd party developers got creative with how they added features to these boards and likely developed proprietary software methods for communication between their expansion board and the rest of the Apple system. The connector is documented in the Apple //c Technical Reference manual, but the information is limited to just the basic schematic and pin-out. I think that 3rd party developers began by just reverse-engineering the Apple memory expansion card to some degree, and later added the multi-function enhancements to make their product more competitive with Apple's.

Update: As pointed out in the comments, the Z-RAM Ultra (specifically asked about by OP) bypasses the memory expansion connector and fits into the IC sockets of the CPU/MMU on the Apple //c motherboard. Thus, it would not be nearly as limited on controlling the 65C02 and everything else connected to it, as this makes it more of a "superset" of the signals available from a regular Apple //e slot and not a subset of those signals. 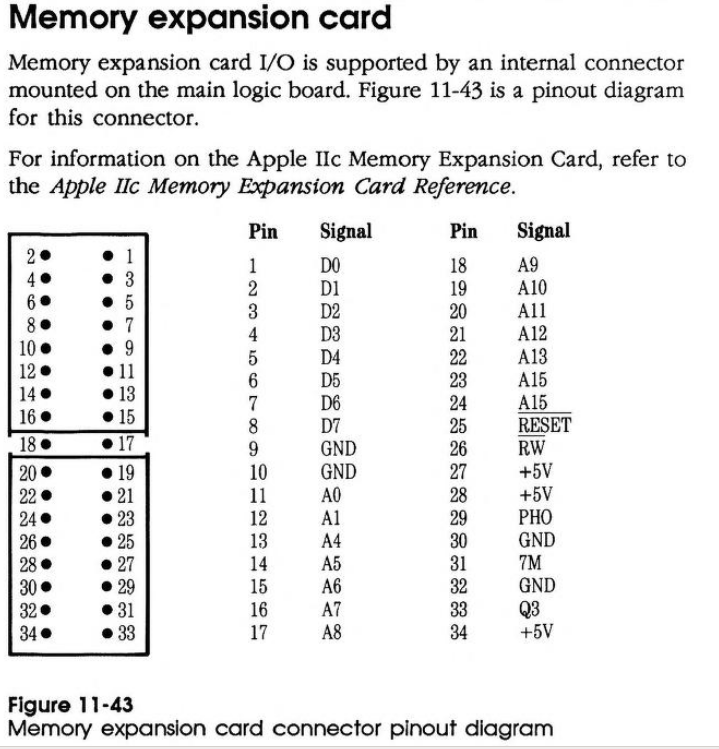 Z-RAM installs into the CPU and MMU sockets of the IIc (the chips have to be removed from the motherboard and placed on the Z-RAM). The memory expansion connector that later IIcs have is not used.

Even if there aren't any physical "slots" in the IIc, its operating system uses "virtual slots" for compatibility with the classic Apple II. (Not much to do with actual hardware, just how the peripherals are presented in the OS)

The IIc is designed to look to applications just like a IIe with a SuperSerial card in slots 1 + 2, an 80-column card in slot 3, a mouse in slot 4 (later ROMs) and a Disk II controller in slot 6.

The Z-RAM places the RAM-disk in slot #3, according to the manual I have (unfortunately, the accompanying card is long lost). There is, however, a utility included that allows you to re-map the RAM disk to any slot number.

The Real-time clock is not assigned any slot, but rather accessed through memory-mapped registers (OKI 6242B RTC at $C060-$C06F). The Z-RAM apparently came with a specific ProDOS driver to integrate the RTC.

The manual I have doesn't give a lot of details about the CP/M implementation and the Z80B it has on board.

6
How does the Apple II address more than 128KB of RAM?