When was a compiler first used to generate code to be placed in ROM?

In the early days of compilers, it was expected that programs would generally be stored in an inexpensive medium (such as punched cards or magnetic tape) when not in use. Although it was possible to construct hard-wired read-only memory, very few programs would represent a large enough fraction of a machine's workload to make doing so worthwhile.

By the time of the Apollo Guidance Computer, it was clearly established that there would sometimes be a need for computers which were purpose-built to run one particular program, but the software for the AGC was written in assembly language, rather than in FORTRAN or any other compiled language.

When would a compiler have first been used to generate code which was intended to be permanently built into a computer, or be used to a sufficient degree that having it some hard-wired medium (such as rope memory or electromagnetically-readable punched cards) would be more cost-effective than having it in RAM? Would any special accommodation have been needed to separate things that would be modifiable at run time from things that would not?

SAGE was a system of computers used by NORAD from 1957 to the 1980s. The hardware was designed by MIT Lincoln Laboratory, derived from their Whirlwind I computer, itself the first computer (1951) to have core memory. The CPU (AN/FSQ-7) of SAGE had two banks of core memory:

The FSQ-7 and -8 used core memory with 32-bit words plus a parity bit, operating at a 6-microsecond cycle time. Both machines had two banks of memory, memory 1 and memory 2 (Commonly referred to as Big Mem and little Mem). On the FSQ 7 memory 1 had 65,536 words and memory 2 had 4096 words.

Drum memory was also used, due to the enormous size of the software. The hardware was manufactured by IBM. Each of the 24 installations used 2000 m2 of computer space weighing 250 tons and using 3 MW of electricity. The cost of the entire SAGE system (including non-computing elements such as radar) cost more than the Manhattan Project.

The following paper is a description of the organization and techniques we used at MIT's Lincoln Laboratory in the mid-1950s to produce programs for the SAGE air-defense system. [p. 1]

We can compare the electronic-design phase with the development of basic programming techniques of translation, compilation, and interpretive routines. Scientific and engineering calculations have been assisted by the PACT and A-2 compiling systems, and commercial data processing by BIOR and B-0 (to name but a few). [p. 4]

A figure in that same paper shows that some compiled programs were targeted to core memory: 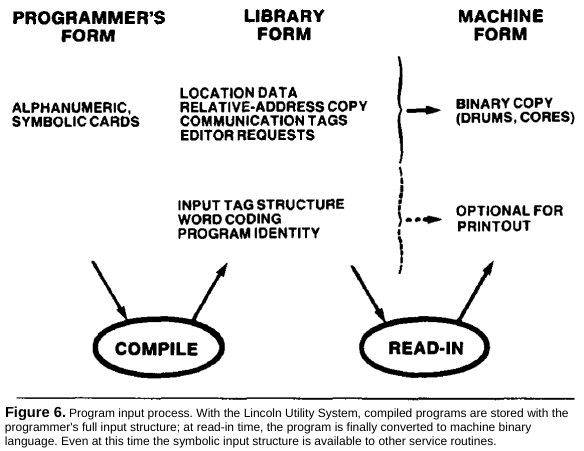 Not the answer you're looking for? Browse other questions tagged compilers early-computer or ask your own question.

3
Was there ever a compiler type that was just large enough to contain a memory segment?
21
Would a C compiler for the Apollo Guidance Computer be plausible?
6
Why is the following p-Code generated by the Apple 3 pascal compiler?
2
Was parsing or operating systems the first user of dollar sign as end of string/input?
9
What was the first LISP compiler?
37
When and why did high-level language compilers start targeting assembly language rather than machine code?
30
When did compilers start generating optimized code that runs faster than an average programmer's assembly code?
9
What was the first compiler/interpreter/assembler to indicate problematic columns in diagnostic messages?
10
What sort of intermediate representation did the first Fortran compiler use?