How did the Amiga DCTV work

This is an unusual question since I'll answer it right away because it was a truly unique device and there is absolutely nothing about the technology it used on the internet. I spoke with the hardware designer, and for the first time we can understand how it worked.

The DCTV is a hardware device from Digital Creations that connects to both the video port and the parallel port of an Amiga.

It is able to output a picture with full color video composite quality and also digitize a composite video signal. 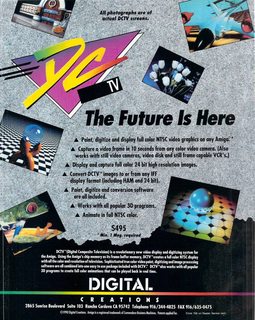 The specs are as follows:

Here is the device: 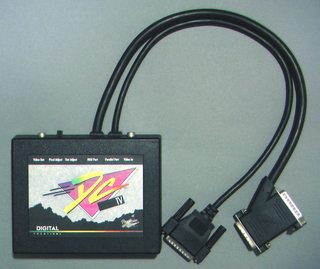 There is a YouTube video showing it in action.

It would take the regular frame buffer output, displayed as is from the Amiga, in which you could kind of see the shape of the final picture, and turn it into a full color image. The onscreen display was spectacular, but I could never figure out how it was working.

After some research, I found the hardware engineer that built the DCTV and we exchanged some messages where he explained the system.

This is the unedited text:

Wow, it has been a long time... I didn't really remember! Luckily I still have all the lab books and design notes from those days filed away. We used a technique that encoded the data on two consecutive lines in the Amiga frame buffer in a way that we could reconstruct a composite video signal when run through some processing and combined with data from the previous line (delayed through a line memory). I know that is pretty ambiguous, but it is a general description. I will describe in more detail below, but it assumes some familiarity with NTSC composite video signals.

In more detail: Amiga had a frame buffer mode that displayed 736x483 pixels, but only 4-bits per pixel (16 colors). We used that mode, but re-interpreted the data. We combined alternate pixels so that we had 8-bits per pixel at half the rate. Even (I think) lines stored data as Y + (R-Y), Y - (R-Y), etc. [Luma +/- red color difference value, alternating] at a 7.159MHz sample rate. Odd lines stored data as Y + (B-Y), Y - (B-Y), etc. [Luma +/- blue color difference value, alternating], logically shifted by half a 7.159MHz sample. So every line would contain every other raw sample for an NTSC composite video signal. In order to reconstruct the missing data, it would generate the Y component by averaging the values left and right of the missing sample, and the chroma component by subtracting the two adjacent samples from the previous line. The final value was created by adding these values together. The resultant data stream was at 14.318MHz and contained Y+(B-Y), Y+(R-Y), Y-(B-Y), Y-(R-Y), etc. When converted to analog and added sync and so on the resulting signal was a full color composite signal that looked surprisingly good.

So it was really a way to get full color out of the Amiga frame buffer by applying some signal processing techniques to trade off spatial resolution for increased colors. Instead of a frame of 736x483 pixels of 16 colors, we got an effective resolution of about 368x483 pixels of full NTSC type color. Chroma resolution was less (as with any composite NTSC type signal), including somewhat less resolution vertically. But it looked pretty good by 1990 standards! We found that we could even stream data off a fast (for the time) hard drive in real time, and used to demo by playing back scenes from "Back to the Future" at trade shows. Fun times.

Then me asking a bit more:

You have cleared a mystery that was popping back in my mind now and then! It is true that for the time, the output was very good! so you could probably fit the decoding logic in a cpld?

The decoding logic fit in a 3000 series Xilinx FPGA. The line memory was external, along with the D to A converter and a few other things like a PLL for the pixel clock. I think the final product had an A to D converter for grabbing images from an external video source as well...

I will let him know about this thread just in case there are more questions, to see if he wants to participate.

Not the answer you're looking for? Browse other questions tagged amiga video or ask your own question.

9
ZX Spectrum PAL Composite Video to North American Monitor
9
Alternative to Amiga 520A Video Adapter
10
Can artifact color mode create 262,144 colors on Amiga OCS?
14
Who invented scrollable screens in Amiga?
39
Why did computer video outputs go from digital to analog, then back to digital?
6
Are there standard DIN pinouts for cassette and video ports on early Japanese 8-bit computers?
15
How did the Apple 1 video circuit work?
5
Could monochrome systems produce better output for monitors than TV sets?
8
Why does the Amiga 500 have half the HSYNC pulses seperately compared to those in CSYNC?
13
Why didn't early color TV sets accept RGB input?