I have acquired a nice MS-DOS PC from EET Computer (I couldn't find any information about them).

It actually works, but I have two errors on boot:

The motherboard itself is in good shape aside from the side with the VLB and ISA ports (I/Os) which has bluish-green corrosion that spreads across the motherboard and the ISA and VLB ports.

The corrosion also seems to be removing the thin green protective layer of the motherboard that prevents unwanted contacts.

The VGA VLB and Floppy disk drive controller cards also have corrosion on their connectors. 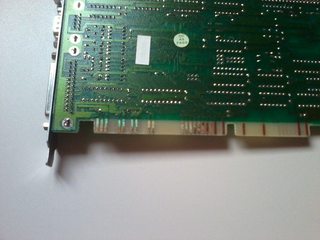 The battery also seems to be rusting, it's completly stuck to its connectors. I have to replace it to avoid it leaking on the motherboard.

This is what is written on the CMOS battery:

How can I remove the corrosion and stop it from spreading? And how can I replace the CMOS battery, should I go for a coin cell battery?

Disclaimer: This answer is not known to be accurate.

From the information you've provided so far it's tricky to give complete advice, but here's a start:

The low CMOS battery error might be caused by battery leakage; from what I've seen of leaky batteries, they do appear rusty. This can cause significant damage to components. To neutralise the battery acid (which is actually alkeline), pour vinegar on the affected areas and leave it to soak for ten to fifteen minutes.[1]

To remove rust and corrosion, use isopropyl alcohol and something soft (e.g. cotton bud, toothbrush, other soft brush).[1][2][3][4] It can be more effective to soak the board, but you must ensure that the alcohol does not enter any speakers or other sensitive components.[2] It's possible that there could still be dissolved or loose residue on the board after cleaning; distilled water can be used to remove this (either by soaking the board in it or by pouring the water onto the board).[2]

From your description of the battery, it is a standard 3.6V rechargeable Ni/Cd battery.[3] For these instructions, I'm assuming that it looks something like this: 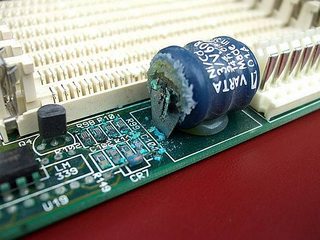 This is tricky to replace. The first step is to remove the battery. This can sometimes be done with side cutters,[3] but you can also de-solder the battery if this is too hard.[3][4] If there's glue still attaching the battery to the motherboard, gently rock the battery from side to side until it becomes loose.[4] Once the battery has been removed, you might want to clean the area some more so that the new battery isn't damaged by remaining leakage. Assuming that your board doesn't have a replacement battery slot, you can solder two wires to the gaps and connect them to a replacement NiCd battery that remains external to the board, so that the board won't be damaged when it leaks again.[3] As Richard Downer's answer says, ensure that you don't wire a non-rechargeable battery in such a way that it charges. It's probably best to go with a rechargeable instead, just in case.

Your floppy drive controller might be failing because the capacitors have failed. This is bad, not only because they require replacement but because they leak a corrosive substance that can damage the board.[5] To replace them, you need to de-solder them from the board. First, check whether they're actually bad. You can do this by testing the components, but it is sometimes easier to check visually (though not all capacitors fail visibly![8]). See if you can spot the failed capacitors in this image: 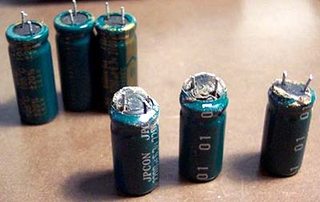 After you've identified the faulty capacitors, you need some replacements. Find, buy, borrow, salvage or otherwise get your hands on some capacitors that have the same "stats" as on the existing ones. It's best to get a capacitor with the same capacitance and at least the same voltage,[7] but a higher capacitance also may work for many capacitors on a mainboard. A higher voltage rating is no problem, but don't go for less or it may explode![11]

On to de-soldering! There are a few ways to go about doing this; the one that I've found easiest (with other components) is melting the solder on one leg, pulling it out as far as it will go without breaking, then repeating on the other pin, alternating pins until it comes out. You might see some gunk near or underneath the capacitors; this can probably be cleaned off using the same method as outlined in the above "Removing corrosion" section, sans vinegar (I'm not sure whether this would neutralise the electrolyte or make it worse). If this doesn't work, gently scrape it off the board, taking care not to damage everything further.[7]

Often, solder will remain in the holes that you took the old capacitors from.[6][7] This can make it hard to push the new capacitors in without damaging them (don't try). There are a few different methods to remove the solder; they are listed here in one recommended order:[6]

If the capacitor legs still refuse to go in for whatever reason (solder attached to the legs, the legs being too big, etc.) you can clean them with sandpaper so that they fit.[7]

When replacing the capacitors, make sure that they go the right way round, otherwise Bad Things™ may happen.[7][8] With any luck, your board will look like this:

Usually, the negative side has dashed lines and the positive side is marked with a +.[6][9] However, there are some non-standard manufacturers who put the dashed lines on the positive side,[9] so make sure to check which side is which. Once you've identified this, put the capacitors into the holes the right way around. Capacitors are often marked with negative signs on the negative side[6][9] and the positive leg may be slightly longer.[6] After they are in the holes, trim the legs with side-cutters[9] so that they stick about 2mm out of the board,[6] then solder. If you solder then cut unnecessary stress may be put on the board,[6] but this is probably not enough to cause significant damage.

wizzwizz4 has a good answer about cleaning up the corrosive chemicals to stop the damage getting any worse, so I won't duplicate that information. But here are a few more suggestions. My experience is with the Amiga computers, where the retro computer enthusiasts speak of Varta with howls of anguish - the damage you have seen here has affected thousands of vintage Amigas in the same way. Hopefully much of the advice would apply to your mainboard too.

The good news is that the damage is often repairable. Components such as the sockets can often be desoldered and replaced. The chemicals may have corroded some traces to the point that they are broken, but patch wires can often be used to bypass the damaged area and restore connectivity. This is a specialist skill so you may need to find an expert in vintage computer repair to do this work for you.

It is probably possible to replace the NiCd battery with a coin cell (CR2032 or similar). However you must place a diode in series with the new battery - otherwise the charging circuitry will try and charge up the non-rechargeable battery. Ready-made coin cell adapters with the same footprint as the rechargeable battery and the necessary protective diode can be bought for Amigas (example), and it's likely they would work just as well on your PC mainboard.

The fluid leaking from the battery has likely spread out across the board in a general radius away from the battery. In photo 1 you can see the exposed copper trace above the slots is corroded at least 10cm to the left of the battery.

The controller card itself shows damage to the full length of the edge connector, so likely all the adjacent unused slot sockets in at least a 10cm radius from the battery have been similarly damaged.

You will need to desolder and replace all of the slot connectors, which is exceptionally tricky due to the high pin count on the bottom of each. If any one pin is still attached even partially, you will not be able to budge the damaged slot connector. Though since it is damaged already, you might be able to crush the plastic card-edge connectors and remove the old soldered pins in segments.

The integrated circuits near the main power connectors may be hiding damaged board traces underneath them, so you are also going to need to desolder these to inspect what is below them.

Chips do not tolerate heat very well so there is high risk of damaging them during the desoldering and resoldering process. There are clamp-on heatsink tools available that grab onto the pins to dissipate heat before it enters the chip casing and damages the silicon. This tool is very inexpensive but must be moved to the next pin so the board must be repeatedly flipped over during desoldering.

If you are going to go through all this work, it is reasonable to consider installing chip sockets where direct-soldered chips are removed. Though desoldered chips may not plug easily into new sockets due to solder residue on the pins, making them irregularly shaped.

Not the answer you're looking for? Browse other questions tagged restoration ibm-pc battery or ask your own question.

9
Will an eMac boot without a PRAM battery installed?
9
Powerbook (140, 170) battery dimensions/components/specs for reverse engineering
19
Game cartridge save-game battery lifetime
16
Appropriate battery replacement for my A3000
7
Is it safe to provide 5V to CMOS RAM from PSU instead of CR2032 battery?
2
How to replace battery for old AT mainboard?
4
Can you replace an Apple IIgs battery with regular AA alkalines?
4
How to work around the PRAM battery for a "Titanium" Powerbook G4
2
Can I change laptop's RTC and backup battery with generic Ni-MH?