Cheapest way to store and load small dataset in the 80s?

An extra, costly floppy drive would overkill when transferring a page of letter, storing game level data, or distributing a piece of BASIC program, and non built-in ones have to be paid. A tape recorder matches all these aspects in a lesser way, sooner or later.

For users outside of world of data-heavy paperwork, what are cheapest solutions, consumables and peripheral counted, to manage reusable media of, say, several kB to several hundred kB in the 70-80s?

To begin with, Ti-59 magnetic strips can hold 480 steps each of custom program. Disassembled. 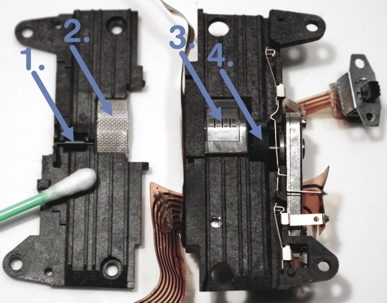 PS: From a retrospective point of view, a home PC cheaper than a cassette player should have had deserved some cheaper means of storage, shouldn't it?

Punch cards were the cheapest storage medium for small data sets. Remote Job Entry terminals such as used by Control Data Corporation included a card reader and line printer. The initial member list for 3PBS-FM was stored on punch cards then membership lists could be produced by printing the deck at no cost. Cards could be punched at no cost. So Punch Cards were zero cost, small data set storage that could be fed into a computer system for processing. When it came time to transfer to an IBM system the cards were read into the CDC Cyber and a magnetic tape written for data transfer to the IBM system. Assuming you eventually realize the 6-Bit characters from the CDC world are not going to make sense to the default IBM character set. This was a zero cost, data transfer from CDC to IBM.

Alternatives to standard Punch Cards were the IBM Port-A-Punch cards and then Mark-Sense cards. These could be used to record small data sets and did not rely on a punch card machine to program their cards. Catch with the Port-A-Punch cards were they could drop chads in the high speed card readers which would alter the data or program. Mark-Sense cards could only be read on appropriate card readers such as the Documation M600, HP readers, etc. Typical installations at schools and universities, etc., would have an associated line printer. Again, zero cost, small data set storage and processing.

Next step up in cost were audio cassettes and at slightly higher cost there were data cassettes using the physical standards for audio cassettes. Early microcomputer systems such as the National Semiconductor SC/MP kit, Motorola MEK6800D2 Kit, etc., all provided audio cassette interfaces. For example the SC/MP Applications Handbook, 2C4-1 'Interfacing a SC/MP System To A Cassette Recorder' references a $40 Panasonic RQ309AU cassette recorder for accuracy and reliability tests.

Manufacturers could also modify cassette transports to increase speeds by removing the audio circuitry and using NRZ encoding with an appropriate interface. This increased the cost of the cassette interface. Although data storage cost was still the cost of storage. Commercial manufacturers produced their own cassette transports such as the DEC TU-60 Dual Cassette Transport with TA-11 Cassette Interface could also use audio cassettes for data storage for PDP-11 systems with the CAPS-11, RT-11, RSX-11M operating systems. That is the data storage was the cost of an audio cassette while these could be read at home on hobbyist or on commercial equipment.

Next step up in costs were storage systems like the Exatron Stringy Floppy Drive for the TRS-80. These used a unique storage media that did increase cost. Cost was the trade off for higher speed.

Floppy disks would be the next most expensive storage media and they went through a surprising number of generations. Refer to the List of Floppy Disk Formats on Wikipedia.

Next most expensive media was magnetic tapes and they were followed by disk packs.

Edit:- Should have included paper tape in the comparison of storage costs. Catch with paper tape was the initial production of the tape as it required an ASR-33 Teletype or some other form of punch equipment e.g. Heathkit H10 Papertape Reader/Punch or DEC PC05 Paper Tape Reader/Puncher. Typically you had to buy a box of blank tape that was typically much more expensive than a single audio cassette. The Oliver Audio Engineering OP80A paper tape reader was the cheapest means of reading paper tapes while the Heathkit H10 provided a complete paper tape solution.

The cheapest mechanism was paper. The storage method was printing it out. The entry method was typing it in. This is a tried and true technique that flourished into the 90s and is arguably still used today, save it's now known better as "cut and paste".

Most every type of mechanic was used in the past to widely distribute software and data, paper was the dominant form. I can hold any number of thousands of magazines that relied on this mechanism for wide distribution.

Other mechanisms were also tried. Bundled tape cassettes, bundled records like vinyl records, only flexible to survive shipping. For a short period there was a bar code style scanner that you could buy and read source code from magazines like Dr. Dobbs. But the device was at least $100 to purchase, and it didn't last long. There were also radio broadcasts of software, but those required cassette interfaces. Inevitably, of course, this evolved in to CD-ROMs.

Remember 101 BASIC Games? How was that distributed? And how popular was it?

A paper card reader is extremely expensive. A paper tape reader is also expensive. To quote the lawyer Gennaro from Jurassic Park: "Is it heavy? Then it's expensive."

BASIC, FORTRAN, LISP, assembly, Forth, HEX DUMPS, all of these have been shared via print to be coded in by the user. I distinctly recall typing in, twice, with a friend, an extensive hex dump of a Life program for the PET. It never worked, either time, and we were pretty thorough that we got the codes right. So I don't think it was us.

Later, magazines would introduce programs (which were typed in) that let users type in code and added checksum and other verification techniques to better ensure error free transfer of the data.

So. If you want cheap, the printer is over there. If you want really cheap, here's a pencil. Is it efficient? It was efficient enough to be the primary mechanic for a wide range of enthusiasts for 10-15 years. So, it's got that going for it.

The cheapest ways for storage of data are the ones that are high-volume, off-the-shelf products that are not specifically produced for the computer market - and operate on high-volume consumer electronics. The compact cassette player (a cheap consumer device, not an expensive specialized computer manufacturer product) that could be had for less than $20. The example you give (TI magnetic strips) is the exact opposite of this (small market, specialized product, small customer base), so might have been cheap to manufature, but definitely not cheap to buy.

You could use cassette. GWBASIC still supports the cas: device.

In essence, its output was as in a modem, but the thing was recorded onto ordinary cassettes. The files were stored sequentially, so you had to wait for the tape to go through.

Then floppy disks came along, and you could store stuff on that, using microsoft's innovative fat5 (6.2 names).

Not the answer you're looking for? Browse other questions tagged game-cartridge 8-bit-microcomputers storage magnetic-tape home-computers or ask your own question.

19
Which (micro) computers were dominant in Australia and New Zealand in the 1980s?
17
What is the difference between DriveSpace and DoubleSpace?
12
What is the best way to connect an old Tandberg QIC tape drive using today's computers?
5
Why are the internals of NES Gamepaks so small compared to the case?
6
Did the Timex Sinclair 2068 and the Sinclair ZX Interface 2 use totally different hardware and software techniques?
33
When and where did the $ convention for hexadecimal literals originate?
7
The proper way to shift a byte using a Z80
35
How fast were BASIC interpreters in the 80s? (Is this optimization for speed really necessary?)
37
Why do Game Boy games have explicit save functions, instead of using battery-backed non-volatile cartridge SRAM to store the game state?