Can the window only be moved once per frame on the Game Boy?

I wanted to cover the top part of the screen to use as a status bar for a game. My idea was to use the Game Boy's window feature to do so. But I ran into a problem: The window's size is fixed to be the entire size of the screen, and while it can be lowered so that the window slides down towards the bottom of the screen revealing the background towards the top, the reverse can't be done.

So I thought "That's ok, I'll use a horizontal interrupt to move the window off screen at a specified scanline." I was thinking that if during vBlank the window Y coordinate was set to 0, it would only cover the screen up to the specified scanline, and then disappear for the rest of the screen draw, resulting in a status bar fixed at the top of the screen (think Zelda: Oracle of Seasons). But this isn't what happens at all! I'll show you what happens:

This is what happens if I use an LYC interrupt to set the WY register to scanline (decimal) 20. It works as intended. There is no reset of the WY register during vBlank in this screenshot. 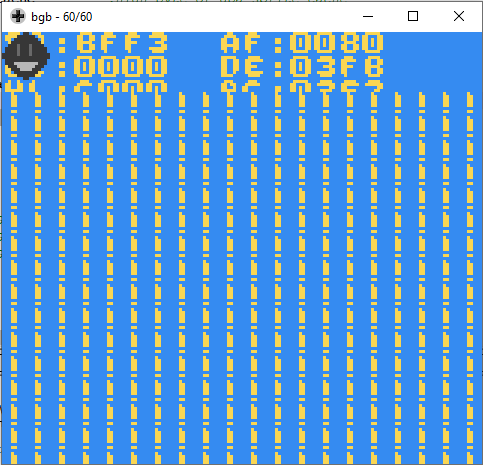 Now, this is what I get when I set WY to 20 at scanline 20 using an LYC interrupt, and then during vBlank set WY to zero. The window covers up the screen the entire time? That doesn't make sense... 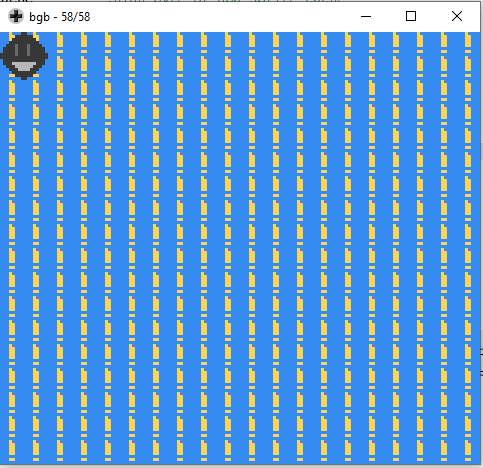 ...unless the Game Boy has a hardware limitation that the window can only be moved once per frame. Is that the case?

(It could be a bug in my code so I'll post it below:

EDIT: I figured out a way to do what I want but it makes no sense. I ported my code to a minimal example and used these interrupts: 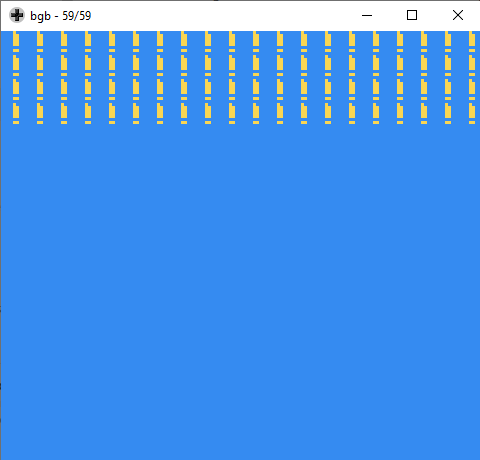 This is what I was trying to do earlier! So now I'm even more confused than before. Why does altering the window X register do what I thought Window Y would do?

The WX can be freely changed during a frame but the WY cannot. From pandocs:

For the window to be displayed on a scanline, the following conditions must be met:

WY condition was triggered: i.e. at some point in this frame the value of WY was equal to LY (checked at the start of Mode 2 only)

WX condition was triggered: i.e. the current X coordinate being rendered + 7 was equal to WX

To me that says the window is activated for the rest of the frame when LY is matched, so to hide the window mid-frame you'll need to manipulate WX (as you've found).

Try running your rom through a different emulator.

Try running dmg-acid2 on the emulator you're currently using to see if it handles all the various combinations of mid-frame parameter changes.

dmg-acid2 runs on real hardware and shows the correct graphic, and it seems to do a lot of window manipulation.

Not the answer you're looking for? Browse other questions tagged assembly graphics 8080 game-boy or ask your own question.

2
Why did this Hitachi 6301 assembler routine only work once?
2
Game Boy save problem
9
How does Game Boy / Sharp LR35902 HRAM work?
22
Did the Super Game Boy (1) run 2.5% or 4% faster than a Game Boy?
26
How did DOS games manage to have multiple background layers?
6
How can I detect signed integer overflow on the Game Boy?
8
Is "scroll tearing" a symptom of scanline interrupts taking too long?
2
Timer B Interrupt occurs only once
5
Z80 CPU and nested/reentrant NMI