BYTE Magazine outside the U.S

BYTE magazine was a well-known computer periodical published in the U.S. that had a successful run from the late-1970s to the 1990s. As such, it was not only a regular fixture on U.S. newsstands, but was rather distinguished from the competition. It billed itself as "The small systems journal", and was special, at least in my estimation, because it was not platform-specific (covering all manner of microcomputer tech) and because it was geared toward a more sophisticated (e.g. professional or "prosumer") user audience.

I have never personally seen a localized issue of BYTE magazine, such as might have been locally distributed outside the U.S. Was BYTE widely distributed in Europe or Asia at that time? If so, to what extent was the content the same as the U.S. content. In other words, what aspects of the magazine were "localized"? 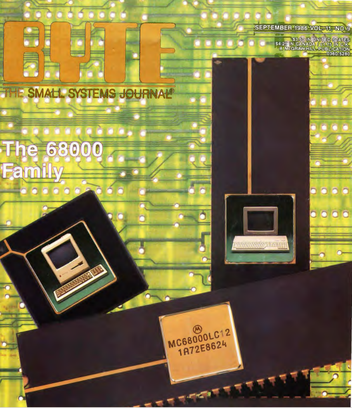 BYTE was distributed internationally, and it had an international supplement (printed inside the magazine, same as the US regional supplements), at least in the late 80s and early 90s; that was the extent of its localisation, all the other content was identical (including the adverts). It was fairly widely available in the UK (I got mine from WH Smith’s in Rhyl, and John Menzies in Glenrothes). I don’t remember seeing it much in other countries, outside large cities — I bought issues in Paris, Lyon, and Rome. But I know a few people in France who had subscriptions.

It had a similar reputation (deserved or otherwise, especially in the 90s) in Europe as in the US, at least with people who were aware of its existence — more technically astute than many other magazines (see this letters page for example), with extensive coverage of emerging technologies (it’s no surprise that it provides so much reference information for answers on this site). That was why it was imported, by some news outlets, usually along with a selection of other noteworthy US magazines (the newsagent I used to buy it from also imported PC Magazine, Dr Dobb’s, and PC Techniques) — its reputation was good enough, and/or its content unique enough compared to local offerings, for locals to buy it.

The local competition in the UK was mostly Personal Computer World as far as I remember; in France, Science & Vie Micro or l’Ordinateur Individuel (in the 80s). The local markets had many other magazines but those two are the closest contemporaneous matches to BYTE that I’m aware of. But regardless of each magazine’s merits, BYTE (like all other imported magazines) would have sold far, far less than local magazines, so it’s not all that relevant to compare them.

Of the big US magazines, PC Magazine had a much bigger presence, and had completely local offshoots in several countries (e.g. PC Expert in France from 1992 onwards). 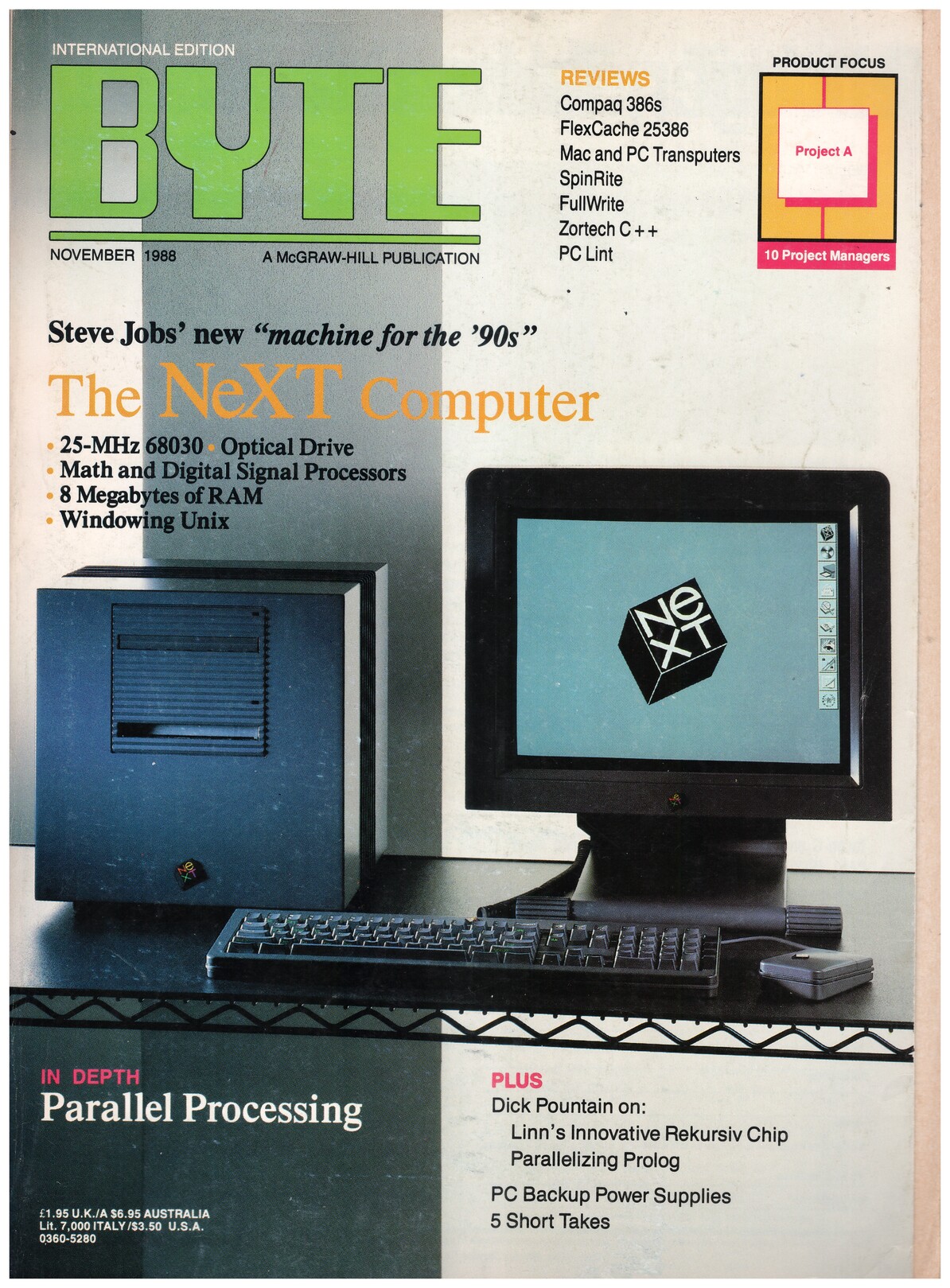 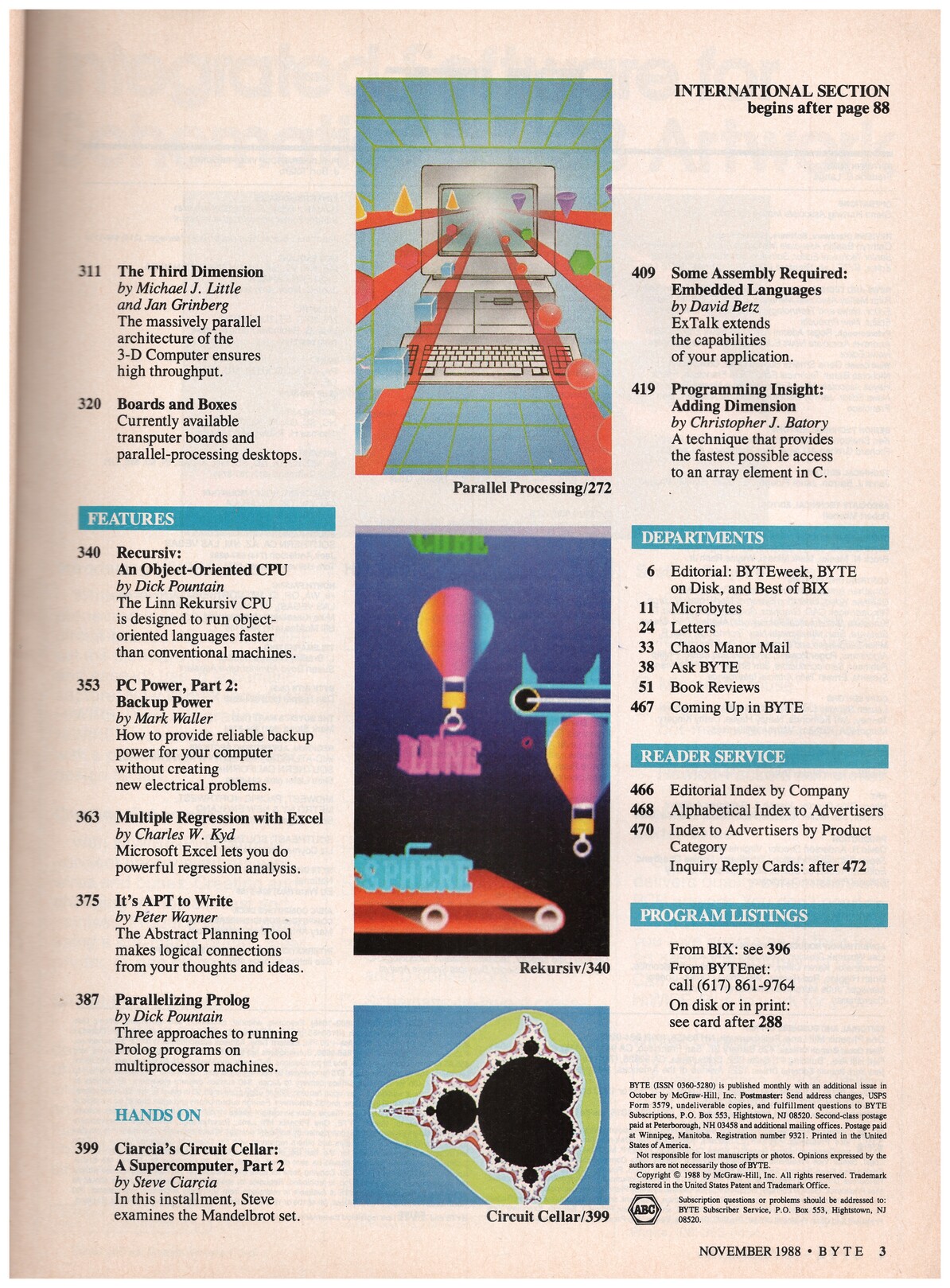 The 52-page (plus cardboard inserts) international supplement itself gets its own Frank Miller cover: 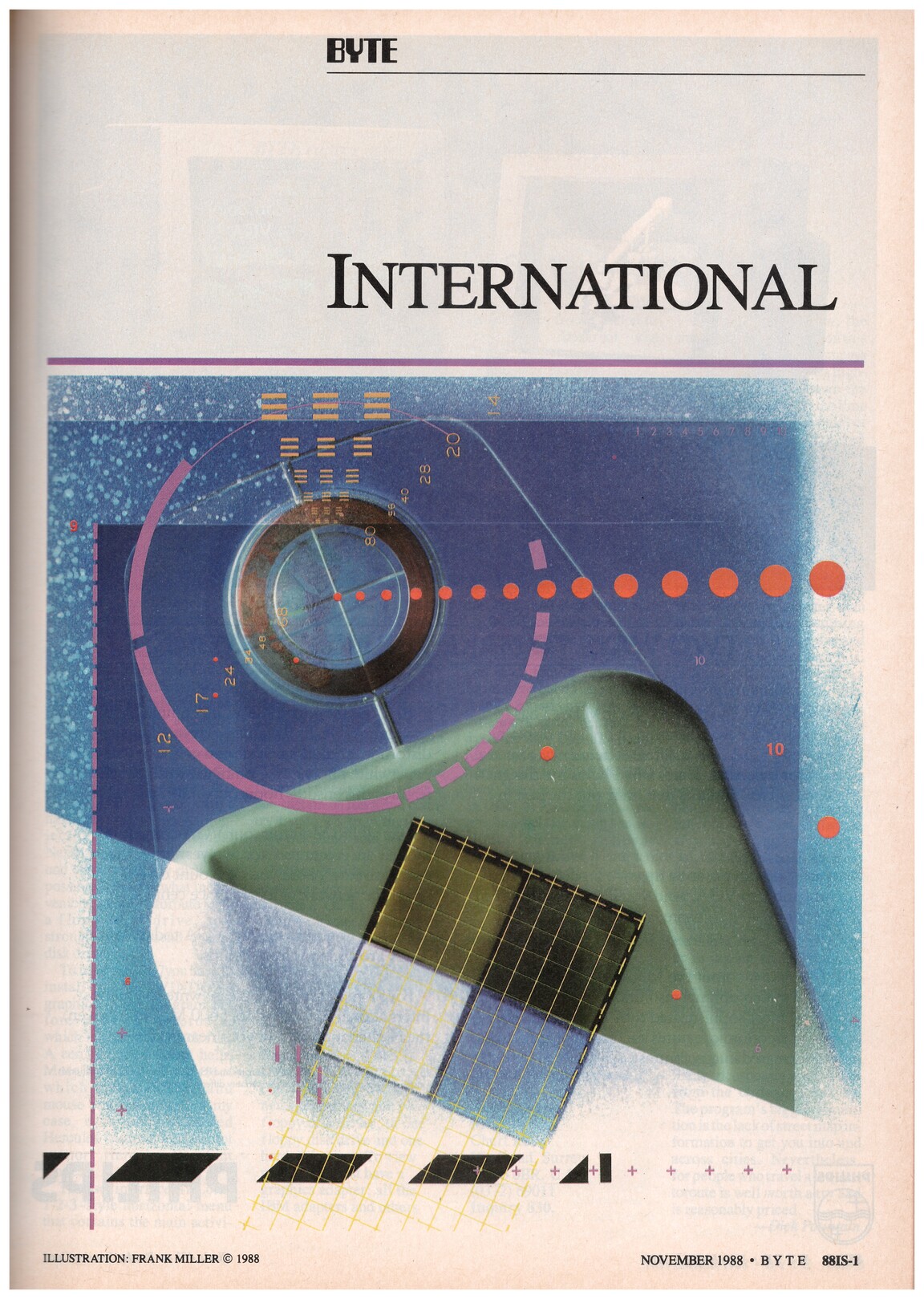 It contains a review of Autoroute, route-planning software published by the UK-based NextBase Ltd., and regurgitated press releases, along with mostly-non-US adverts (e.g. Elonex, and the typical Grey Matter which will bring back memories to readers familiar with the UK computing press of the time). The press releases in the “What’s New” section emanate from the UK, West Germany, Japan, France, Italy, Belgium, Taiwan, Australia, Thailand, and Switzerland, from both local companies and subsidiaries of US companies (Microsoft makes an appearance).

In Czechoslovakia, the equivalent was Bajt (Czech and Slovak orthography of the word /bait/; at that time, both "bajt" and "byte" spellings were in use). Established in 1990, it was not a subsidiary, but a completely independent (and independently financed) magazine, founded by famous Ladislav Zajíček. It was inspired by BYTE and there was also some sort of a collaboration.

[This is mostly about Germany/German speaking countries]

I have never personally seen a localized issue of BYTE magazine,

There wasn't one, AFAIR.

Was BYTE widely distributed in Europe or Asia at that time?

Yes, at least in Germany one could get Byte around 1980s in any major rail station, foreign newspaper stores and of course computer related stores.

Similar for other magazines to a lower degree. Then again, during the 1980s, UK magazines, were at least as numerous, if not more easy to come by.

If so, to what extent was the content the same as the U.S. content. In other words, what aspects of the magazine were "localized"?

There was an attempt to add 'international' content, not at least by adding an international section somewhen in the early 1990s. But it did not really increase readership. At least in Germany. Also, during the mid 1990s German magazine did start a cooperation by incorporating translated articles - didn't go well with the readers, as quality was conceived way lower.

Byte was always a magazine inbetween. Not really on the engineering side nor being a pure user magazine. Byte most important asset was was its huge non specialized add section - which wasn't as helpful outside the US.

PC Magazine did a way better approach by being way more user focused and issuing local editions in many countries thruout the 1990s, like PC Professional in Germany.

Yes and no. It had a good reputation, but readership declined quick already in the first half of the 1980 as magazines like Chip and c't offered similar or better content (*1). Not to mention more 'hard core' publications like MC.

*1- Both with several foreign language editions by now. The Russian wiki entry for Chip gives a good overview.

ASUS had issued 《0與1科技》雜誌 (literally 0 & 1 technology) since 1981 in Taiwan which was subtitled as BYTE 中文版 (literally BYTE Mandarin Version). Further relationship is unclear. Its website http://www.01magazine.com.tw/ is available on archive.org. 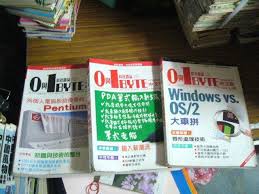 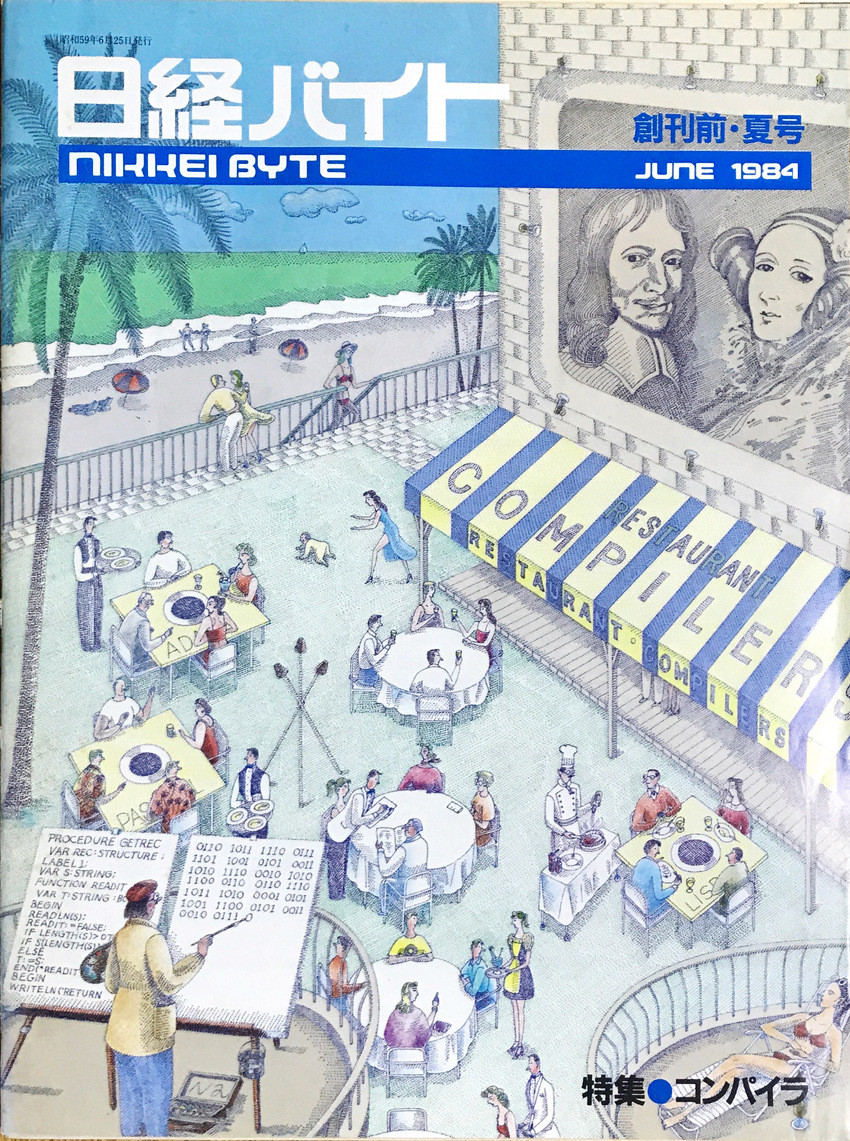 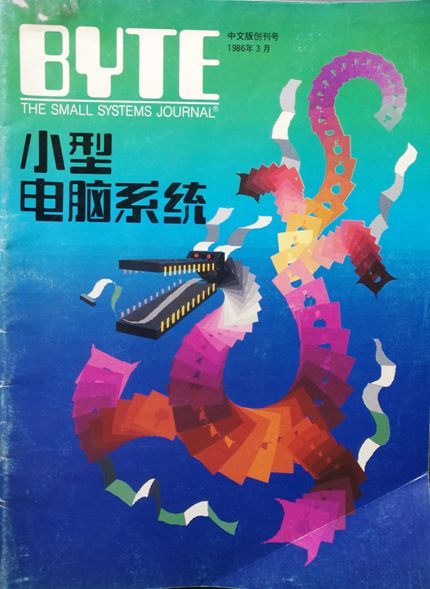 Hungary had a local variant (BYTE Magyarország, meaning BYTE Hungary) that was a locally edited monthly publication. As far as I can remember, it was compiled from translated articles of various publications of the original BYTE publications but edited and compiled as the editors wanted, so not simply a translated copy of the current BYTE issues.

It started in December 1997, published by a company apparently a Hungarian daughter company of (or at least closely affiliated with) McGraw-Hill. When the US BYTE was sold to CMP Media, the references in the impressum were also changed to CMP Media.

According to data from the Hungarian National Library (OSZK), it was published until June 2002, although the references are not that clear, I think it was a CD-ROM-only publication near the end, not the regular paper monthly it started. ISSN 1589-3782.

(I was a regular contributor of article translations, from the first issue until November 1999.)

BYTE used to be available at well-sorted newsagents all over Europe (I can confirm UK, Germany, France, Italy and Spain at least) starting from the late 80s. I don't really remember a European or international supplement being part of it.

I do recall to have been regularily (not) impressed by the - at least for continental Europe - totally uncommon relation between editorial contents and advertisement (you'd have expected much less paper and much more "hard stuff" in a local magazine).

In Milan, Italy, I often bought BYTE at a major bookshop with a good selection of science and technology publications. It was exactly the same US edition, but I have vague recollections of some Italian computer magazines occasionaly reprinting selected translated BYTE content. There definitely wasn't a local edition or supplement though.

Although highly-regarded, BYTE was relatively little known even among computer enthusiasts here. I'd say a comparable Italian periodical was MC-microcomputer.

To me, the advertising was as valuable as the editorial content. The reader service card was a great way of getting additional interesting material from advertisers and vendors such as brochures, white papers, product catalogs, floppy disks with program demos or other software, booklets, manuals, and more. Back then this kind of technical material was hard to find, especially in Italy.

In Australia, Byte was the bible into the late-eighties, early-nineties. The ads were as important as the technical and opinion articles.

Eventually in the nineties Byte licensed some of its content to an Australian-produced and printed magazine. I think it was called Just Computers. It never reached the thinkness or advertising support of Byte, but it had enough component advertisers that made it worth buying.

By the mid-nineties, corporate computing had moved on to brand-name PCs: IBM, Dell, Gateway, Toshiba, Compaq, HP, come to mind. So IT professionals needed a different skill set and Byte was no longer as relevant.

Definitely present in larger newsagents in Ireland. Not sure how many people read it though, it was very US-centric. Also my memory is that it was like all US computer magazines - 75% ads (or so it seemed) so personally I never bothered with it.

We didn't have any indigenous equivalents in Ireland (or native computer magazines at all really) as the UK magazines served us very well. I would say PC Pro and Personal Computer World would have been the UK equivalents.

I can confirm readily available in at least London UK, hence best guess is probably much of UK or other major cities.

It was readily available in larger towns in Sweden as well. Not localized at all - as note by others the US ads where there.

It was readily available in Canada when I read it in the late 80s - early 90s. I don't recall any content being localised for Canada, but it did have the usual 2 prices printed on the cover -- USD and CAD.

(This probably could have been a comment, but I don't yet have enough rep.)

It was common at newsagents in Sweden (more exactly those which had a policy of carrying German and English language journals.)

My local municipal library had a running subscription, so it was possible to read the US version for free in multiple city libraries.

Not the answer you're looking for? Browse other questions tagged magazine or ask your own question.

8
Where can I read the article from Personal Computer World, Nov 1978, which introduced the 8th Rugg/Feldman test program?
14
How is it possible that they used to type "Mb" when they meant "MB" in printed computer magazines in the 1990s?
50
What is the origin of this bizarre advert of people wearing swimsuits in a room with computer hardware?
16
Which was the first magazine presented in electronic form, on a data medium, to be read on a computer?
10
Any source for German Magazine "Computern mit Kindern", single issue, late 1984?