Were any form-based applications designed for more than 80 columns?

The traditional standard display for business computers was 80 column text (with either 24 or 25 rows).

Horizontal applications like spreadsheets and word processors, don't need to be designed for a particular display; they can just use however many columns you happen to have at run time.

But vertical, or line of business, applications tend to be form-based; they use fixed-layout forms for things like entering orders. These need to be designed for a screen with a certain number of columns. Unsurprisingly, then, these were usually designed for 80 columns.

In the days of text displays (i.e. when the hardware showed not an arbitrary bitmap, but a fixed grid of character cells), the usual standard was 80 columns, but some machines could do more. The Amstrad PCW, for example, showed 90 columns. The DEC VT320 had an optional 132-column mode, albeit not very readable on a 14-inch screen. One could imagine designing forms on DEC hardware to use 132 columns, though readability would seem to suggest sticking to 80.

Were any form-based applications on any system, ever designed for more than 80 columns? (Considering only systems that displayed text in a fixed number of columns, not modern graphical interfaces, which make different tradeoffs.)

Somehow this answer is self answering, isn't it?

If there are systems offering more than 80 columns, why should any developer writing for this platform ignore them? Just take a look at PCW applications, starting with this very basic manager form: 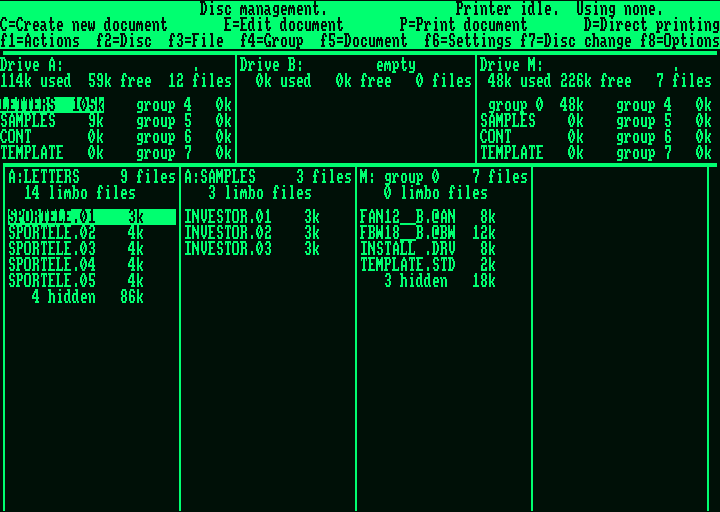 Any usage is always about context - here especially the context an application is used or targeted at. If one targets the C64, he wouldn't use anything past 40 columns, despite 80 being most common otherwise, or 80 column extensions being available. The same reasoning goes for applications intended for systems that offer more columns per line by default.

That a huge number of application were created for a context of 80 column system does thus only prove that there were 80 column systems, not that no other existed or that these were not supported.

In fact, when it comes to business application, like the tenor of the question seems to be, then these were (in the good old days) usually a bundle of hard and software. Companies didn't buy a bunch of standard PCs (wich standard?) and went for some compatible software, but bought a business solution as a package. Often rebadged hardware, if not proprietary to start with.

In fact, the PCW is a great example here, as many were sold for small businesses with custom packages, made especially for this 90 column screen. Often using LocoFile and/or Mallard BASIC, both operating by default in 90 columns. Same goes got Masterfile 8000 and other PCW applications.

Heck, it worked even the other way around: terminals with more than 80 columns were created on purpose for certain applications, for example Siemens 8162 for newspaper editing.

Not the answer you're looking for? Browse other questions tagged history software display text application-program or ask your own question.

5
What were the characteristics of the Siemens 8160 and 9750 terminals?

26
Did any Amiga 500 games or programs (apart from paint programs) use more than 32 colours?
9
Spectrum clones 512x192 mode usable text resolution
12
Did any RISC CPU ever take more than one clock cycle per instruction?
15
Besides the VIC-20 did any other micros have fewer than 32 columns available for text mode?
21
When IPv6 was designed were there any specific considerations for other planets?
5
Were any decimal-based computers capable of handling text?
5
Were there any filesystems support tag based key-value pairs before the 90s?
5
Performance characteristics of the DEC Type 30 graphical display
6
Were there any square monitors other than PLATO?