What was the use case for the 96-column punch cards introduced with the IBM System/3?

Not sure when they were introduced but it was before optical scanning (barcodes) was possible / affordable, maybe even before magnetic stripe scanning too (IDK). It turned out this was the last gasp of punched cards.

At the time they were introduced (1969 according to wikipedia) 80col Hollerith cards had already been in use for 40 years as standard equipment - the cards and machinery that used them was ubiquitous - widely available new and used - software was organized around it, etc. etc. Why a new card system instead of, say, engineering more compact 80-column equipment for the smaller business buying the System/3s? Life span turned out to be only a few years; IBM Research didn't predict floppys were coming soon? (Which that wikipedia article linked above suggests replaced them within 5 years of their introduction.)

I have this vague memory - possibly imagined - that I saw cardboard tags hanging from clothes in a department store - these tags had a perforation line through them and if you tore the card at the perforation what you had was one of these 96 column cards. So you could use it for inventory or something. You couldn't do that with a standard Hollerith 80 column card - much too large. But, as I say, that "memory" could be totally fabricated.

It was introduced for the same reason 2.88 MB 3.25" floppy diskettes and drives were introduced. Remember ED and how it took over from HD the way HD did from DD? No, you don't, because it never did take over, or even become popular. But they were an easily available standard (not proprietary) that continued a twenty year history of developing denser and higher capacity floppy formats.

The 96-column card was also a large (and long overdue) increase in density for that system. (Boxes of cards were heavy!) There are a couple of reasons you see things like this shortly before a major switch in technology that replaces them.

The first is that even if you well understand [the innovator's dilemma][i], including the old and new audiences initially on either side of a technology change, and decide you're going to quit on an old technology when the new one is ready, it's very hard to tell in advance when that new technology will take over the market. The development and deployment cycle for a major incremental improvement on existing hardware that needs new consumables (e.g., floppy diskettes) involves co-ordination between many different companies and can easily be a two or three year process. Small things, and particularly non-technical things that are hard to predict (such as customers' emotional attachment to the old product or emotional reaction to the new) can easily shift that schedule by a couple of years. Apple's 1998 choice to make the iMac USB-only, which probably shifted USB's timeline forward a couple of years, was not only unpredictable in itself, but also probably similarly shifted flash storage as a floppy drive replacement (a second order effect for which it is even less easy to predict a timeline).

If you're proposing dropping a current mainstream technology that's popular and working well based on a prediction of when it will become a legacy technology, or even if you're just proposing halting further development (putting you out of that market at the next evolution of that technology), your prediction needs to be supported by pretty strong evidence. If it's not, it often makes more business sense to keep things going until you can more clearly see when that technology will become unprofitable, rather than take a risk of missing profits if it doesn't decline as fast as someone thinks it will.

The second is simply momentum. There are usually groups dedicated to improving existing technologies, and they're well established and producing predictable results. They also have customers who like those technologies, the majority of whom are not ready to switch until a potential replacement has proven itself in the market. (How do you tell when it's "proven itself"? That's another prediction problem.) Dropping these is difficult because you're asking a lot of people to step away from something they're heavily invested in and for which they have good arguments that it's working well. Many people will try to protect their current position in an organisation until it's really clear that it's not sustainable.

I have little doubt that this second reason was a major factor in 96-column punched cards. How much the first could have even been thought about is an open question: development started some three decades before The Innovator's Dilemma was published, and even so it's not entirely clear whether floppy diskettes are entirely a replacement for cards. Floppies have clear disadvantages in some situations, such as requiring a rekeying station for changes that can be done just by swapping cards in and out with a paper deck. (I'm sure that changing out the JCL cards at the front of the deck was a common occurrence, and pre-punched command sets were a common thing in the keypunch and submission areas of systems that used cards heavily.)

The way all these things combine, I would be more surprised by the absence than the presence of a "last gasp" improvement in an older technology just before a replacement for it appears.

What was the use case for the 96-column punch cards introduced with the IBM System/3?

About the same as for introduction of 5.25 or later 3.5 inch floppies: same capacity in a smaller form factor. In fact, the 96 column card was kind of the 3.5 of punch cards, just right to be put in a shirt pocket.

To give more storage in smaller space to improve handling of small to medium data sets. A 96 column card was only about 1/3rd the size of a standard card but could hold 20% more information, so that's almost quadrupling data density.

Of course, when just looking at the increased storage capacity, one could as well have used the existing format and tripple data density. But to use this software would have to know that cards now three times as large. But 80 columns was deeply engraved into the very foundation o all databases at the time. Changing all of that would have been an incredible task.

Making the card smaller on the other hand would bring the same improvement while being mostly compatible on the software side. A 96 column card can quite well be used by software expecting (and producing) 80 column cards. It would simply not see the additional 16 columns while on output they stay empty.

No changes handling required but an immediate save of 66% storage space.

and at that time?

Time is maybe the most important item here. The System 3 was developed in the late 1960s - introduced 1969 - right at a time when punch cards were still a thing but started to become more and more obsolete due tapes and disks.

It was almost as if Volkswagen would today introduce a whole new (*1) gas engine design. It would be awesome tech and great engineering, but vanish faster than its predecessors as we're moving toward electric propulsion.

In fact, essentially the same happened with the 96 column card. it got introduced in 1969 with the IBM 5424 Multifunction Card Unit (MFCU) and replaced starting in 1973 by the IBM 3741 floppy units. First as add-ons to existing machines, later the MFCU was no longer offered, so 3740 floppies became the way to handle small data sets (*2).

As history goes, the 80 column card survived a bit longer due its massive instalment base.

The 96 column card (like the system /3) didn't appear out of nowhere but is based on the System 3000 design developed in Böblingen in the early 1960s. The System 3000 was intended as a very low end machine. It introduced an 240 column punch card half the size of the standard one, to be seen on the left side of this picture: 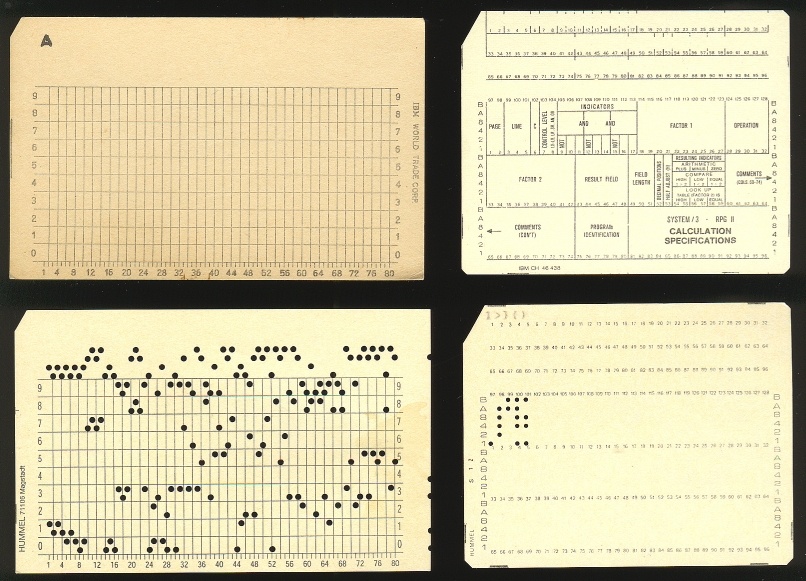 This half size 240 column card shows already all features of the later 96 column card (shown above on the right side):

The system 3000 suffered from problems with its card devices (and possibly a certain 'not invented here' syndrome in Rochester).

While the System 3000 was cancelled in 1964 (?), the idea of a smaller, more capable punch card lived on. In fact, the System /3's 96 column card follows the System 3000'S card in all but mechanical definition. While being smaller, it had only 32 physical columns, spaced wider than the System 3000 card but at the same time with smaller holes. It's safe that this was to get around the mechanical problems that killed the System 3000.

The restriction to 96 characters on the other hand added a high compatibility layer with classic cards, as all handling coudl be kept fully compatible with 80 column cards.

How to encode 3 characters in 4 groups of 6 holes 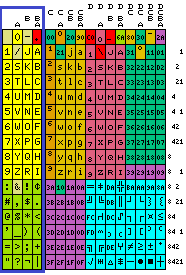 This seems to be a quite odd scheme until we consider that punch cards had as well writing along the top row(s). The first 64 character encoding (framed in blue) will have only no holes in C or D, thus leave the top area unharmed. By arranging all basic letters (only upper case), numbers and symbols within these 64 codes chances are high that most cards will have no hole within the upper fourth of the card. Perfect for undisturbed labeling. Isn't it?

*2 - Noteworthy again that the floppy did only play a small role here as it eliminated the use case for small data sets. Even before floppies disks and tapes did successfully start to replace punch cards for large data sets. so to floppy just killed the last niche for punch cards, and even an improved one couldn't hold much against that.

Not the answer you're looking for? Browse other questions tagged ibm punched-cards or ask your own question.

3
In IBM SCRIPT/VS, what does DSM stand for in macros DSMFIG, DSMLIST
3
What do the numbers on the punch cards mean?
4
What was the first company to sell an IBM compatible punchcard reader?
32
What did code on punch cards do with the other six bits per column?
8
Was there a way to directly print out a deck of punch cards without involving a computer?
21
What was the most critical supporting software for COBOL on IBM mainframes?
1
Why did IBM decide to use 8 bits for EBCDIC?