Is it possible to play Famicom games on the NES and utilize the extra sound channels?

I've seen there are adapters to convert Japanese Famicom games to work on the NES. You may have to remove the lockout chip, I can't remember.

Anyway, many Famicom games included extra sound hardware to enhance the in-game music. However, on the NES, this extra sound cannot be heard because the NES lacks the circuitry to route the extra audio from the game cartridge to the NES audio circuitry.

My question is, was there any 3rd party adapters that would not only route the Famicom game to the NES console, but also route the extra audio signals out to perhaps an external audio port on the adapter so that we could mix the two audio signals together?

The NES cartridge connector does not have expansion sound. However, there's an expansion port on the bottom of the NES which does, although this connector was never used by any commercial games.

However, the cartridge has to be designed to play audio into EXP6, which no commercial games did, and the game has to use the expansion audio channels, which no North American commercial games did, so the mod won't add sound to any existing games. It would work with that Famicom-to-NES adapter as long as the adapter routed the audio to EXP6.

I haven't tested this, so I can't vouch for its authenticity, but one guide claims that soldering a 24k to 56k resistor between pins 3 and 9 of the NES expansion connector will "unlock" additional sound channels. 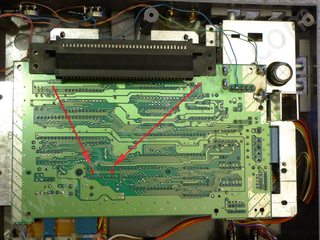 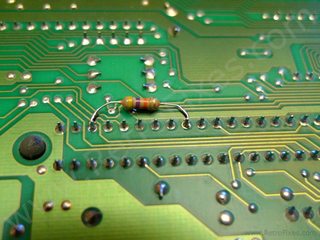 Note that this only works on the original release with mono audio out.

Not the answer you're looking for? Browse other questions tagged nintendo nes audio or ask your own question.

18
What are the differences between the Japanese Famicom and American NES?
18
How Did the 10NES lockout chip work?
7
What is the Famicom "Pulse Line" of games? How many games are part of this line?
9
How do NES/famicon games produce additional sound channels?
16
Was Family BASIC for the NES/Famicom powerful enough to create full games and applications?
8
NES/Famicom CPU address range allowable for cartridges
5
Does the NES handle unlisted processor instructions differently from the Famicom?
3
Why didn't Famicom games use the Konami SCC for expansion audio?
2
What is the reason of losing of save data in some NES games? How to prevent?
7
Did the PAL version of Super Mario Bros. on the NES really have faster music, and if so, why?