Was there any software on the IBM PC that specifically took advantage of the NEC V20?

Back in the day I remember friends upgrading their IBM PCs (and compatibles) with a NEC V20 CPU. While this was mostly to get a bit more performance out of their machines over the stock Intel chip, I know that the V20 did have some additional features in the instruction set and as well the 8080 emulation mode.

But that being said, was there any software produced back in those days that recognized a V20 (or V30) chip and took advantage of those exclusive features?

was there any software produced back in those days that recognized a V20 (or V30) chip and took advantage of those exclusive features?

Not really. I remember an Amstrad/Schneider PC1512 orientated magazine printing some listings using the added instructions. There were also one or two articles in c't magazine using the bit operations for improved graphics. But no 'major' application I know of.

As usual this all depends on the application. In theory speed improvement was up to 30% depending on instruction mix, as for example Topbench shows: 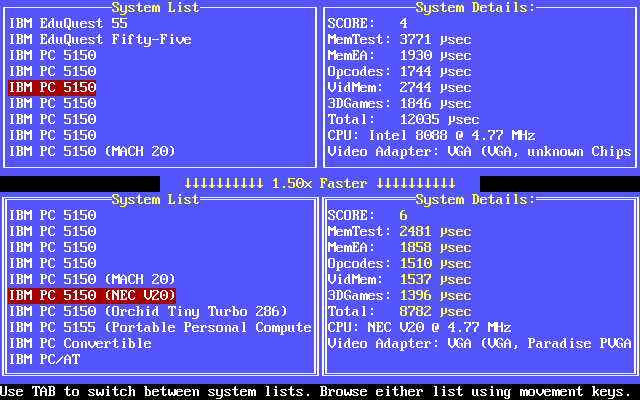 Real life gain is somewhere between 10-15%, so really only noticeable when the application was already quite slow with an 8088. Usual rule of thumb for speed up is that anything below 50-80% speed will not be noticed.

A personal anecdote - Between Christmas and Hl. Drei Könige 1988/89 I played the brand new SSI Pool of Radiance with a friend. It was playable, on his straight 5150, but not exactly fast. Plugging in a V20 at hand did bring exactly the speed bump needed to make it satisfying.

Playing it a few month later on my first 486-50 brought a contrary experience - some parts of the game were now simply way too fast, so this game was the first instance where I had to slow my nice, new, top end machine down :))

*2 - Video system may as well differ

Not the answer you're looking for? Browse other questions tagged ibm-pc nec-v20 or ask your own question.

34
What was the IBM PC cost saving for using the 8088 vs 8086?
20
What was the first C compiler for the IBM PC?
107
Was there ever any reason to wait 30 seconds to restart a c.1995 PC?
25
The almost-was Atari IBM PC
16
What is the oldest commercial MS-DOS program that can run on modern versions of Windows without third-party software?
24
Why was hardware diversification an asset for the IBM PC ecosystem?
22
Why was NEC able to wrestle PC graphics standards away from IBM?
8
Was sector size under software control on the original IBM PC floppy drive controller?
24
How was the 80186 incompatible with the IBM PC?
6
Are there any known 8086 systems that would dynamically switch between XTAL and EFI clocks on 8284 clock generator?