Why did the description of the Windows shutdown command imply power-off was manual even with ACPI available?

The description of the ‘Shut down’ option in earlier versions of Windows reads:

Ends your session and shuts down Windows so you can safely turn off power.

Why was this shown in Windows 98–XP even with ACPI hardware?

If ACPI hardware was detected, why won't it say "Ends your session, shuts down Windows, and then turns off power/your computer." as in Windows Vista and later? Let's say the ACPI hardware and drivers are enabled and working normally.

Presumably inertia, of the same kind that had MS-DOS prompt for the current date and time at boot long after RTC with state preserved across power cycles became a standard feature.

Alternatively, the designers might have decided the effort is not worth it. Switching between two different messages would necessitate creating an API that queried the appropriate drivers whether autonomous power-down can be performed. Occasionally though, the API might return a wrong answer, and in fact, in some situations it may be impossible to write; Windows 95 did not support ACPI, but it did support the older Advanced Power Management interface. The mere presence of an APM interface does not, however, mean that the computer is capable of turning itself off; it might be that the system power-off call is one of the things the particular APM implementation available omits. The only way to know for sure that APM power-off works is to actually try to perform it; and risking misleading the user to think they can walk off from the computer and it will shut down itself would be more troublesome than the opposite. It was not uncommon (and still is not) that features were scrapped just because the burden of setting them up was not worth the trouble; Raymond Chen reports that a similar fate fell upon floppy insertion detection.

Finally, ‘turning off power’ need not actually refer to just putting the motherboard and devices connected to it into standby mode, but to disconnecting the computer from the electrical grid entirely, such as when flipping the switch on a power strip. When interpreted that way, the message wasn’t actually misleading at all.

For what it’s worth, the phrasing used in the online help system was more ambiguous, even as early as Windows 95: 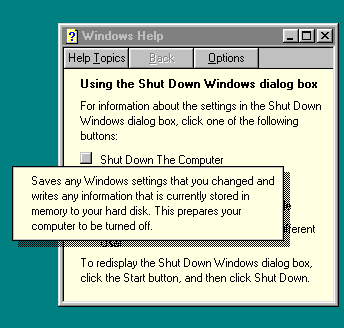 The suggestion that power-off is a separate step that demands action on the user’s part is less strong here. Arguably somewhat remarkable, given that back in the days of that version, autonomous power-off was much less widely supported.

Some language editions also used a more ambiguous phrasing, if only inadvertently: my native-language edition of Windows Millennium uses the equivalent of, roughly:

Ends the session and shuts down the Windows system, which allows power to be safely turned off.

Although the primary reason for this is presumably to avoid having the computer address the user as ‘you’, which could be construed as awkward if not rude, especially in languages with T–V distinction.

Not the answer you're looking for? Browse other questions tagged power windows or ask your own question.

132
It's now safe to turn off your computer
26
Why does DOS ask for the current date and time upon booting?

53
Why did Commodore fill their power supplies with epoxy?
28
Why did computers use a power supply with a socket?
33
Why did Windows 95 crash the whole system but newer Windows only crashed programs?
10
Why did the C64 use a separate "CAN" +5 V power supply for some chips?
23
Why did the original design of COM on Windows rely on the Registry?
15
Why did the IBM PC have an internal power supply?