Is the MANIAC in the movie 'The Magnetic Monster' the real MANIAC computer?

I just watched the movie The Magnetic Monster, which is a 1953 science-fiction thriller. The main premise is hokum, but there's an amount of reasonable-seeming background "science" around.

The heroes, from the Office of Scientific Investigation (apparently not the OSI that would go on to design a network protocol suite thirty-some years later :-)) do some calculating with an electronic brain known as "the MANIAC". There are various shots of various pieces of equipment, including keypunches, 5-hole paper tape readers, various switch panels, and so on. And a pre-computer card sorter which is supposedly part of the MANIAC, but never mind that.

There was a 1952 computer called MANIAC at Los Alamos, of design similar to the IAS machine. And there's some thematic tie-in to the movie, which has a "radiation" problem as well as the magnetism of the title.

So here's my question: are any of those shots actually the Los Alamos MANIAC?

Key scenes have the boffins at the operating console of the MANIAC, with the usual "cheaper in quantity" number of lights and switches. Are there any similar pictures of the real MANIAC.

I believe one character says the MANIAC uses a "new form of cathode ray tube" for storage, which seems about right for the time.

(The movie is entertaining enough, if you like the genre; it's free viewing with Amazon Prime in the USA)

Having taken a look at the film it does not appear that the "MANIAC" depicted is the same as the real MANIAC I. The "MANIAC" computer appears at about 18 minutes into the film.

What is actually shown in the film are two IBM punched card processing machines (models 101 and 402) along with the Standards Western Automatic Computer1 at the NBS in Los Angeles. Both the SWAC and the real MANIAC I used Williams tubes for storage.

Source: All film images are from The Magnetic Monster via Amazon. Used under Fair Use.

Photos of the real MANIAC I:

The Los Alamos MANIAC I during construction ([right] photograph) and in 1952 after its completion. The banks of vacuum tubes in the middle four panels make up the arithmetic processor; the side panels and the back contain the controls; the row of switches on the far left is the user's console; the boxes on top, each containing a 2-inch electrostatic cathode-ray storage tube, constitute the memory. Neon lights attached to each tube allowed the binary digits contained in the registers to be seen directly, and, as a result, the contents of a register could be changed by shorting one side of a vacuum-tube flip/top with clip leads. — Ibid

All MANIAC I images believed to be Public Domain. 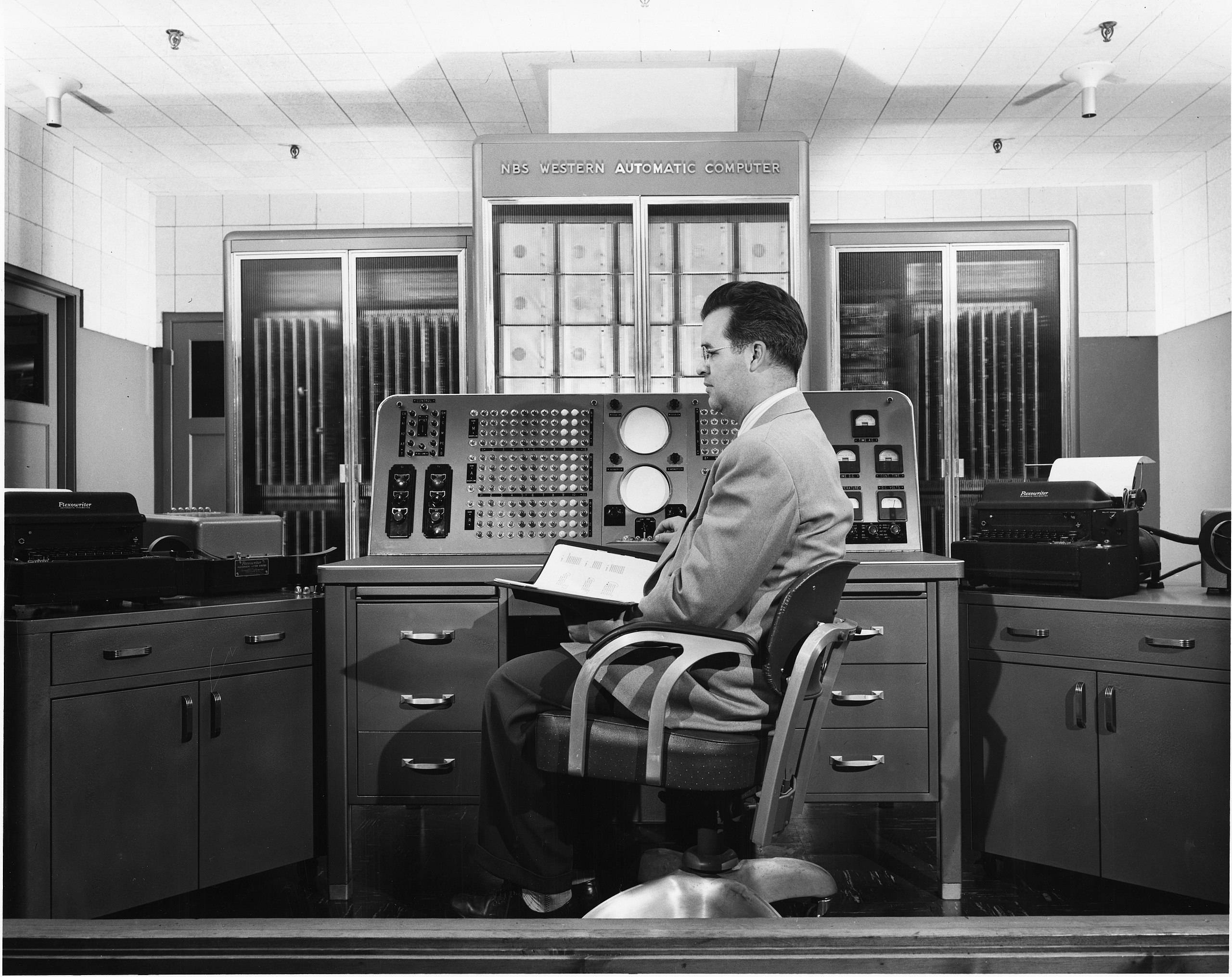 The computer is at the back wall with the Williams tubes in the center cabinet flanked by the logic boards in the cabinets to either side. The console is in the foreground along with the input (left) and output (right) Flexowriters. The power supply is MIA.

FWIW, the spectrometer shown in the scene prior to the "MANIAC" does appear authentic. I'd presume the footage of it was also shot at the NBS (now NIST) in Los Angeles.

12
Is this machine the EDVAC, MANIAC, or IAS?
34
1913 mystery computer below Grand Central Station
40
Were any of the books mentioned in this scene from the movie Hackers real?
3
Is this real Commodore C386SX-LT
26
What's the terminal/home computer used as a prop in the computer school in Superman 3?
18
Is the Coleco computer from The Simpsons based on a real computer?
2
Identify computer seen in Wikipedia
13
What is the name of this computer? (Bell Laboratories, 1954)
41
What's this computer in the 1988 movie "Vampire's Kiss"?
12
Unknown device in MANIAC I machine room