the computer can be damaged. We haven't tested this yet (if this works, it means we would damage a computer) but we hope to put it to the test in the future. At one time we told you that it was impossible to break a computer by issuing commands from the keyboard. Well, this would be the exception that proves the rule. 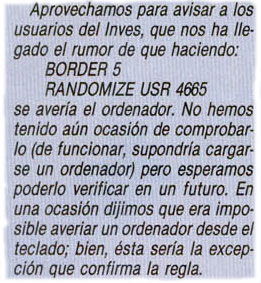 32
Was there a retro computer susceptible of being damaged only by issuing instructions at it?

13
Can polarity inversion damage a ZX Spectrum?
23
ZX Spectrum tokenisation
6
Can a Harlequin ZX Spectrum clone be modifed to run CP/M?
8
How can I input a string in ZX Spectrum BASIC using INPUT and not show the quotation marks?
5
Does Sinclair Spectrum BASIC have a maximum length for one line?
3
Where can this "boot.B" file be coming from on this Spectrum TR-DOS disk image?
9
Did any ZX Spectrum clones use a 16 bit datapath between memory and video generation?
8
Why was Carrier Command for the ZX Spectrum superior to the C64 version?
4
Why does this ZX Spectrum clone have an extra 2K PROM on the Farbplatine?
4
How do I use the extra commands in the Spanish version of the 128k Spectrum ROM?