Was there a retro computer susceptible of being damaged only by issuing instructions at it?

This question... Can a USR command damage a ZX Spectrum? ... has leaded me to wonder if there was once a microcomputer that could actually be damaged by software.

Is there a case that a microcomputer, using its default shipped hardware configuration (i.e. no added interfaces and the like), could be permanently damaged (requiring service to return to working order) just by writting a program and letting it execute it?

I'm not talking about damage to elements connected to it (such as the monitor, a disk drive or a printer), but to the computer itself.

This was, and often still is, a deliberate design feature of safety critical computers.

The Harmon VHLC, which is a 80186-based solid state interlocking used for railway signalling has been around since the late 1980s. Its two CPUs cross-check each other every 39ms to make sure that they are at the same point in the program and agree on the value of certain key registers. If one processor decides that the other processor is misbehaving, it can write to a memory mapped I/O address that switches 110V into the 5V input. This is a deliberate ploy to kill the misbehaving processor so that the system fails safe.

This technique of multiple processors cross-checking each other is common practice if designing to Safety Integrity Level 4, as defined by CENELEC.

My teacher asked me the question back when I was in college. My answer was to write in assembly a simple command that asked the hard drive arm to read well beyond what it was allowed. This caused the hardware to burn out making the hard drive inoperable. Hard drives now have a safety precaution built in to avoid this scenario.

It's not particularly "retro", but many x86 computers in the early Pentium IV era could be permanently damaged in a matter of weeks by setting the operating voltage and frequency too high. This would cause the CPU to run hot and literally cook itself.

Earlier computers used jumpers rather than software controls for these settings, and later computers had better safeguards and thermal management.

Certain models of the Commodore PET had a Killer Poke.

If you poked a particular value to a particular location, then the video circuit would damage the integrated CRT.

Some retro computers such as the ZX Spectrum and Amstrad CPC did not fully decode I/O addresses. Instead they used a single address line to select each I/O chip, so it was possible (by using an invalid I/O address) to enable two or more chips at the same time. If the two chips are putting different data on the bus then they are shorting each other out, which could damage their bus drivers. 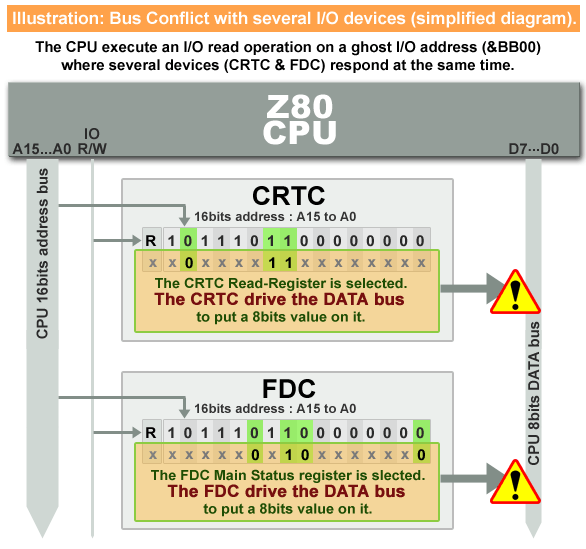 You could kill the BBC Micro's cassette relay (and those of many other computers with cassette relays) by writing code to toggle them in a tight loop.

As I explained in my answer to Can removing a cartridge from an NES (or any other cartridge-based game system) damage the hardware or software?, the NES can be damaged by software.

This way, the images from two PPUs can be layered. The slave PPU draws one image, and the master draws another image on top of that and outputs the combined images.*

The NES didn't use that feature, but the hardware still exists in the PPU. If the PPU is set to slave mode, it will attempt to output the background palette index to the EXT pins. If it outputs a 1 to any of these pins, it will cause a short from Vcc, through the PPU, and to ground (because the EXT pins are grounded), possibly damaging the PPU.

*: The image generated by the slave PPU can only use colors from the background palette of the main PPU because there are only 4 EXT pins, not 5.

Damaging the computer itself is hard to imagine, but damaging peripherals is much easier. Back in the early days of Linux (94-95), configuring the X11 server (that put graphics on the screen) required you to define video modes by specifying them in terms of clock rates listed in a text based configuration file. Unfortunately, this was not at all intuitive, and you ran the risk of damaging at least some monitors that didn't have adequate internal safeguards. This resulted in the XFree86 HOWTO having this friendly bit of language as a disclaimer (Emphasis mine):

You shouldn't use monitor timing values or ModeLine values for monitors other than the model that you own. If you attempt to drive the monitor at a frequency for which it was not designed, you can damage or even destroy it.

Starting up X11 for the first time was more than a bit nerve wracking.

(Edit: One additional bit of damage you could do wasn't hardware... but you could make the argument that it's worse. When Microsoft first introduced write buffering to the smartdrv disk cache, it would sometimes defer writes for longer than it probably should have... including to file location metadata. Combine this with the lack of memory protection, and it should not be a surprise that at least one errant memory write from software I was developing crashed the system before the cache was flushed and corrupted virtually the entire contents of the disk.)

If it's not too much of a stretch, to add to the "over-exercising the drive" examples, per one of the developers of Crash Bandicoot for the original Playstation:

Kelly is a smart guy, and a good game critic, but he had a lot more to worry about than just gameplay. For example, whether Crash was physically good for the hardware!

Andy had given Kelly a rough idea of how we were getting so much detail through the system: spooling. Kelly asked Andy if he understood correctly that any move forward or backward in a level entailed loading in new data, a CD “hit.” Andy proudly stated that indeed it did. Kelly asked how many of these CD hits Andy thought a gamer that finished Crash would have. Andy did some thinking and off the top of his head said “Roughly 120,000.” Kelly became very silent for a moment and then quietly mumbled “the PlayStation CD drive is ‘rated’ for 70,000.”

Kelly thought some more and said “let’s not mention that to anyone” and went back to get Sony on board with Crash.

So I think it doesn't hit the definition of a retro computer, but on the Playstation not only could a sequence of instructions damage the hardware, but one of the best-selling pieces of software was knowingly likely to do so.

Maybe what you're looking for is the semi-mythological halt-and-catch-fire instruction?

Several of the Motorola processors had an instruction or two that put the CPU itself into a HALT state, but cycled the address lines from 0 to 65535 endlessly. This was great for testing, since you could check for address decode errors and such quite easily.

The only way out was hard reset or cycling power.

These were jokingly called "HCF" by some engineers, but, of course, it would take a poorly designed bit of hardware to actually be damaged permanently by it.

has a little bit more on the subject of invalid op codes putting the CPU into a state requiring power cycling or hard reset. It mentions one possible (apocryphal) scenario in the pre-microprocessor world, of a magnetic core design that might burn the control lines.

Thinking of the sort of things a hobbiest might build, one could imagine something like improperly designed dynamic RAM circuits or even data buffers with too much loading that could be burned out by a CPU's HALT state. But I think hobby projects don't count for this question.

A straight, simple CPU and memory arrangement of a (sufficiently simple) computer is made to start from a reproducible state after RESET into the next deterministic state.

Permanent damage requires permanent storage or the ability to change something permanently in a computer through the ability to control external circuitry - and early home computers didn't have such luxury items. Even if you might (theoretically) be able to drive the same bus line from two devices to a conflicting state (which would be the closest to being able to damage anything), this is not very probable to really cause permanent damage to TTL and early CMOS chips - Early electronics can stand such a strain for quite some time, most even forever.

When more modern devices started to have EEPROM or Flash memory that could be permanently changed to store configuration data or have upgradable firmware, it became easier to permanently brick them. But I would deliberately exclude such devices here.

49
Can a PET 2001 be physically damaged from BASIC?
37
Can a USR command damage a ZX Spectrum?
16
Can removing a cartridge from an NES (or any other cartridge-based game system) damage the hardware or software?