How did a punchcard-based test-taking system work?

A punchcard (in 3 fragments) has been found in a copy of Computer Programming: A Mixed Language Approach by Marvin L. Stein and William D. Munro (1965).

If my guess is right, a test-taker would write in her name, etc. then pencil in one of A-E answers to questions 1 up to 108, and then? Here we can see that the test number or the course number is already punched. What was the process of entering these punchcards in a computer? Were all pencil marks converted to punches first, or were there mixed punchcard/optical readers?

Does anyone remember using such punchcards to take tests?

The marks would be converted to punches in a machine like an IBM 519 Document-Originating Machine (1946) or later. The now-punched cards would have been read in any card reader or unit record machine. The pre-punched candidate number would have been linked to the handwritten candidate name by a manual operator.

Such “mark sense” cards had many applications, including prison classification (link is to 1957 article, with good illustrations of the card template used). IBM made special pencils ("IBM Electrographic") for marking cards and test sheets.

The pencil marks would have been punched into the card.

Back in the 1960s-70s most computer suites had teams of people who would transcribe written notes onto punched cards. My mother worked part-time in one for many years. These places were the typing pools of their day. Data would arrive either on paper or on part-punched cards and the operators would copy-type the data onto cards. 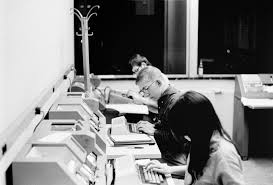 So, in your case, it is most likely that the cards would have gone through a pool like this to have the pencil marks transcribed into the card.
It was quite possible to see the card you were punching so that you could read the marks, as shown below: 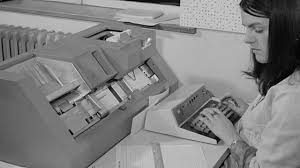 ... and do I remember using punched cards? Yes, when first learning the art.

Most likely, these cards would have been read optically, though there seem to be some pre-punched holes in the "instructor" field. Those holes might not be actual data (i.e. a code for the instructor's name) but just to indicate which side of the card was being scanned, since it seems to be a double-sided card.

IBM produced an optical-reader "test scoring machine" in 1939, long before the computer era. See http://www-03.ibm.com/ibm/history/exhibits/specialprod1/specialprod1_9.html and the following page.

If the reader converted the optical data to punched holes, there is no problem with the volume of data, because in "column binary" mode each one of the 80x12=960 hole positions on a card can represent a single bit of data.

We used to use similar optical-input cards for project time recording, at a company I worked for in the 1970s. The marking was done using special pencils with "lead" that felt slightly greasy, made very dark black marks, and was not erasable (which would obviously be a useful feature to avoid cheating on tests!)

It might be due to the fact that I went to a public school that had a penchant for hiring terrible educators, but they had a clever way to avoid paying for actual scantron punch/marker card systems with this method:

This is an illustration I drew up real quick. The red card above would be the student's card that they would complete. The top card (Green) would be the instructors card. In this, they would use a hole-punch to create a "mask." This allowed them to rapidly grade cards simply by holding them over the cards turned in by students (protip: coloring in two or three as a student increases your odds!)

In my example, answer #3 and #9 would be wrong, as they are not shaded by the pencil.

Not the answer you're looking for? Browse other questions tagged history punched-cards or ask your own question.

12
How did the early UPC barcode readers work?
4
How many units did the Victor 9000 sell?
28
How did the IEC decide to create kibibytes?
4
How did IBM's “Mag Card” drive and magnetic media work?
17
How did SABRE work interactively without screens?
18
What was the earliest system to explicitly support threading based on shared memory?