Will this Acculite laptop boot without HDD?

First I'd like to ask: Does anybody even know of this laptop? I was surprised to find 0 information about it online. I've was asked to see if I could get this thing to boot, but it was in rough shape. The battery had exploded and the HDD seems to be totally dead.

At this point I can get it to beep twice, but due to the lack of information I'm not really sure what the code means. Maybe it's because the hard drive is missing? I do have a bootable floppy in the drive and the floppy briefly reads it during the POST it seems. If it's any help the processor is an AM386. 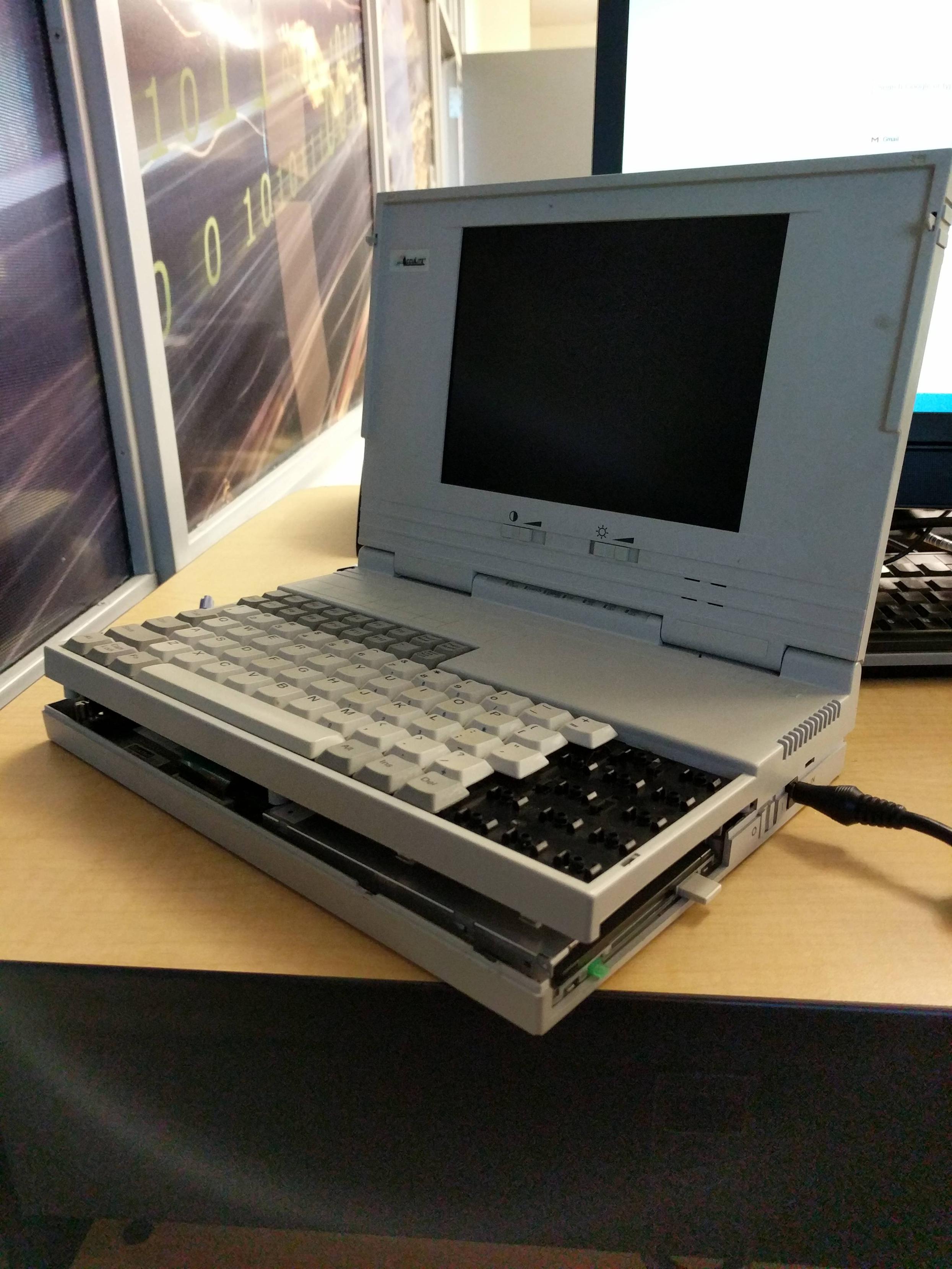 AFAIK, BIOS has always allowed booting from floppy. I can't imagine why any manufacturer would override that possibility. IIRC, the default boot order in the 386 era was A, B, and then C. Some BIOSs had settings that let you override that, and boot from C immediately without annoying floppy drive noise as it (they) tried to access a floppy. The reason for the default was for debugging. You might have good reason to not access the HDD first.

The point to all that is that there is apparently a problem with the floppy as well. Whether that is the floppy itself or the drive mechanism, I don't know. Do you know your bootable floppy is correct for that machine? For example, if the floppy were 720k double-sided and the mechanism only reads 360k single-sided, it may not be able to hande it. (Maybe it could, not sure. The point is there could be a mismatch, double-density vs single-density for example.)

The 2 beep post is likely the issue, what it means will depend on whose bios it has, pheonix and ami were the popular ones. You should find it on a chip.

Booting from floppy was always available if a floppy Drive was attached. You'll need a Dos 622 boot floppy at a minimum. A 386 era machine will support 1.44 floppies. If the system isn't completing POST you wont get that far.

Also based on the picture you do not have the brightness and contrast settings in the proper locations to see the screen. The right slider needs to be full right for full brightness. The contrast slider on the left will want to be between 25% 75% as a starting point, start with 60%. This era system had a non-Active LCD. It might be green, brown or white.

Not the answer you're looking for? Browse other questions tagged hardware repair or ask your own question.

4
Clonezilla SCSI HDD cloning problem
4
Zenith SupersPort 286e doesn't boot at all
4
Installing hdd on PhoenixBIOS A486 on Gateway 2000 4DX-33
8
Used PS1 "slim" (PSone) freezes on boot
10
Will careful restoration of a retrocomputer's paint job enhance its value?
39
When did computers stop checking memory on boot?
3
Atari ST series - bombs on boot
3
Where can I find a 26-pin flex flat cable for the floppy drive in a Toshiba T19x0 laptop?
1
Commodore C386SX-LT, what is causing this hissing sound
6
Is this SpeedDOS chip mounted right in my C64?