How did anti-Y2K-bug boards work?

During the Y2K bug hype, I remember seeing a store announcing some kind of board that one would connect to the motherboard of a PC and the problem would be fixed. Were these devices legit and, if so, how did they work?

From a CNN article I found about one such card:

The Evergreen [Year 2000 Upgrade] card reprograms any PC's BIOS to make the proper translation. It also provides virus protection plus backup and restore functions for the programmable CMOS chip on which the BIOS resides. Because the card fixes hardware Y2K problems at the BIOS level only, the company recommends contacting software vendors separately for software fixes.

Based on this description, it appears those were simply ISA cards carrying an option ROM that patched the BIOS interrupt call that reads off the system date from the RTC (and added some unrelated extra functionality as well, because of course they did). As such, it seems those cards were actually functional, if pretty limited in scope, since they fixed only one aspect of the problem: they fixed programs that (directly or not) relied on the BIOS to obtain the current date. Installing such a card could not possibly fix programs storing two-digit years in internal data structures or on-disk file formats.

Here’s a photo of another such card, the Micro 2000 Centurion: 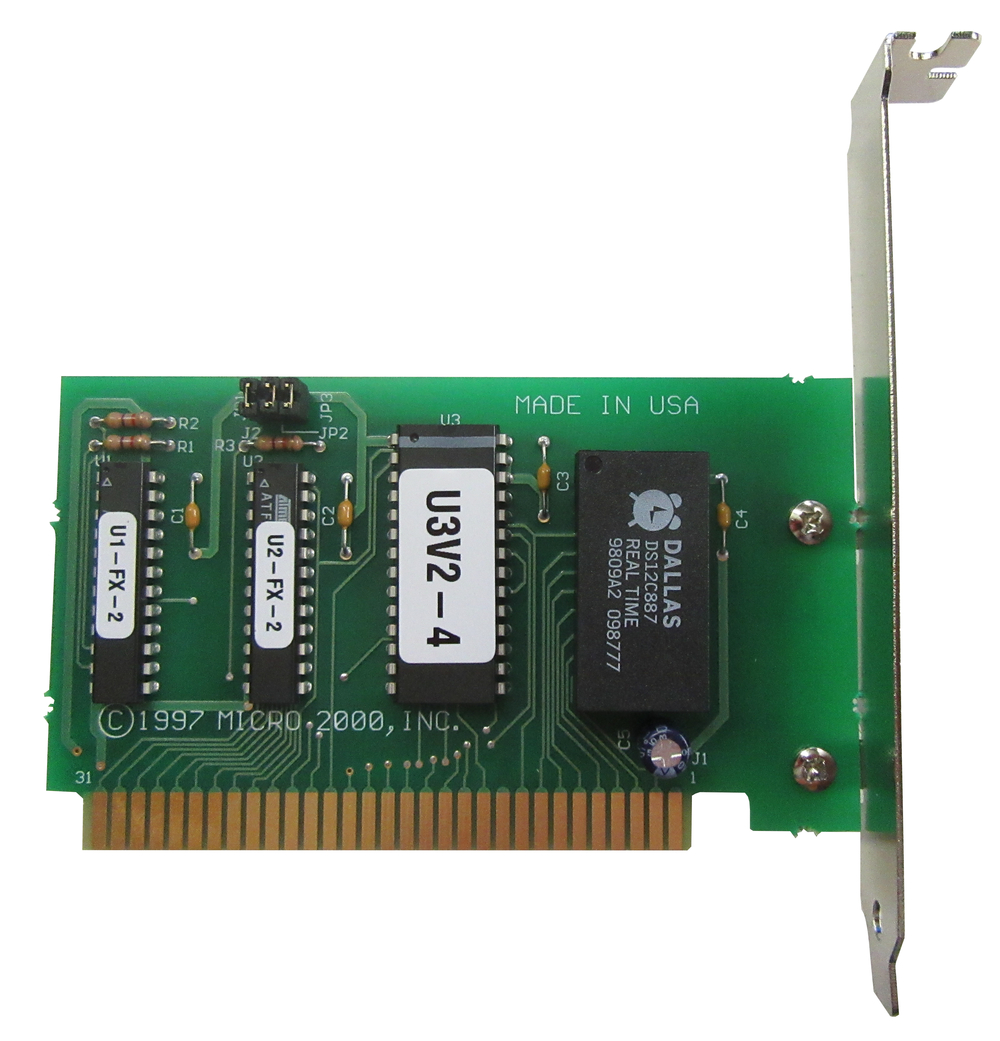 It’s not a complex device. On the right is an RTC chip. The other ‘big’ chip is likely a ROM, with what looks like a pinout compatible with TMM23256P. The two ‘narrow’ chips look like PLDs from the same series as ATF22LV10C (guessing by the part of the label that isn’t covered by the sticker), which I assume mediate between the ISA bus and the two ‘big’ chips. Any other such card I can find is similarly built: this Millennium BIOS Board, this Year 2000 BIOS Update Card from ‘Digital Research’ (probably unrelated to Gary Kildall), or this Zykon Millenniurm [sic] Pass YK2000 [sic] (this one may be an actual counterfeit, judging by the typos). Just an option ROM, a couple of chips to connect it to the 8-bit ISA bus and some jumpers or DIP switches to configure it, with something extra occasionally thrown in.

As the RBIL entry for the BIOS call notes, such a fix could equally well be applied with a TSR program, and some operating systems contained built-in mitigations that rendered the cards redundant; yet other OSes would bypass the BIOS entirely when maintaining their system clock, also making the cards unnecessary. However, those systems do not include MS-DOS (and by extension Windows 9x), which relies on BIOS services to read the RTC and includes no mitigations, so the cards were not entirely useless after all. Still, the critique in the CNN article (‘an overpriced, labor-intensive alternative to software fixes’) is quite fair.

Not the answer you're looking for? Browse other questions tagged bugs rtc identify-this-card or ask your own question.

23
Was memory corruption a common problem in large programs written in assembly language?
7
Why do sprites lag behind a scrolling map in first-generation Pokémon games?
7
Was there a bug in Wirth's original Pascal compiler?
24
How did the C64 lockup bug and its workarounds work?