Which plotter used these commands?

I've found a BESM-6 binary of a Pascal program which plots pretty pseudo-random pictures, like this 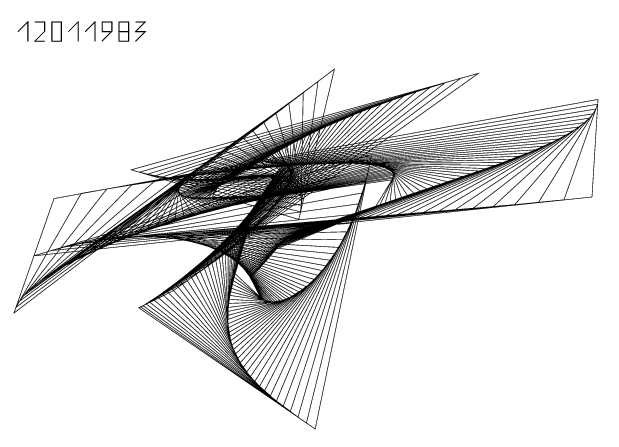 A date is given as the seed for the RNG, in a "horoscope"-like fashion.

After decompiling, it became clear that the commands to the plotter are 6 bit wide and are, in octal:

I've produced the picture by replacing the pen movement routine with

and sending the result to GhostScript.

My question is, what plotter was accepting those commands? One likely target would be a Calcomp, probably Calcomp 565 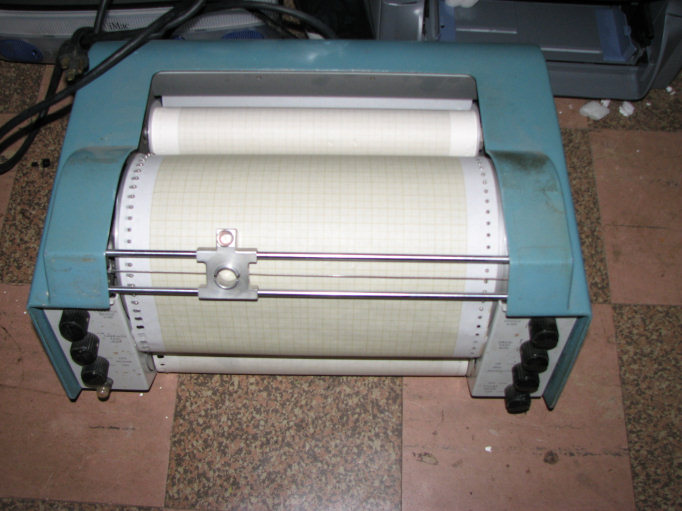 but it could be another Calcomp model, or a Benson (those two brands were known to have been used with the BESM-6).

(The date used in the picture is the build date of the program which appears in the binary.)

Update: I've found that it was Calcomp 763 or 765 and a reference page, but I could not find an English-language reference manual for those devices.

There is at least some indication that these are Calcomp commands. The Calcomp Software Reference Manual is available at bitsavers.org and covers the 'Direct Commands' sent to the device. On page 5.24 (page 130 in the linked pdf), it shows: 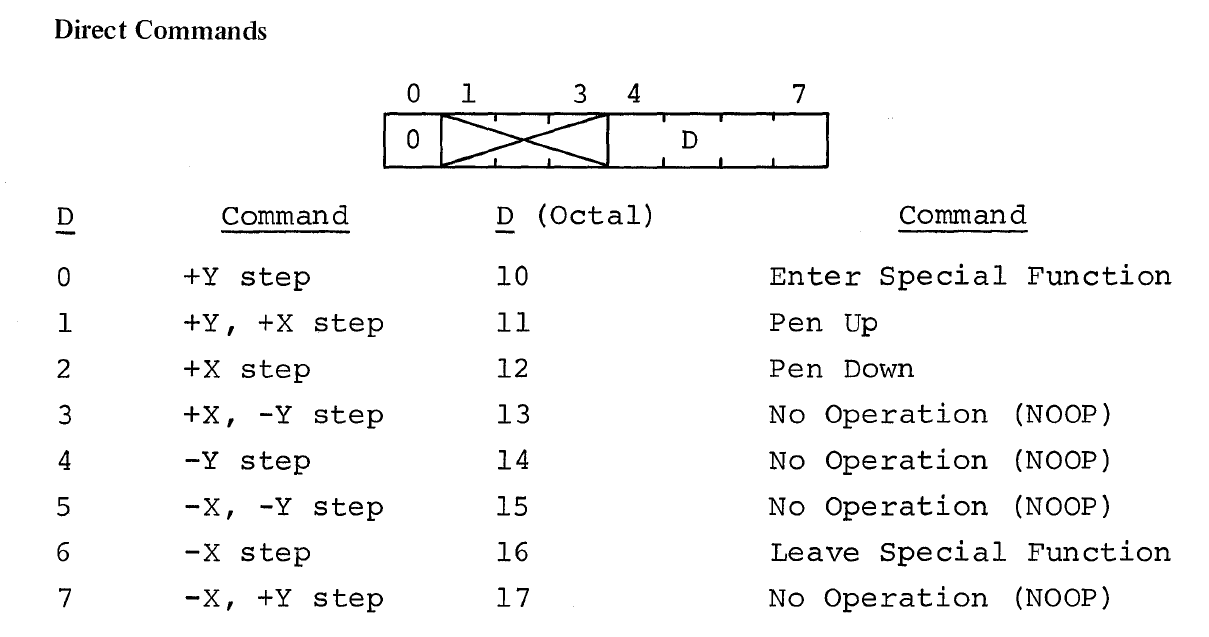 showing that octal 11 and 12 are indeed Pen Up and Pen Down commands.

It was Calcomp 763, or its narrow variant Calcomp 765. I've got a scan of a page from "Машинная графика для системы БЭСМ-алгол" ("Computer graphics for the BESM-ALGOL system" by V. V. Kobelev). 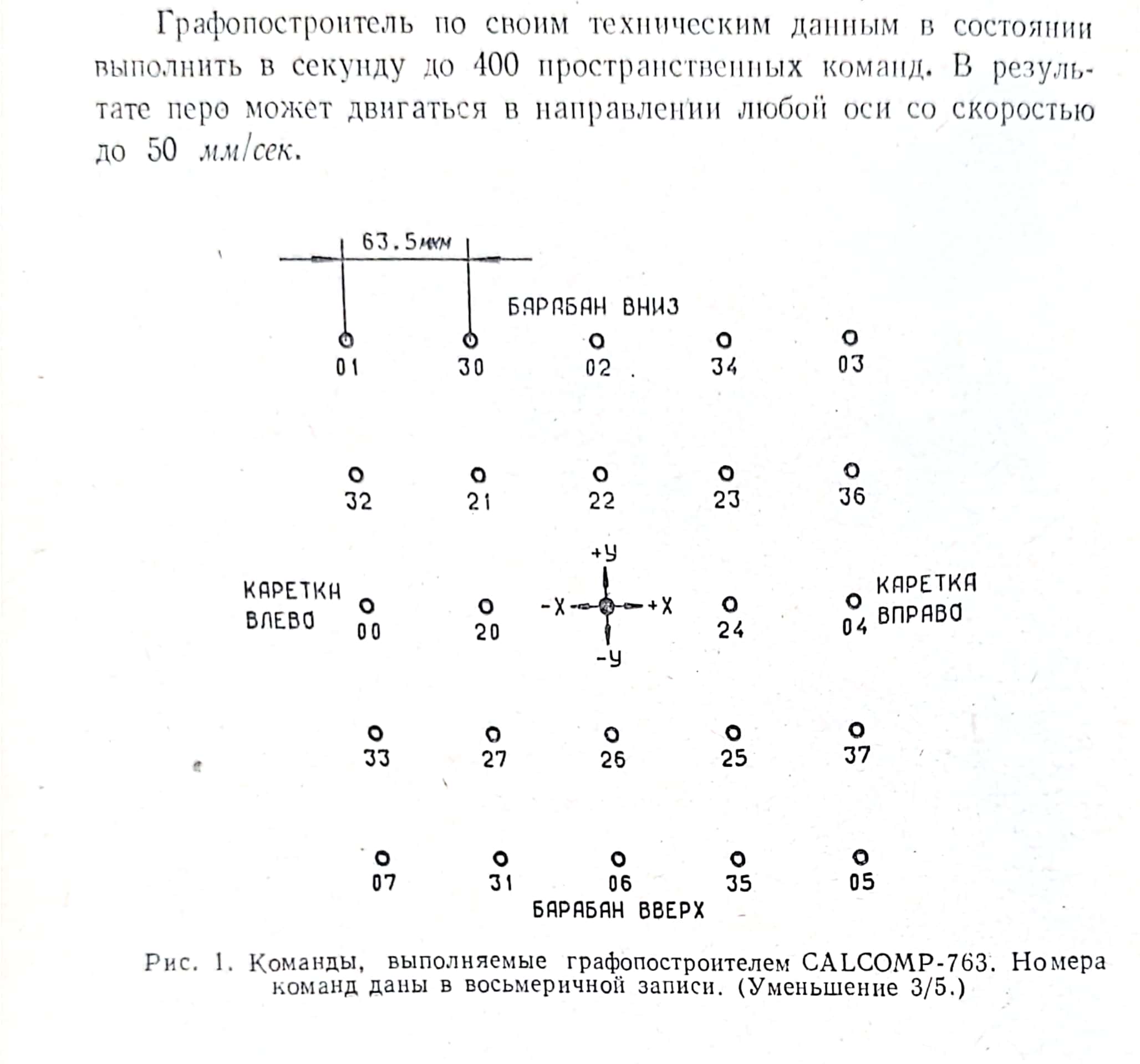 The preamble in that image states:

The plotter is able to execute up to 400 spatial commands per second. As a result, the pen can move in the direction of any axis at a speed of up to 50 mm/second.

The measurement between 01 and 30 is 63.5 micrometers and the text around the image is (top/bottom) "drum down/up" and (left/right) "carriage left/right".

The title of the image is:

Fig 1. Commands executed by the CALCOMP-763 plotter. The command numbers are given in octal notation. (Scale 3/5.)

28
Which computers had redefinable character sets?
24
What techniques were used to reduce the required re-rendering in 3D programs?
20
Can modern AI be used to program impressive graphics effects on very low performance home-retrocomputers, in particular 'A 3D-rotating-cube'
11
What graphics sytems used display lists?
15
Which computers used the Intel 82786 graphics chips, and what sort of commercial success did that chip attain?
10
Which system was the first which was capable of running graphics programs remotely?
42
Was AGP only ever used for graphics cards?
4
What are these graphical display commands?
5
What is the model of fast CAD printer used in Pentagon Wars?
5
What is this "switch register - display" and what was it used for?