Why do Game Boy Colors not want nickel-cadmium batteries?

This is a page from the manual for the Game Boy Color: 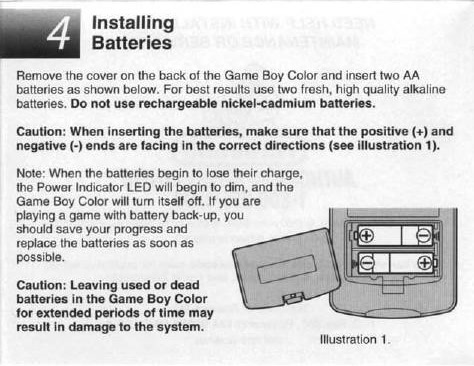 There is no explanation as to why this is, or how this can be, but it claims that one must not use rechargeable nickel-cadmium batteries.

I suspect more "don't disappoint the users" than "harm to the device".

From the Wikipedia AA article, not only is the nominal voltage lower (1.2V vs. 1.5V for both alkaline and cheap zinc-carbon), the "Max. energy at nominal voltage and 50mA drain" is *significantly lower:

I don't know the actual power requirements of the Game Boy Color. According to Wikipedia, it used two AA batteries or a 3V/0.6W adapter and up to 10 hours of gameplay on batteries. 3.9Wh x 2 = 7.8Wh/10 hours = 0.78W, which is close to a nominal 0.6W on the adapter. That would translate into 6 hours on Zinc-carbon or 4 hours on NiCd.

The 3V adapter confirms the nominal target voltage of 3V. It really is quite plausible that the Game Boy Color would not work very well even with freshly charged NiCd due to the 2.4V nominal output. But even if it did, it wouldn't last long.

Standard alkaline batteries are nominally rated for 1.5V, but they can have more than 1.6V when brand new and are considered to be discharged at around 1.1V or so, depending on application.

Standard rechargeable batteries that are intended to be used in place of standard alkaline batteries in consumer electronics have less voltage. Nominally they are rated for 1.2V, for example NiCd batteries can have around 1.4V when fully charged and are considered to be discharged at around 1.0V.

So basically, the device is designed to use 1.5V alkaline batteries, and when using NiCd rechargeable batteries, the device can complain about batteries being empty and shut itself down, even though batteries are not empty yet. In case of NiCd batteries, they degrade faster when only partially charged and recharged, as they perform better when fully discharged before recharging.

And alkaline batteries are safer than rechargeable batteries, especially in the hands of children, as the device is basically a toy.

The manual only talks about NiCd batteries, as while NiMH batteries did exist, they might not have been so popular everywhere due to various reasons.

Most likely reason I think is that when NiCd batteries discharge, they stay at almost 1.2V for most of their discharge cycle then go from 1.2 to 0 volts very quickly, so the low batt warning is unlikely to be on for very long if at all, and the player being unable to save the game, if it simply turns itself off with little to no warning.

Not the answer you're looking for? Browse other questions tagged hardware nintendo power game-boy battery or ask your own question.

6
Game Boy Sound System Unused Memory Locations
12
Game Boy DMG to VGA
2
Game Boy save problem
16
How did the Game Boy Advance stretch Game Boy games to widescreen?
22
Why is the unchangable Nintendo Game Boy logo in the cartridge?
3
When first CMOS versions of Z80 became available and were they ever used in (non-portable) home computers?
15
Why did the Rumble Pak for the Nintendo 64 require batteries when it actually apparently doesn't?
21
Did the Super Game Boy (1) run 2.5% or 4% faster than a Game Boy?
10
Does Game Boy Color have *perfect* simulation of original Game Boy games?