What information could be recovered from visualized magnetic information?

I was wondering how the data on a floppy disk physically looks like. With data stored on a magnetic disk obviously that isn't visible. The Wikipedia article on floppy disks however shows a beautiful visualization of the magnetic information on floppy disk recorded with CMOS-MagView, a high-resolution and precise measuring and visualization system for magnetic materials.

Below visualization is obviously not a full disk scan but considering we had a full disk scanned and visualized in that format: What information could be extracted from visualized magnetic information? Could it be visualization be decoded into data? What does it tell us about the quality of the material? Could we tell what formatting type was used on this floppy disk? Are the vertical stripes the separation of tracks and the horizontal thin stripes sectors? Or are we looking at (a part of) one sector or cluster?

Lastly, has CMOS-MagView or a similar system ever been used as a (non-intrusive) data recovery method? 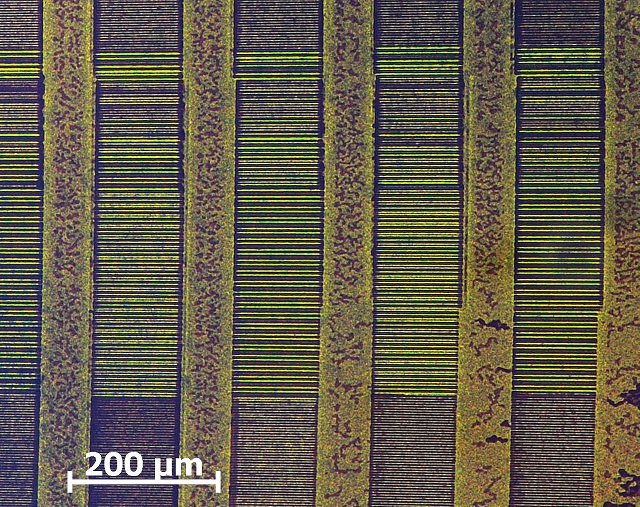 What information could be extracted from visualized magnetic information?

The very same as with a magnetic head: flux changes - and from there everything else, like headers, sectors and the data within.

Could below visualization be decoded into data?

It can be decoded into a bitstream, as it seems to hold one. But I doubt that the shown section is long enough to regain useful information.

What does it tell us about the quality of the material?

Nothing, it tells about magnetic flux changes. That is what magnetic properties are there at the moment.

Could we tell what formatting type was used on this floppy disk?

Are the vertical stripes the separation of tracks

They are obvious the gaps between tracks (running to down) as there is no coherent magnetization but random domains.

This seems not to be stretched in any way, but visibly curves, so it's tracks. Most likely of a hard disk platter, as for a floppy the gaps would be way broader in comparison to the track width. In addition fluxes on a floppy may have less sharp borders (for older drives at least)

and the horizontal thin stripes sectors? Or are we looking at (a part of) one sector

They are magnetic changes in vertical succession. Keep in mind magnetic changes are not bits/bytes, but encoded bits/bytes. The colours and 'thickness' of stripes is not real, but a side effect of visualization and timing of magnetic fluxes. From the type of magnetic encoding that should be on a disk we can infer what it must look like:

Taking this, the shown part may cover the area two sectors and gap/synchronisation/header data inbetween. Rotational sequence seems to be bottom to top showing

Clusters are no units of magnetic recording, they are logical structures used in storage management. Only sectors (ordered in tracks) can be found on a magnetic media

Lastly, has CMOS-MagView or a similar system ever been used as a (non-intrusive) data recovery method?

I would guess so. Then again, it's a huge effort to reach something that can be done by simply using a drive to read the platter. Cost will be quite high. Even with destroyed drives recovery usually done by taking the platters out, careful cleaning and mounting them in a new drive to finally read what is hopefully left.

P.S.: In Ye Olde Days it was common to read tapes, but as well disks visually by applying magnetic fluid. The human brain works quite well to decode this - at least once trained to see the diffeence. Been there, done that_))

Not the answer you're looking for? Browse other questions tagged floppy-disk storage magnetic-tape or ask your own question.

0
Could visual inspection of the magnetic disk be used to detect the quality (or damages) of a floppy disk?

35
What modification is required from a PC floppy for use in Amiga?
3
What is the process for TRS-80 Model I & III to boot from disk?
7
Could Tandy TRS-80 Color Computers boot from disk at all?
9
What is the effect of direct exposure of the magnetic disk of a floppy to ultraviolet (UV) light?
0
Could visual inspection of the magnetic disk be used to detect the quality (or damages) of a floppy disk?