As I have never used Graphic Environment Operating System (GEOS) on an Apple II (only I on a Commodore 64), I have always wondered were the documents created (from programs such as GeoWrite and geoPaint) compatible between the Commodore and Apple II versions?

The user interfaces definitely look similar, but that doesn't really imply much about the underlying document format.

Apple II (image from GEOS For the Apple II) 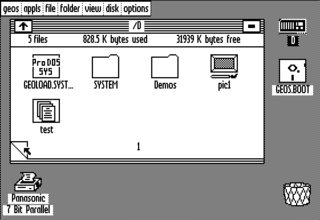 The application file formats were cross-compatible even if Diskettes had to revert to a different standard or use a modem to transfer. But you could not write a piece of software for one and expect it to work on the other without further modification even if it were based on the same processor. There was always enough difference between the two platforms (Commodore and Apple) in terms of I/O, Graphics, and other aspects that it wasn't done often. Also, since GEOS was written in Assembler, it would have been tedious to write. Think of it like trying to port software in Compute! magazine where a program is written for one version of BASIC but not yours. :)

The big selling point of GEOS was actually "Typesetting".

Before the Macintosh, it was a real chore for print shops to set up even decent magazines or flyers requiring serious money for dedicated WYSIWYG setups. But when the Mac came out, that and LaserWriter made it much cheaper to get into the print services game. GEOS was another attempt to do it which was closer to the Macintosh and Windows versions vs Broderbund's "Print Shop" for simple signs and banners.

Not the answer you're looking for? Browse other questions tagged commodore-64 apple-ii operating-system file-format or ask your own question.

6
Cross-Compatibility of UCSD p-Machine Versions?
9
How is PETSCII used by assembly-language programs?
2
Could Apple II cards be used on any 6502 platform?
4
Determining which sectors in an Apple II floppy disk/image are used when the boot sector declares more than 1 sectors
11
How was "GEOS" meant to be pronounced?