Can you read the character definitions (font) in an Apple II using PEEK in Applesoft BASIC?

Can you read the character definitions (font) from ROM in an Apple II using PEEK in Applesoft BASIC? You can do this on some other computers e.g. Sinclair ZX81, Commodore 64, and Amstrad PC1512, but some computers e.g. Luxor ABC80 use character generators that cannot be read from the computer. This would be useful for drawing big characters on screen without loading the font data from a file.

I know there can be an 80 column card in slot #3. This question applies both to Apple II Plus/Europlus with or without 80 column card. It should be a pure software solution running on the Apple II Europlus, in my case.

No, it's not possible to read the built-in text mode font data from "inside" the machine. (Update: Except perhaps in the Apple IIgs - see below.) In all Apple II models the font data is in a ROM chip used by the video output circuit.

In the Apple II and II plus (or europlus) the font data is stored in a "Text ROM" chip that contains only the font data. In the original Apple II the Text ROM is a General Instrument 2513 upper case character generator ROM. In Revision 7 the wiring of the ROM socket was changed to accommodate a 2316 ROM supplied by Apple, or a user-programmed 2716 EPROM.

In the Apple //e the font data is part of the "Video ROM" 2732 or 2764 chip that actually contains all possible video bitstream output combinations. (In the Apple //c, the same chip is called "CHAR GEN").

In the Apple IIgs (which is such a different beast that whether it really qualifies as an Apple II is debatable) there's evidence it can read the font data for testing purposes. From the Apple IIgs Firmware Reference, bottom of page 281:

As for third party Apple II video cards, such as 80-column cards, you would need to refer to the manual for a particular card, but in general they did not provide access to the font data either. 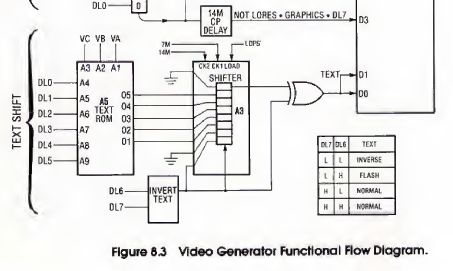 Not the answer you're looking for? Browse other questions tagged apple-ii rom applesoft-basic character-sets or ask your own question.