In this Amiga "quick kickstart guide" magazine thing that I have from when I bought an Amiga 1200 long ago (it seems to be printed in late 1995), they really go out of their way to point out that "you should always write-protect your floppies as soon as you get them". They are referring to commercial floppies that come with software on them inside a big box, rather than empty, unlabelled ones used for writing data to them.

But if that's so important (and I can see why), why didn't they simply ship in write-protected mode to begin with? Why rely on the user to manually remember to do this?

Title: THE COMPLETE KICKSTART GUIDE TO YOUR AMIGA! by the CU Amiga Magazine, page 7.

I bought a lot of original games and the floppies were always write protected from the start.

I also remember the message that appeared a lot in manuals:

What is true is that you could write unprotect them if you wanted to, which is most of the time a bad idea as bootblock viruses could make your disks unuseable.

You were more or less compelled to do that for games that had:

This combination was rare though. TBH I can't quote an example from memory but Software Preservation Society had a hard time preserving some particular games in the original form because most users had let the game write the highscores on the disk.

One particular example I remember is the game "Gods" (from The Bitmap Brothers) which came in 2 disks. Disk 1 was copy-protected (RN copylock) whereas disk 2 was 100% copiable with a standard diskcopy command. And an intro text screen instructed to make a copy of disk 2 and not play with the original, so the copy could be left unprotected and high-scores and unique passwords could be saved on it. It was essential to save the passwords at least, else you'd have to play from the start each time.

But how many users didn't know how to copy a disk (honest users mostly :)) or had only one drive and 512k memory (harder to copy a disk with that setup) and used their original disk to store high-score and passwords?

(Note that Commodore Workbench 1.3.2 disk doesn't even have the black sliding write protect on/off switch so to write on the disk you'd have to put tape where the hole was)

As Jean-François Fabre already points out quite a lot of data got lost by overwriting the wrong disk. So reminding users to write protect was a well needed advice. No matter if official documentation or, like cited, third party.

But if that's so important (and I can see why), why didn't they simply ship in write-protected mode to begin with?

There were in fact 'hard' protected disks - such that simply had no write protect hole. These were used by software distributions - at least by some companies.

Why rely on the user to manually remember to do this?

Because it still happened. Unless a disk was hard protected, there's always a chance that it got unprotected and forgotten to re-protect again. Like when changing configuration or adding updates. Yes, this should be done only to copies, but people are pople.

Hers' proof that Commodore shipped 1.3.3 system disks write-protected - no tabs! 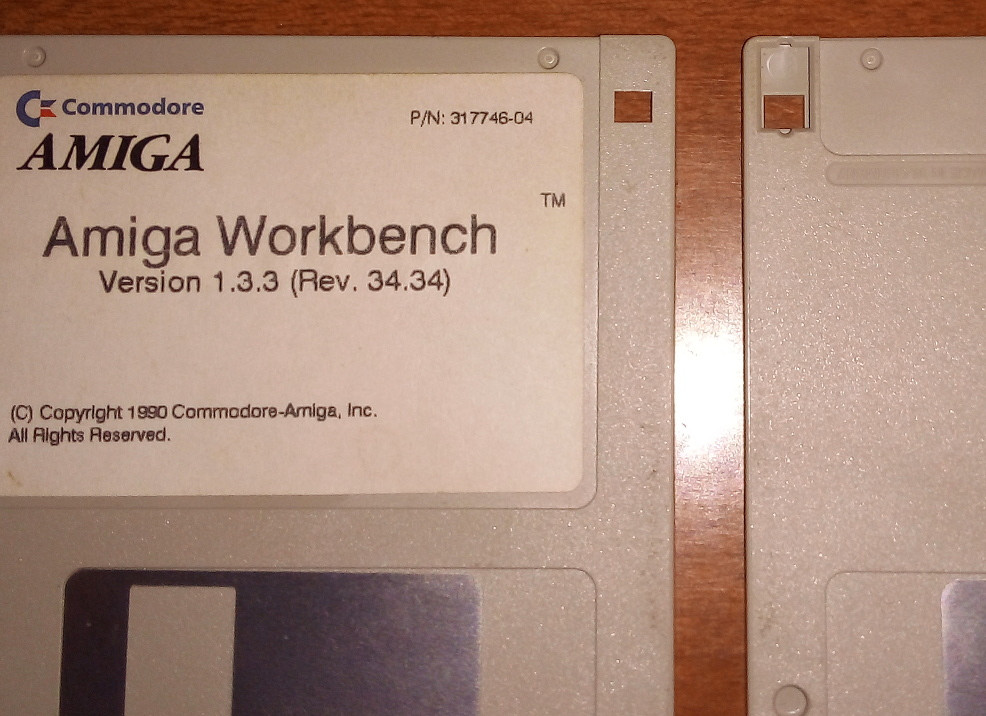 I have a vague recollection of cutting through the write-protect tabs with a knife so I could extract them on disks I duplicated for a local producer of Amiga educational software. I used SuperDuper with 3 external drives to write 4 disks at a time.

Not the answer you're looking for? Browse other questions tagged amiga floppy-disk copy-protection or ask your own question.

31
What were the differences in floppy disk formats between Amiga and IBM/PC compatible computers?
31
Can I image Amiga floppy disks on a modern computer?
7
Recovering old Commodore 5.25" floppy disks
9
Were external floppy drives for Atari ST and Amiga inter-compatible?
35
Why were floppy disks invented after hard disks?
13
Weak bits on floppy for copy protection
15
Amiga floppy disks and GCR vs MFM
27
What other tricks were there to get more data onto floppy disks?
1
How to write Apple IIgs .po disk images to Floppy Disks with an older Mac