What should I do when some of the keys of my Amiga 600 have stopped working?

I opened up an Amiga 600 to install a hard drive, and after reconnecting the keyboard ribbon and powering the computer up, at least one column of keys no longer works. What did I do wrong and what can I do to fix it?

The first hope is that this is merely the ribbon not sitting well in the socket - try to reseat it; check if a corner didn't fold up.

If it's not the case, and you don't have a spare keyboard, you're in for a "surgical" fix. The paths on the ribbon are printed with a kind of carbon component, which is brittle. In particular the fold just above the connector is a place of frequent faults. Inspect it for cracks. If you see any, you will need to obtain a graphite paste, or some other substance used in electronics to fix broken paths through application like paste. Strip the outer layer of the foil with a fine knife (the paths are actually sandwiched between them even if they seem exposed, the foil is really thin), and fix the path with the paste.

Then inspect the paths for any more cracks which might have appeared in the process of fixing that broken path...

Then fix them too...

Then assembly everything before the paste dries up completely, hoping for the best, because it's far more brittle than the paths themselves. Which also means you'll likely have to repeat the procedure every time you open the cover. With the number of broken paths likely climbing.

A total pain in the neck, but works... kinda. It's really better to get a broken A600 and just replace the keyboard.

Regardless, avoid bending the ribbon at the fold before the connector at all cost.

EDIT: I recalled one more mode of failure - if the keyboard was plugged and unplugged relatively frequently, it's likely the carbon print has rubbed off right at where the socket pins connect. It should be visible when looking against a light (bulb etc) - the light will show through the pads. In this case the best option is to trim about a millimeter of the ribbon off the end - the pads extend quite a bit above the point of connection, so there's quite a bit of spare room, and the connection will be made with fresh, unscratched part of the pads. Just use either scisors or x-acto knife (or similar), to shorten the ribbon by about a millimeter. Take care not to let the knife slide over the paths/tracks of the part that's not discarded.

I had to deal with that stuff way more often than I should have... I'd take the disk from my A600 to work, where I could mount it under Linux and point to its mount point with UAE, running emulated Amiga at work and getting stuff from the net to the disk, then in the evening reinstall it in my Amiga and make use of the goodies obtained. Of course the wear on the keyboard ribbon took its toll.

I wanted to mention additional techniques someone else has tried to strip away the outer foil. The article -- Amiga 600 - keyboard membrane fixes -- doesn't lend itself to blockquotes, so I'll summarize:

The author walks through attempts to remove the foil using different chemicals, then discovers by accident that he was able to peel the foil away by covering the membrane with a strong piece of adhesive tape and pulling it back. 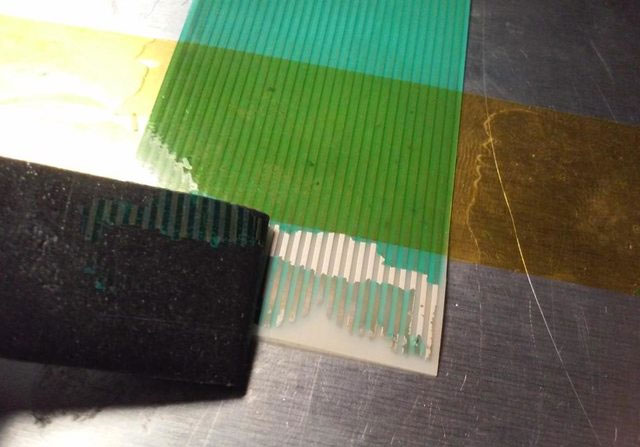 Alternately, RWAP Software in the UK is currently offering replacements for certain versions of the membrane, which are sold through a store called SellMyRetro.

There are three known membrane types:

Apparently there are minor differences in the key placements so the types do not interchange. You will need to disassemble the keyboard to get the model and revision of the green membrane.

Here is a list of search results showing all three versions for sale, two are currently available and one is on preorder as it's less common. (Guess which version my A600 has...)

35
What modification is required from a PC floppy for use in Amiga?
22
How did programs/patches stopping Amiga idle floppy drive noise work?
8
Repairing/Lubing/Fixing Amiga 500 floppy drive
6
Can't type angle bracket characters in AmigaOS 4.1 on WinUAE
14
What is the minimum set of Kickstart kernel modules to allow an Amiga to boot?
11
Set keyboard layout in Amiga Workbench 3.1
12
How Amiga A590 autoboot ROM and bootable floppy disk works?
8
Why does the Amiga 500 have half the HSYNC pulses seperately compared to those in CSYNC?
19
Why do drives occupy memory on Amigas
7
What was an Amiga "X-Drive"?