I have a vague recollection back in the late 70s of using a wonderful program called Locksmith (from memory, so I could be wrong).

It apparently could handle all the different ways that disk-based programs prevented themselves from being copied.

My memory is dim but I remember the term "nibble copier" if that's of any assistance.

I was wondering what the various copy protection methods were, how they worked, and how Locksmith (or any other method) bypassed the protections.

That question is kind of overly broad, as it essentially asks to explain all ways a floppy image can be composed and written - which is next to infinit. A short search may turn up quite a lot of hits.

So I'd like to focus on that 'nibble copy' part:

'Bit nibbler' (*1) is a term coined in times of GCR for what today may be called 'raw copy'. It describes access to disk data based on magnetic flux changes, in sequence as they are written. While used on many platforms, it was especially popular on the Apple II, as it's disk system was almost entirely software defined. A fierce race between protection schemes and copy programs lasted over the whole time the Apple II as mainstream machine.

Lock Smith is still one of the best known ones. It was the first (widely known) program that did not copy logical data by using the standard RWTS (*2) routine, the lowest level of DOS access, but reading and reproducing the raw, GCR data.

Lock Smith made its name by constantly improving - from simply nibble wise copy all the way to track timing and orientation. But it wasn't the only one. There was a whole armada, from rather plain COPYA and COPY II all the way to NIBBLER and BACK IT UP. In fact, when copying disks - at least in a more than 'one a month' fashion - one had to use a wide variety of programs, as each had its advantages - including plain copy programs, as not every disk of a set was protected to the max. Plain (DOS based) programs had the advantage of needing less memory to hold the image, so a copy could be done faster than with programs that had to handle nibbles.

In addition, while these programs were good at automatically copying many default schemes, one still had to figure out the details for each disk, and often different schemes for different tracks.

So for ... well, let's say "less casual" operation, one had to make notes, create a data base on how to copy which disk. This was mine: 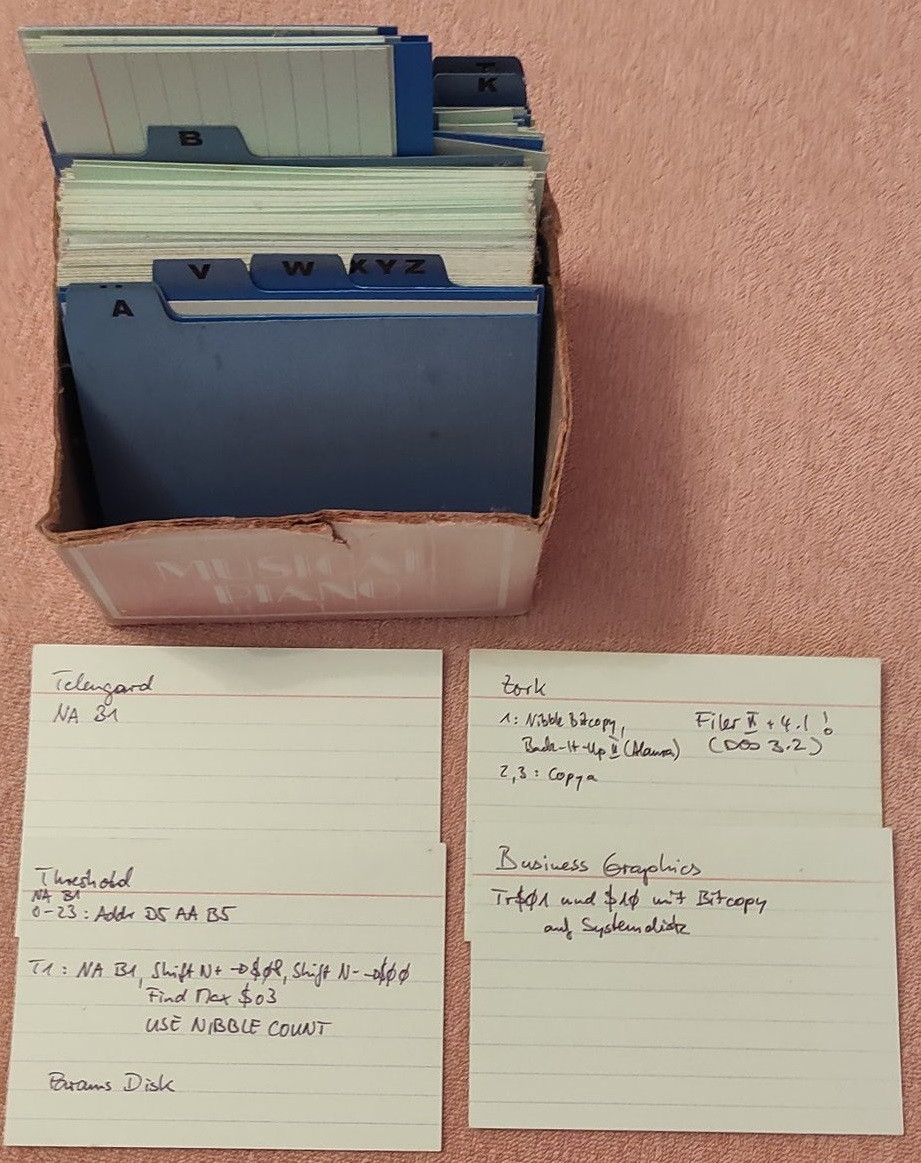 *2 - Read or Write Track and Sector - the very basic routine DOS provided to access and en/decode a 256 byte sector.

I remember Locksmith, too, and I actually still have it on floppy somewhere.

There was a wide variety of protection schemes, from "let's use non-standard code for GCR address and data marks" or "let's calculate checksums in a different way" to the infamous "let's make a disk with spiral tracks, like a record".

If you want war stories, a modern-day cracker using the nick 4am has cracked quite a few, and has done a few write-ups of more interesting ones (though I am not able to google a systematic collection of the write-ups, maybe someone else can locate them).

I guess if anyone would be able to give a good summary of protection methods used, it would be him.

Basically Locksmith and other nibbler copy programs worked by reading the raw data of a complete track, and then writing it without converting it to actual data, circumventing any protection scheme that relied on non-standard encoding.

Additionally, they could display the raw it so you could figure out oddities and make manual adjustments.

You can find some detailed descriptions below. There are two primary classes of protections that Locksmith could not duplicate - "E7" and "weak bits", the first of which was used to protect Locksmith itself!

In Search of the Most Amazing Thing; or, Towards a Universal Method to Defeat E7 Protection on the Apple II Platform (pdf) - PoC||GTFO 0x11 (3)

Not the answer you're looking for? Browse other questions tagged apple-ii copy-protection or ask your own question.

31
How does "bit-slip" copy protection work?
10
Was the Amstrad's file protection considered secure in 1985?
9
How specific was the Apple II floppy disk controller?
13
Weak bits on floppy for copy protection
43
How did Apple II BASIC programs protect against listing?
3
Is there any RAM disk software available for Apple II DOS 3.3?
5
Copy content between floppy disks on Apple II
6
Were commercial Amiga floppy disks shipped with write protection?
10
How to make a maximally compatible Integer BASIC (Apple II) game disk for the Internet Archive?