How to get sound working in pure DOS with a CMI8330 card?

I have a tower PC from the early 2000's. I got this system second-hand and as-is so I do not have any original driver resources. I have installed Windows 95 mainly to play old Windows and DOS games.

Recently, I have fiddled around trying to get sound working as there were no working drivers installed. The hardware manager told me that my onboard sound card is a CMI8330, for which I found a driver online and managed to get it installed. Now, the Windows part of the machine has working sound (start-up sound, in-game sound in Settlers II).

I had hoped for sound to magically appear for the DOS game (Crystal Caves) that I was playing, too. (I know that sound exists as I remember playing the exact same diskette on a different PC and having sound in the day.) However, that did not happen. Googling told me, there needs to be a SET BLASTER= line in the autoexec.bat which wasn’t there. I did my best to look up the required values for the sound card and tried entering them. All in all, my autoexec.bat now looks like this:

I have tried a number of different T values to no avail. I am confident that A, I and D are correct as entered (I did not modify the default values in the driver settings but did find those exact ones).

What else might I try to get sound working for the DOS game? Is there something I may have completely missed?

(In case it wasn’t obvious: I am accessing DOS by restarting into MS-DOS mode; the good old Win95 feature.)

To configure your CMI-8330 sound card under plain DOS, without Windows, you need to install the CMI-8330 initialisation tool. You can download it from HelpDrivers (scroll down, look for c30dos12.zip), or from the VOGONS vintage driver library.

Extract the archive and run INSTALL.EXE from plain DOS; when it asks for a Windows 3 installation directory, skip the Windows installation by pressing Enter. This will set everything up so that sound works under DOS.

This might not help for Crystal Caves however; it only uses the PC speaker. If your motherboard emulates the PC speaker using the CMI-8330 (if that’s possible), you’ll find relevant settings in the utilities described above; otherwise, you might need to find an appropriate speaker and connect it to the corresponding motherboard header.

You may also need to enable sound effects in the game: start Crystal Caves, then start a game, and inside the game, press Esc to get the in-game menu, T to toggle sound, and Y to enable sound: 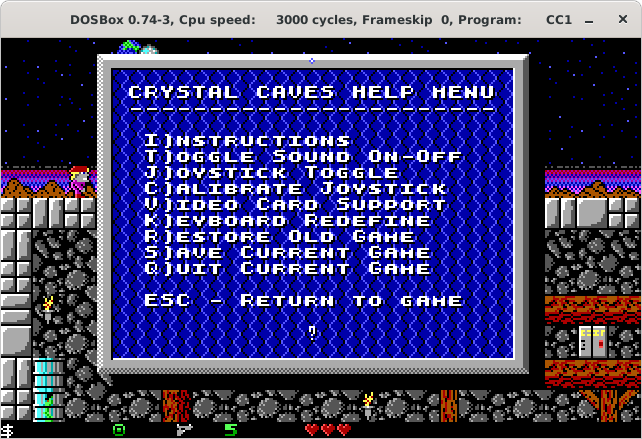 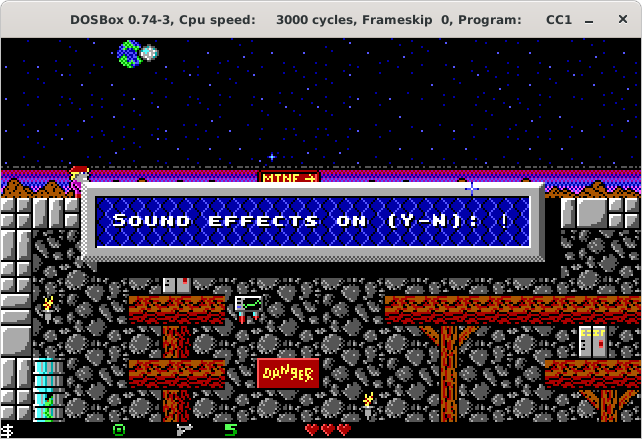 All the non-original Creative Labs Sound Blaster sound cards I saw back in the day required to initialize them with some executable(s) that was part of the sound driver, which you are not doing at all. This was done either in AUTOEXEC.BAT or CONFIG.SYS or both. Even newer Creative Lab Sound Blasters need such a thing.

After searching my archives, I found out that for CMEDIA CMI8330 sound cards, the DOS driver executables are:

I cannot test them as I no longer have a CMI8330 card on board working, and both *.COM executables throw message on me that PCI CMI8330 card is not present. The last EXE is just some fix for some games and not a driver.

If you do not have such files then try to download them; this is the first Google hit that looks promising (contains the SETAUDIO.COM file in listing): CMedia DOS Mode MPU-401 Emulator Driver.

According to VOGONS: cmi8738 pci - dos (no FX), you should add this to your autoexec.bat:

But its possible that the driver executables will make that entries on their own once executed.

In case you have no luck on finding those driver files, comment me and I will post them somewhere.

Another option is to install the awesome VDM sound driver on Windows and start your game under Windows. The driver will emulate Sound Blaster on any sound card that is installed in Windows; this was the only known option for newer sound cards that did not have any DOS drivers like SB 128 Live. However this will no longer work under pure DOS.

Not the answer you're looking for? Browse other questions tagged ms-dos sound or ask your own question.

14
Why would a CD-ROM in an MS-DOS 6.22 system not allow file access?
3
Can't get the AY-3-8913 sound chip to work with my z80 (added schematic)
8
How do I create a boot menu to select between Windows and DOS?
9
QEMU emulating MS-DOS cannot access CD-ROM
22
Sound driver for DOS or Windows 3.x that used the PC speaker?
4
Use a USB mouse for DOS games
3
PS/2 Keyboard not working on Windows 95 and MS-DOS
8
How was the CLOCK$ device used in MS-DOS?