When/why did computers come to have push-button main power switches where on and off is the same push action?

In the top answer to Why were animated screensavers used instead of a black screen on CRT monitors? the main reason was said to be that it avoids users accidentally turning off the machine, thinking it is turned off and trying to turn it on.

Well, that's indeed not a good thing to happen, especially back when it posed a real risk to hard drives. But... who had the idea of using power buttons that allow this issue to happen in the first place? It seems utterly trivial and obvious to avoid it by using flip power switches with a built-in light, like those found in many devices (guitar amps, fridges, power strips...).
In more modern computers there are of course real reasons for having push buttons (which anyways aren't directly connected to the power), but back when switches really were just mechanical switches this doesn't apply.

So: why use push power buttons?

Clarification: I'm specifically talking about the early mechanical push switches used in the 80s, which actually did power the machine hard-off with just a simple press, not only send a signal to the OS to shut down gracefully. (I thought this was obvious from the original questions, but seemingly not.)

So: why use push power buttons?

The same reason that it is used in other appliances: it's convenient.

Just think, early (IBMish) PC had their power switches at the right side all the way at the back (*2). One had to to feel one's way all around to flip it - of course with no chance to look at its state. The switch was part of the power supply. This made sure that all high voltage switching only happens within the PSU. 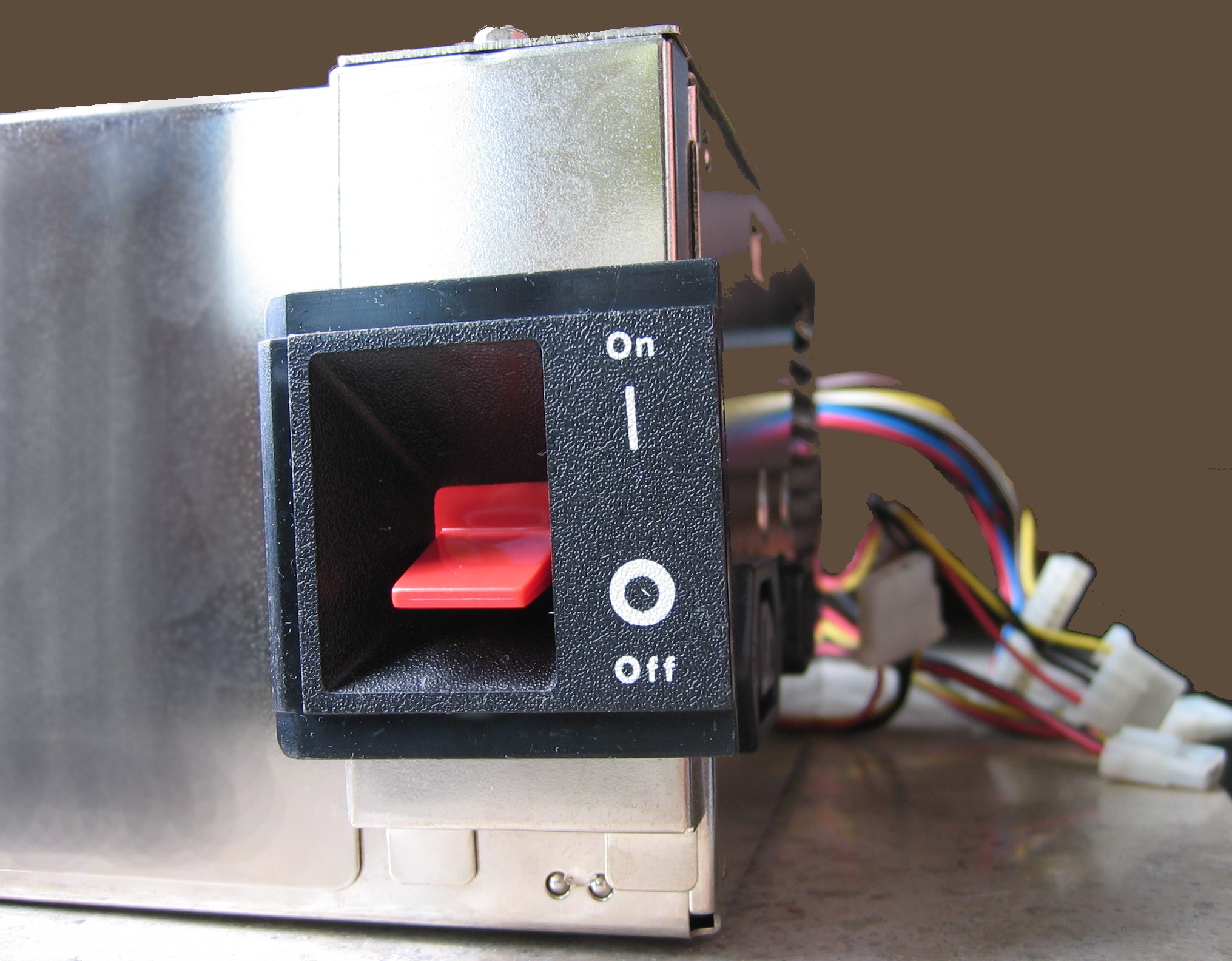 Putting it up front wasn't really a solution as this would break the encapsulation of high voltage within the PSU. Keep in mind, the PC was a device intended to be opened by any average user, thus exposure to high voltage was a complete no - usually prohibited by most electric codes worldwide. The same reason goes for why it had to switch mains, as only that would guarantee that the PC is completely powered off if switched off but not unplugged - which, depending on workspace setup may not always be possible.

Moving the PSU upfront was not really a great idea, as that would mean having the power cord coming out on the side. Only a PSU reaching all across the case would avoid that.

Using a push switch is about the only (*1) solution, implemented by extending the visible push button by a long 'stick', going all the way back to the PSU, pushing the 'real' toggling power switch. Now the user could operate the power switch from the front of the computer while still having a code-legal encapsulated PSU at the back. 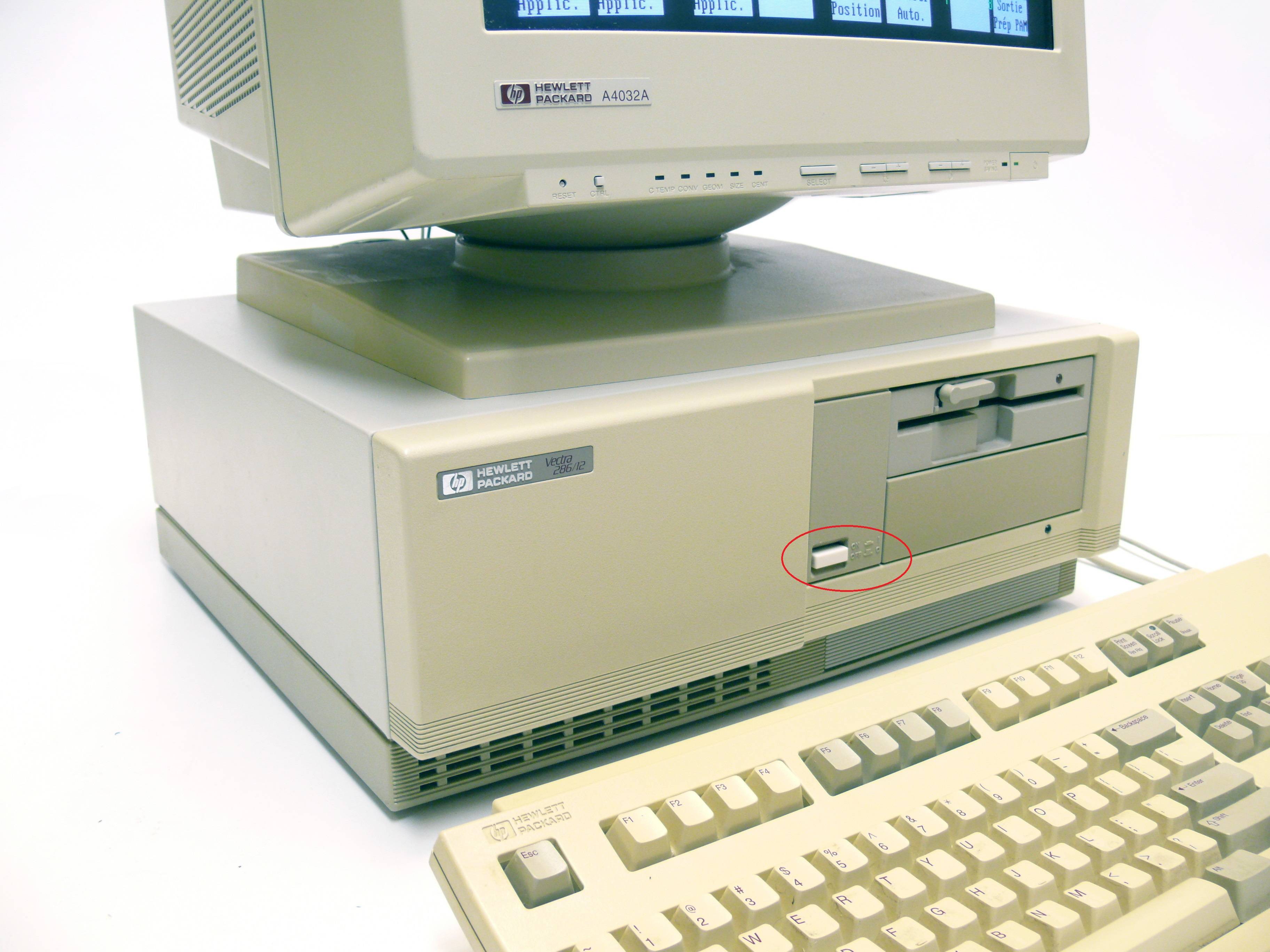 (Picture taken from Wikipedia; marking mine)

Long story short: It's all about convenience.

Equally important, adding a certain type of switch is a design decision not necessary based on technical issues, but what look/feel/operation habit a designer wanted to achieve.

Besides, in real life, no user checks the state of a switch before flipping it, when he already assumes the computer being off - after all, he already ignores other easy to check signs like lit LED on keyboard, case or monitor.

*1 - which BTW was the same with the Apple II/III series, undoubtedly the major prototype for the IBM PC, with their enclosed PSU and a switch on the back.

*2 - Of course, like almost always there are other possible solutions. For example using some secondary low-voltage circuit, much like for the later power button, but operated by a switch. Just, this would complicate the PSU considerably, and thus increase the price - not anything compatible manufacturers, usually fighting on cost base, would want.

Equally, if not more important:

It would be a technical divergence from the example set by IBM. IBM had a fully concealed PSU. Having a different design, no matter whether better or worse compared to IBM, has always been used as a point by IBM sales force - and even more in the mind of decision making on buyer side. So it was extremely important for makers of compatibles to withstand that. A compatible had to be the same, or better, without changing anything. It took many years until the market was levered in a way to incorporate new ways.

AT power supplies often did have a line-voltage flip switch. Indeed many later machines also have such a switch around the back to totally switch off the system. However ATX and later systems use a "soft switch" which yields a number of capabilities.

First, and most obviously, it enables the computer to switch itself off. Once the software shutdown has completed the "power on" line is allowed to float up to +5V and the PSU drops the power good signal and shortly thereafter all power lines except +5V standby. This could not easily and cheaply be done with a flip switch.

Next, it allows the system to start itself up. For instance a wake-on-lan interface allows a remote "wake up" signal to be sent. The +5Vsb allows a minimal set of subsystems to be active such as PXE. On receipt of the message PXE grounds the power on line and the PSU powers up the main supplies, then asserts power good once things are stable.

It's helpful to regard the front panel switch not as THE power switch, but as A switch amongst a few possible switches. Indeed, it's not even a switch, it is merely a request to the PSU.

Think back to when computers were large, lived in air conditioned rooms, and had a few dozen switches on various cabinets. Push buttons were common for "toggle" functions: online/offline, load/unload, power on/off.

Square buttons with a light behind them were common. Check out this paper tape reader, and the other box behind it. 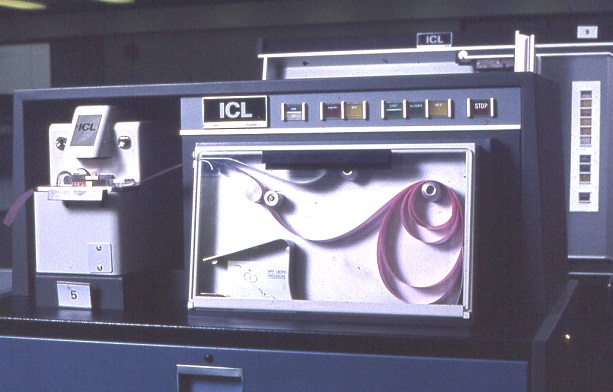 To answer the 'When' part of the question: At least as early as 1982, when the Sanyo MBC-550 was released with a push button power switch on the front. The MBC picks up its design cues from contemporary video recorders (compare the Sanyo VTC-5000) on which the power switch was also a front-mounted push button.

Internally, the power supply of the MBC occupies the right-hand edge of the case from front to back, so there is no need for a mains-voltage wire between the power supply and a separate switch.

I know nothing about what was going on in the product planning here. But I do note one thing about the machines I bought that had a power switch. These machines had the power switch directly connected to the power supply. If you hit the switch, you cut the power. Makes sense. Except that it doesn't make sense. If you cut the power without an orderly shutdown of the operating system, you leave the disk in an internally inconsistent state. That means that, the next time you start up the operating system, you have to run chkdsk to clean up the data state of the disk before you can safely run appps. The first computer I bought with a pushbutton also had the following feature. The pushbutton didn't cut power. Instead, it generated an event for windows to field. Windows shut itself down taking several seconds to do so, or maybe even more. Once windows was shut down, windows signalled the power supply to cut the power.
All of a sudden the rule that only dummies hit the off switch was reversed. The only people who didn't hit the power button were old timers who remembered that cutting power would cause chkdsk to run at startup.

Not the answer you're looking for? Browse other questions tagged power user-interface or ask your own question.

33
Why were animated screensavers used instead of a black screen on CRT monitors?

15
Why did the IBM PC have an internal power supply?
1
Why did the description of the Windows shutdown command imply power-off was manual even with ACPI available?