Why didn't the original Commodore PET computer use a standard typewriter style keyboard?

Being a huge fan of Commodore, I've often wondered why Commodore would use such a horrible keyboard layout for their premier computer utilizing an alpha-numeric keyboard. My only guesses would be cost, space, or their origins as a calculator company. While the Wikipedia page insinuates a lack of space, it seems that the cassette could have easily been relocated to the top or side of the monitor... 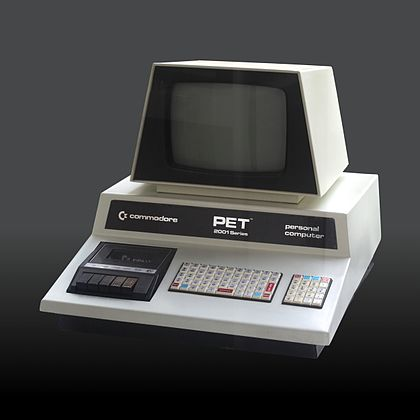 history commodore commodore-pet
Share
Improve this question
edited May 10 at 3:10

Why didn't the original Commodore PET computer use a standard typewriter style keyboard?

Putting aside that 'why not' is a hypothetical question thus a definitive answer can rarely been given, it's rather obvious that the answer might be the same as for why it was delivered with a wonky cassette recorder instead of a floppy drive:

The PET was intended as a low priced entry level hobbyist system for just USD 795 - there was simply no legroom for a full keyboard.

At the time a typewriter keyboard like a Suntronic IV (see Byte 1/76 p. 81) would be about 80 USD retail. That would have been already 10% of the whole unit price. Going for a calculator type keyboard, made to spec, from one of their existing suppliers (*1) would not only cut cost but ensure delivery as well. Not to mention that this eased the addition of special/dedicated keys like cursor, rvs or run/stop

While the Wikipedia page insinuates a lack of space, it seems that the cassette could have easily been relocated to the top or side of the monitor...

A standard typewriter keyboard without a num pad could have fitted well without (re)moving the cassette drive.

*1 - Mitsumi in case of the PET keyboard. They already supplied keyboards for their mid range desktop calculators and came up with a way to save on key labeling by using blank key and glue tiny colour printed metal stickers in each. Rather good looking and saving the effort to create castings for each key. Great for low production numbers, getting costly if it turns out to be a success :))

Jack Tramiel - Commodore's founder and CEO - was a penny pincher with no clue about the computer business. He was fixated on "vertical integration", i.e. manufacturing as much of a product as possible in Commodore's various facilities.

That's why the PET's case looks the way it does: Commodore owned a factory in Canada that manufactured steel office furniture, and that's the kind of case these people could come up with.

Commodore was also a big player in the electronic calculator business. So when his chief (computer) engineer approached Tramiel about a keyboard for the new computer he was designing, Tramiel decided they would use a calculator keyboard. Because - (a) it's much cheaper and (b) they could produce it themselves and/or had a supplier that he had already forced into giving him insanely good prices (not sure which it was)

The engineer tried to explain to Tramiel that this was a stupid idea, but Tramiel was not the kind of guy that's easily swayed, so the thing shipped with a calculator keyboard. They got a lot of flack for that, of course - so it was changed into an actual typewriter keyboard with the next model.

The story of the design of the Commodore PET has been well-researched, and documented, in Brian Bagnall's book Commodore: A Company on the Edge. The initial driver for the decision to go with a small-footprint "chicklet" keyboard was the limitation on physical space for a conventional keyboard, as found in computer terminals of the time. Such is relayed by Chuck Peddle, lead designer, in Bagnall's book:

"I'm having trouble making a regular keyboard fit in the case," explains Peddle. "I'm wandering around and Jack (Tramiel) is talking to the Japanese engineers. I wandered in and showed Jack the problem."

In the ensuing exchange, it's Tramiel that makes the suggestion of using existing suppliers and making a keyboard that will fit the space constraints based from existing calculator parts. Peddle agrees to this course of action, and only recognizes in hindsight that the "chicklet" keyboard is not practical for most users. Thus, the change to the PET in the next revision (PET 2001-N) to use a standard computer terminal keyboard, suitable for touch-typists.

Taken without context, this may seem like a foolish or arbitrary choice. I suspect that everyone involved with the PET in 1976 was quite smitten with their prototype's industrial design. They were trying to implement to a "vision", and it was a rather compelling vision for a "personal computer" at a time when no such product yet existed. Naturally, spoiling this design vision would not be an easy choice for any of them.

Below is a photo of the PET "vision" prototype - nicely crafted - out of wood. 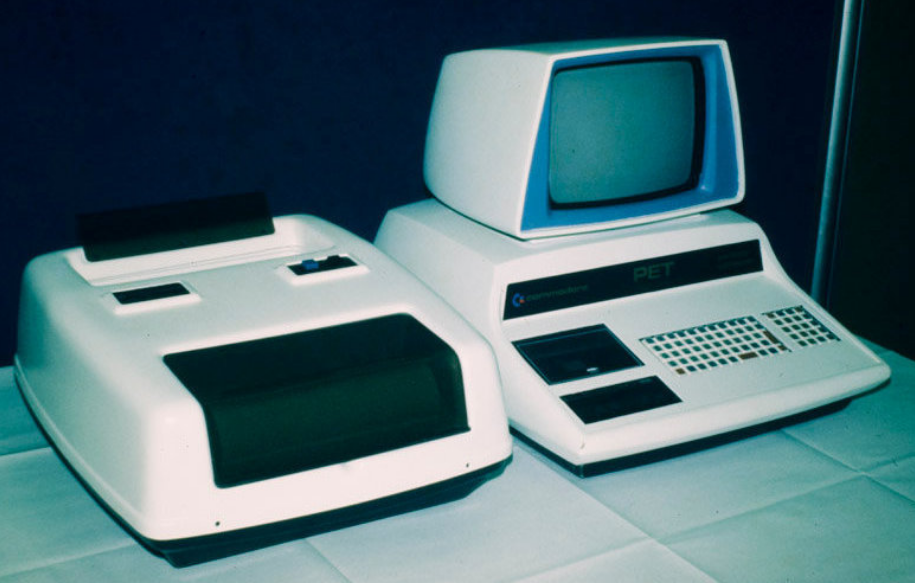 Broadly because back then, computer designers relied on either experience or imagination.

Back then, experience came almost solely from typewriters and imagination largely discounted experience.

On top of those technicalities, did no-one notice that Tramiel tried to popularise TOS, for Tramiel Operating System… despite the obvious fact that huge numbers of Users would see TOS as short for "tosser" as equivalent to "masturbator"?

Who truly believes that doesn't drag any design decision of Tramiel's into deep doubt?

Not the answer you're looking for? Browse other questions tagged history commodore commodore-pet or ask your own question.

42
Why did 80x25 become the text monitor standard?
14
How did the Commodore PET 80 column display work?
8
Who established the original F1 desktop BIOS key and why did laptops use a different key?
14
Is there a reason why MS-DOS didn't use more English words for commands?
11
Did all integrated Commodore PET monitors always use 60 Hz refresh?
8
Why did the Commodore PET 2001 take so long to ship?
12
Commodore BASIC: why was the PET's GOTO so slow?
8
Did the keyboard "scancodes" available to Commodore PET software differ between models?