How can I make an 80 GB hard drive work with an Asus P2L97 motherboard?

I thought it was due to the partitioning of the disk but probably this is due to the BIOS limiting the HDD size, as suggested here.

This disc is the result of a backup of only 3.2 GB so I can reduce its size to 4 GB

I found the motherboard manual and set the MODE to LBA or AUTO, as suggested I tried to enter a custom drive type in BIOS and max out all three values for cylinders, heads, and sectors per track: 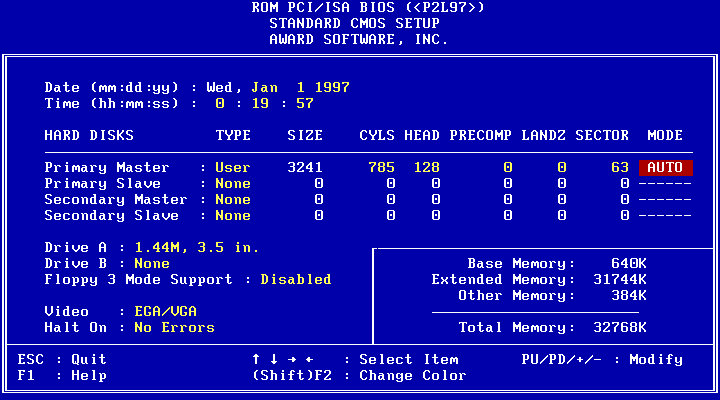 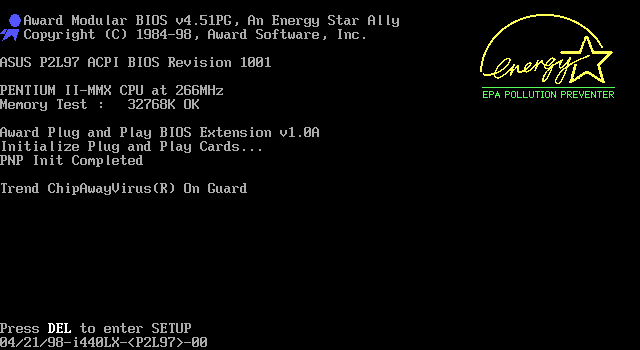 I was looking for a drive overlay and downloaded Data LifeGuard Tools (WD) but it is an executable to launch from an Windows OS.

Do you have any suggestions for getting the HDD recognized by the BIOS? or an idea to install the drive overlay on the MBR of the HDD from SystemRescue?

EDIT: I updated the BIOS to the last version (it was hard to find a floppy disk that works) with this result: 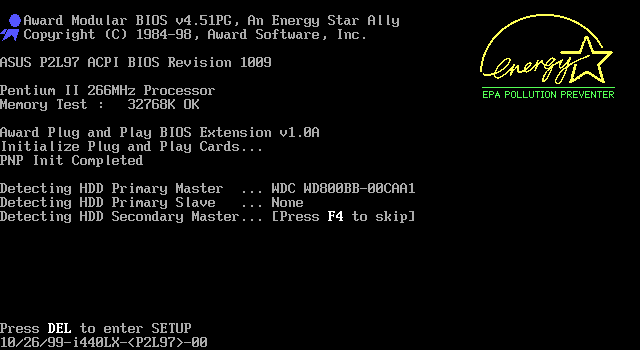 That seems good but the computer crashes on the following screen without an error message:: 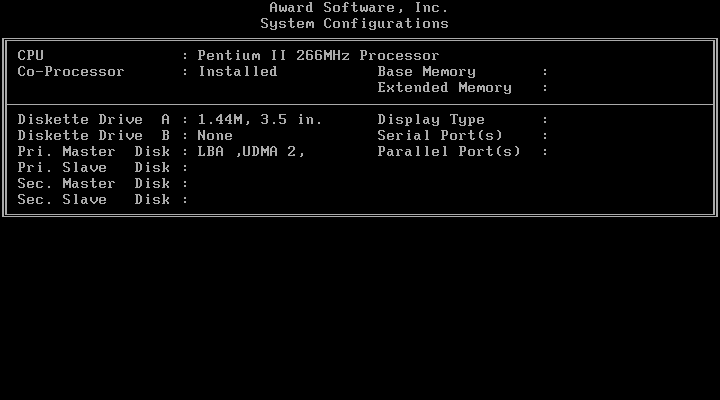 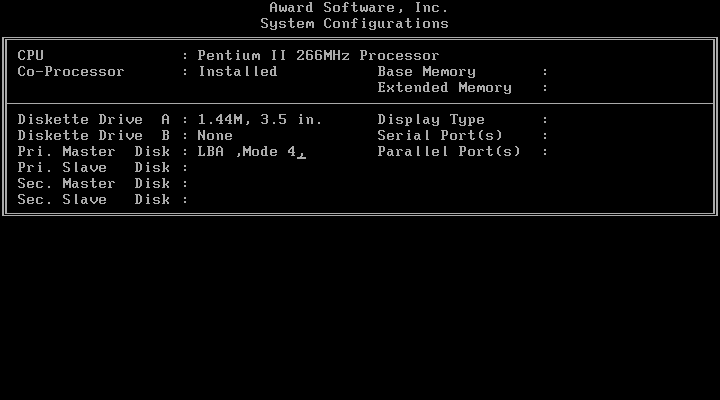 I also plugged the HDD into another computer: auto-detection in BIOS is OK 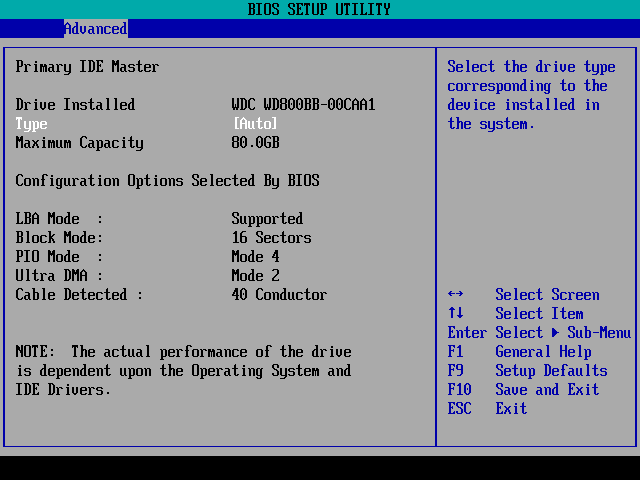 I will try to run OnTrack Disk Manager 9.57

You need a BIOS update. Version 1009 from November 1999 already fixes it according to release notes. It is the final official BIOS version and newer beta releases exist, but must be chosen carefully based on your exact motherboard hardware version/revision type. 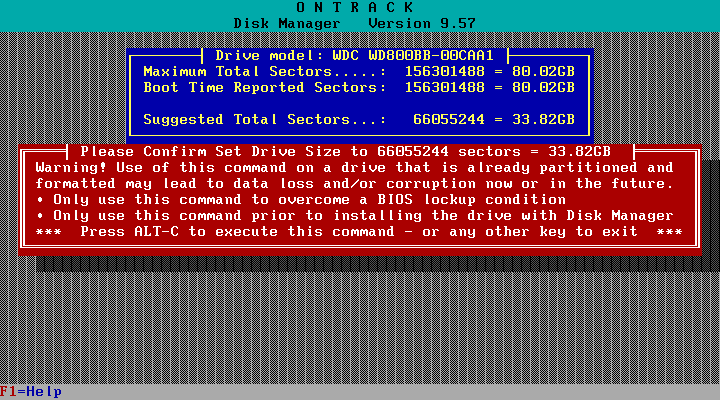 It works! (I have another problem now, probably with MBR or MPT but the HDD is well detected by the BIOS) 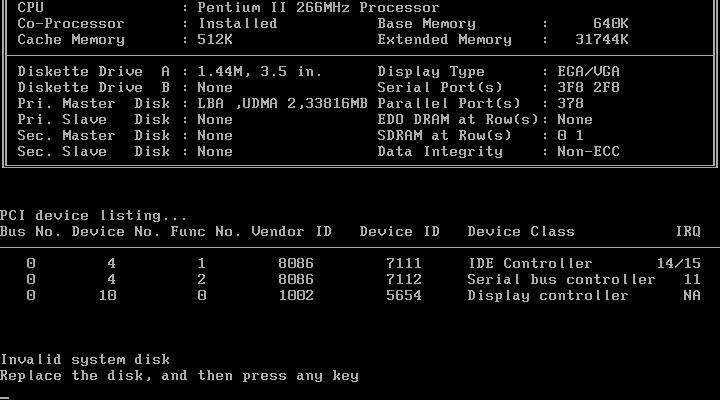 With the upgraded BIOS, the asker’s computer seems to have locked up in a pretty curious moment. This gave me an idea what might be the cause, so I decided to take a stab at disassembling the BIOS to confirm it.

The following is an annotated disassembly of a fragment of the decompressed BIOS, version 1009, at real mode address E000:8B09. This code executes when printing the device listing right before handing control to the bootloader.

The above code takes the logical disk geometry as detected or configured in the BIOS and multiplies the coordinates together to obtain a count of sectors times 4. That value is then divided by 7812 (almost exactly the number of sectors in one SI megabyte) to obtain the number of megabytes. The division instruction at E000:8B15 takes the dividend from the 32-bit register pair DX:AX (where the multiplication instruction put it) and returns the quotient in the 16-bit register AX. If the quotient happens not to fit within 16 bits, the divide instruction triggers a #DE (divide error) exception, more commonly known for being triggered when attempting to divide by zero. Since the BIOS had not installed a meaningful divide error handler by that moment, the boot process hangs.

A pretty silly issue. But it suggests two avenues to remedy, neither requiring a disk overlay:

If installation is your issue, OnTrack Disk Manager 9.57 is available as a bootable disk image. You could just boot your Pentium 2 off its install disk and let it do the rest.

Finally, if you've got a suitable Windows (eg. one of the Windows XP testing images that used to be offered on modern.ie before Microsoft EOLed earlier versions of Internet Explorer), you could mount a floppy drive or disk image as A: in a PC emulator/virtual machine manager and create an install disk that way... assuming that Wine doesn't offer a translation of the relevant APIs and none of the relevant disk image generators are DOS EXEs that'll work in something like DOSBox-X.

9
How to determine BIOS-provided (INT 13h) hard disk geometry, and how to fix the MBR partition table to agree with it?

13
How can a ST-412 MFM hard drive be integrated with a modern PC?
4
What to do about "Invalid media type"
10
Cannot boot from a Compact Flash card
11
How can I edit CMOS hard drive geometry settings on a 1991 PC?
7
How can I tell if my old PC supports > 137 GB hard drives?
7
Booting from SD card on a Compaq LTE 4/75 – DOS 6 works, Windows 95 doesn't
13
Is there a way to trick my 386SX laptop into thinking there's a floppy drive installed?
9
How to determine BIOS-provided (INT 13h) hard disk geometry, and how to fix the MBR partition table to agree with it?