Why does NumLock exist?

My keyboard has over a hundred keys on it. But there's one labelled NumLock. Pressing it turns the numeric keypad into a duplicate of the dedicated arrow keys just left of it. This doesn't seem useful to me...

Does anybody know how this strange state of affires came about? Was there a time in history when NumLock actually did something useful? I get the feeling it must be some kind of kludgy workaround for some historical happenstance that has long since passed...

My keyboard has over a hundred keys on it. But there's one labelled "NumLock".

Simply because the dedicated cursor keys were not there to begin with. As seen here with the original PC Model F Keyboard delivered with the PC-XT:

Or more exactly, what we know now as numeric keypad was the cursor keys. Using them as numeric keyboard was a secondary function to be activated with NUM-LOCK. Doing so was considered an optional thing for accountants.

It wasn't until the Model M Keyboard for the PC-AT, in 1986, that IBM added dedicated cursor keys:

Pressing it turns a perfectly good numeric keypad into a superfluous duplicate of the dedicated arrow keys just a few millimeters to the side of it.

To keep compatible with existing software the 'Numeric' Pad was designed exactly like before, except that NUM-LOCK is now engaged by default(*1). The NUM-LOCK LED, usually located in the upper left, should show this. Doing allowed the use of cursor keys and num-pad at the same time without switching.

So when you are now pressing NUM-LOCK, it's disengaged, reverting the key-pad back to its original function, which is exactly the cursor keys.

While NUM-LOCK now may seem useless, it could not be dropped, as some software used it to switch between certain modes. So go at it like with every other key you don't need: ignore it :))

*1 - At least during the 1990s most BIOS had a setup item to select whether the keyboard is to be initialized with NUM_LOCK on or off - on usually being the default selection.

The NumLock key still exists because some people like the numeric block to act as numbers and others prefer them to have their classic cursor-motion capability. This capability offers an intuitive way to handle the cursor, one that many of us spent years using. Plus many of the cursor control blocks lack a number of the motion commands offered by the numeric keypad.

Some computer and keyboard manufacturers are doing away with NumLock, though. I recently bought an HP desktop that has a numeric keypad, but no NumLock key. Nor was there a function key combo I could find which would allow the numeric keypad to act the way "it should." Fortunately one of the keys became unreliable (w), allowing me to go to Best Buy and get an actual $30 keyboard that not only has NumLock, but the classic "clicky" feel and sound.

Way back in 1978 Digital Equipment Corporation (DEC) introduced the VT100 terminal. This was a market leader at the time and design decisions were to influence the subsequent history of all terminals, keyboards and terminal emulators. The keyboard layout shows many features of subsequent keyboards, though in slightly different locations: 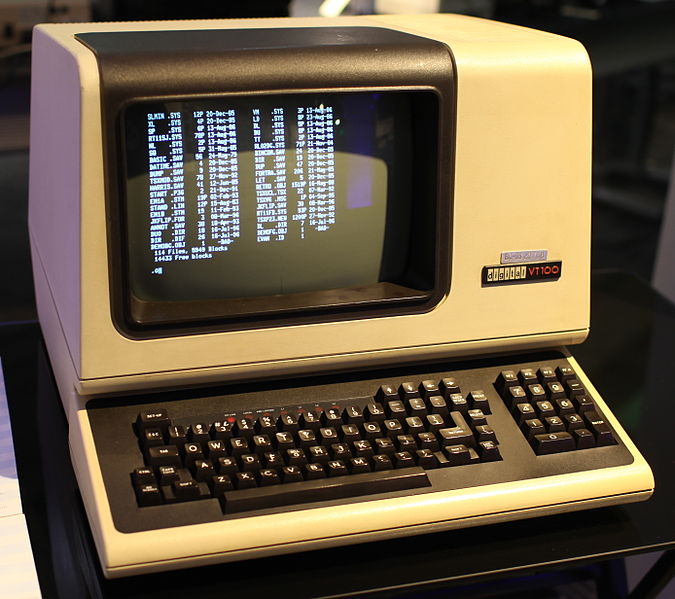 The keypad could operate in two modes. As a numeric keypad it could be used for rapid data entry. but DEC published plastic overlays that allowed the keys to be redefined, most commonly as the EDT keypad:

At this date normal terminals did not come with mice or graphics pads!

When the VT220 was released in 1982, significant thought went into producing a standard keyboard that was suitable for all users. The result was the LK201:

Meanwhile IBM had been starting the PC revolution from 1981, but using its model F keyboard which many users compared unfavourably to the larger DEC keyboard ("toy" and "cramped" for example). DEC maintained strict patent and copyright on the LK201 to try and restrict the market in third party VT220 (and later) clones. IBM took the ideas from the LK201 and used them to produce the model M keyboard in 1985. The keypad was redesigned since it didn't have to comply with EDT (and the subsequent EVE) editor layout. The number of function keys was reduced from 20 to the current 12. A dedicated escape key was added and over the years the number of bottom row buttons has increased. However the lineage is obvious.

Which brings us back to the NumLck issue. It was essential in the pre-mouse days of the early 1980s and 1970s. Keyboards were expensive, between 5 and 10 times the cash cost (not allowing for inflation) of a modern basic keyboard. Anything that could allow keys to "double up" saved significant amounts of money.

Raffzahn gave a fine, complete answer. Don't mean to compete with any fact or conclusion drawn in it.

Consider the layout of the arrow keys in the first pic. Well, second too, of course, but the earlier keyboard being more directly to the point as it is earlier in the evolution. Why would the keys be placed as so, up arrow the "8" and so on? Why not "1-2-3-5" (maybe some time traveller influencing something trivial for some fun) or "decimal point-1-3-5" to get a diamond shape that kinda feels pretty natural while the current "one over three" button array does not?

Not a technical expert here so no wonderful list of cool older computers from outside the micro-world will follow. But I did have plenty of experience using my employer's software grafting something of a POS onto a warehouse program and so using equipment in a mixed typing environment, one of numbers and letters with the numbers being a bit more important. Probably a mainframe in the back end as people called it so, but it could have been a mini-computer for all I know.

In any case, the "numberpad" was on the left side of the keyboard, not a physical numberpad, but sharing the QWERTY letter keys. And it was laid out the way the keys are on that first keyboard's (yes, and all 400 billion of them since) physical numberpad.

Anyone who used both navigation AND numberpad aspects, like me, was very used to this layout. It WAS awkward in that most were no more left-handed than I, and I imagine that's part of how it ended up on the right-hand side, not the left (piles of function keys being common on the left being a bigger element in that choice, I further imagine). But that layout, both of numbers and of navigation keys, might have been something they would have thought important to preserve as there was only a shift of hand with the burned in pattern the same.

IBM, in particular, was always a "you get precisely what you pay for... and not an jot more... even when you didn't realize how closely they could slice against that bone" kind of company. Putting extra physical keys on a keyboard costs incrementally more, the same way $5 more for the gas tank of a Ford Pinto would save lives but making a million of them that's $5 million and maybe the lawsuits would come to less so... They keys we have today, versus the 88 they had to start with, came only grudgingly.

Therefore I cannot say as a fact they thought deep in their bones that any numberpad put on the keyboard MUST, just MUST, include navigation ability as well to properly care for their incumbent computer users rather than just being cheap &%#$)'s who were HUGELY grudgingly seeing themselves forced to provide for a numberpad. But I will say it seems a very NATURAL evolutionary move. They were providing a numberpad, grudgingly or not, so why not be brilliant and bring navigation into the game? (Outside just Enter and TAB, that is.)

And one still needed to have a function-style key to do the switching back and forth. Probably was either innovative to have a dedicated key for that guessing it wouldn't be needed too frequently or perhaps just a techspec timeline running out and someone pointing out software folks were owning the function keys there were so maybe they couldn't really use them for it without trouble.

(And believe it or not, ScrollLock was useful once upon a time, and I cry myself to sleep (metaphorically) about having no modern PauseBreak functionality.)

So I will say, for me the preponderance of guess-idence says that's what happened. And it wasn't enough so we got the modern one-over-three set of arrow keys. And the "Home-End-PageUp-PageDown" set as well.

If I am correct, that would be about the lowest level explanation of why they came into existence TOGETHER, not separately and later combined. (And usability would later separate them.) And which I think the poster would be happy to know of as a small point to go with Raffzahn's answer.

Slightly aside, that is also how some of the shortcuts we usually still have access to in software came into being as well. I loved WordStar when entered the PC world (and Locascript in the CP/M world... what that program got out of a dot matrix printer vs. what DOS got for years was incredible). It used a shortcut convention I do not know the name of, but that convention either came from the mainframe/minicomputer world or was powerfully influenced by it because it fit perfectly everything we had to do at that job. I loved WordStar for its functionality and the user's detailed control not for its chosen shortcut convention, but that was nice too. (And yes, my "user's detailed control" was, for 99.99% of people, "I hate it, it doesn't DO anything for you, you have to do every little thing." But you know, potato-pah-tah-toh.) Connection being the left side of the keyboard being used a lot of ways, not so much the right side, though it was also.

So I think someone with more knowledge or technical experience from the time could regress the layout and need for switching even further.

143
Why is the keyboard and cellphone / telephone numbers in a different order?

15
Why did tactile-feedback keyboards lose popularity?
28
Why separate cursor keys?
23
Why does PAUSE key have a long make code and no break code?
70
Why was the return key symbol ↵ drawn differently from the motion of a CR-LF?
143
Why is the keyboard and cellphone / telephone numbers in a different order?
8
Why do keyboards with a NumPad repeat the numbers?
26
Why does DOS ask for the current date and time upon booting?
16
Why are older Shift keys shaped the way they are?
10
When does an IBM-compatible PC keyboard controller dequeue scancodes?