Does any computer resemble the model taught in UK secondary education?

The registers are faster to access than main memory.

Execution can be divided into three phases: fetch, decode and execute.

There is an ALU that handles arithmetical, bitwise and comparison operations. Memory accesses involve three buses:

The MAR and MBR are buffers for the address bus and data bus respectively: to perform a memory write, the MAR and MBR are set, then their contents are sent over their respective buses, along with a "please write to memory" signal on the control bus. To perform a memory read, the MAR is set, then sent over the address bus with a "please read from memory" on the control bus, and the signals from the data bus are written to the MBR.

Being an ignorant youth, I've never come across a computer processor I know to be designed this way. Searching for the terminology turned up the IBM 1620, which has an MBR/MDR distinction and – as far as I can tell – a similar memory bus design. (Unfortunately, it lacks the general-purpose registers, and the clearly-defined ALU.) I haven't found much else online; the search results are so swamped with teaching and revision resources that my usual approach fails.

Is there a computer that works like this? If not, which real-life machines are closest to this model?

1: Though you don't always lose marks for writing about pipelining.

Erm, next to all?

FETCH-DECODE-EXECUTE is the basic execution cycle for each and every digital CPU. No matter if a Turing Machine or a Pentium. I suspect the question is rather about the abstract model used in those courses.

As a model-CPU it's simplified to the minimum viable number of elements, but with added items to simplify teaching as well. It forgoes of course any optimiztion that a real world CPU would have right away, like splitting MBR and MDR or only copy needed data items (instruction or address) into registers.

What may add confusion is that it includes registers that are usually not user visible like MAR or MBR. This is done so the internal operation, below the user model, are to be understood - but without going into real implementation (i.e. gates).

If not, which real-life machines are closest to this model?

As said, next to all (simple, synchronous) CPUs work like that.

Insert About Teaching vs. Engineering

The key word is 'like that', as what you see in this course is an idealized model tailored for teaching. This means there are not only parts left out or simplified, but also steps/workings/parts added to ease teaching. These elements may not be found in the same way, or at all, in real implementations.

Remember: The target of teaching is not to build something, but to make pupils understand the principles so the can (hopefully) later create their own design.

For example within the FETCH cycle video shows MBR and CIR being hosted in parallel but feed in sequence. This is a simplification, and in fact rather useless, especially in this combination. In a real world the data fetched get put right away into the CIR, as the sequencer knows it's fetching an instruction. In turn when a fetch is not about instruction, but data, the byte read will get moved direct into the MDR.

In fact, the very reason of having two names for the same register, MBR and MDR, shows already that there might be more to it in real life. It's perfect to 'answer' questions about buffering input, buffering output and holding data for operations. In reality MBR and MDR are often different registers

For teaching it's good to have a streamlined understanding of FETCH where data always going first into. It simplifies the understanding of that process by using always the same straight mechanic. Students may later discover that splitting the load up according to state will improve upon. But that's after understanding the simplified workings first.

A similar liberty includes that a single read fetches instruction and address(es) that go with them to later fit a single register (MDR/CIR) holding all of that (and the control unit later on again). This requires a structure long words and short addresses that hasn't been seen since very early machines (e.g. Zuse, Manchester Mark 1) - and even these machines did not store the same value multiple times. They had way better use for their slim number of logic elements than useless duplication.

Long story short: Teaching models are not only different from reality to reduce complexity, but as well expand to improve teaching (*1).

But let's take a real world CPU and look for where to find the elements. Hanson's diagram of the 6502 seems like a good start: 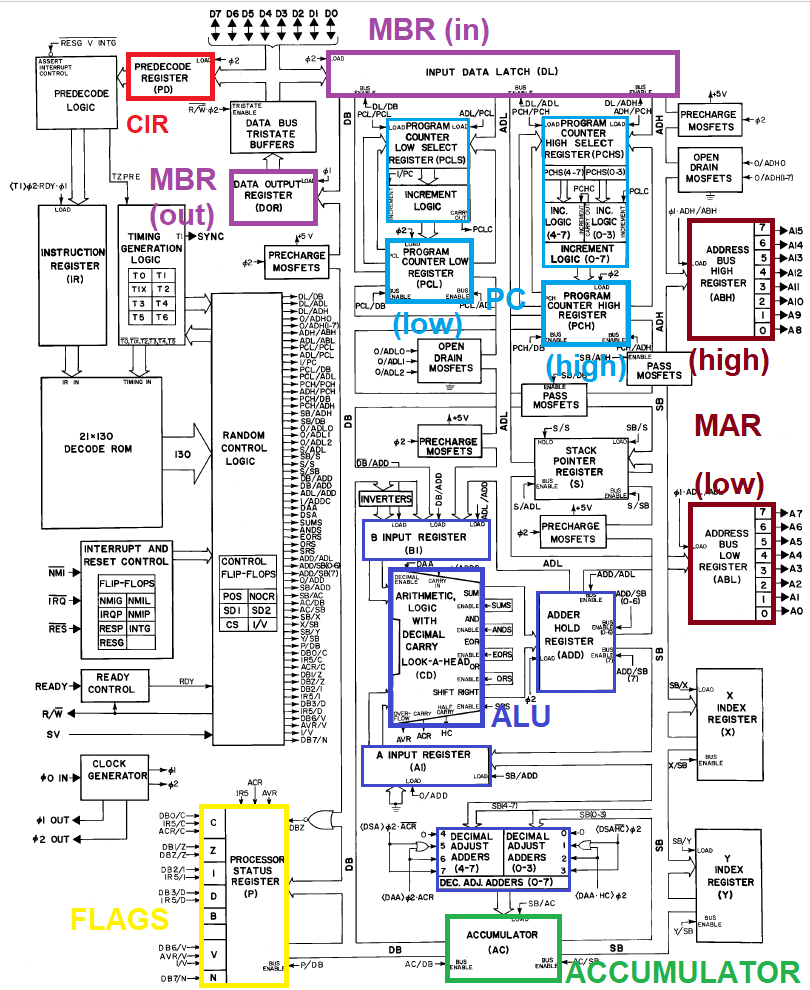 (Taken from the cleaned up version on his site)

The Registers of you school CPU are quite visible:

Due being a strict 8 bit CPU, the 6502 needs to organize 16 bit parts (PC, MAR) as two 8 bit units. For the context of teaching they are one register. Likewise are secondary parts of registers, like the PC incrementer or the data hold registers for the ALU. These are marked here with thin lines.

Left unmarked are what the 6502 provides over such a minimal model:

The remaining boxes represent items that are usually left out of such models to reduce complexity.

Regarding the often cited 'Pipelining' of the 6502: There is none.

At least not in the sense of today's understanding of a pipeline with instructions going thru various stages of execution. It's more like a expedited read ahead (hence the name prefetch register) issued while the last execution cycle is still performed. This works as for many instructions (think of ADD), the last cycle is an internal to perform the operation, thus the bus is free to do a read ahead.

Removing this from the CPU wouldn't change much of the CPU, except making many instructions one clock slower. It's an optimisation that comes (almost) for free by arranging the data pathes the right way.

The same can be done with next to any other CPU. Including the most recent units - although, it might be hard to pin these basic elements within the ocean of optimization :))

*1 - And to support quick demise/answer of questions of students to advanced for that course.

Microchip PIC family of microcontrollers very closely resembles this model. They are widely used in embedded systems, you probably have several in your home. A block diagram of the architecture can be found in e.g. PIC16F84 datasheet and more information on the core in a separate document. 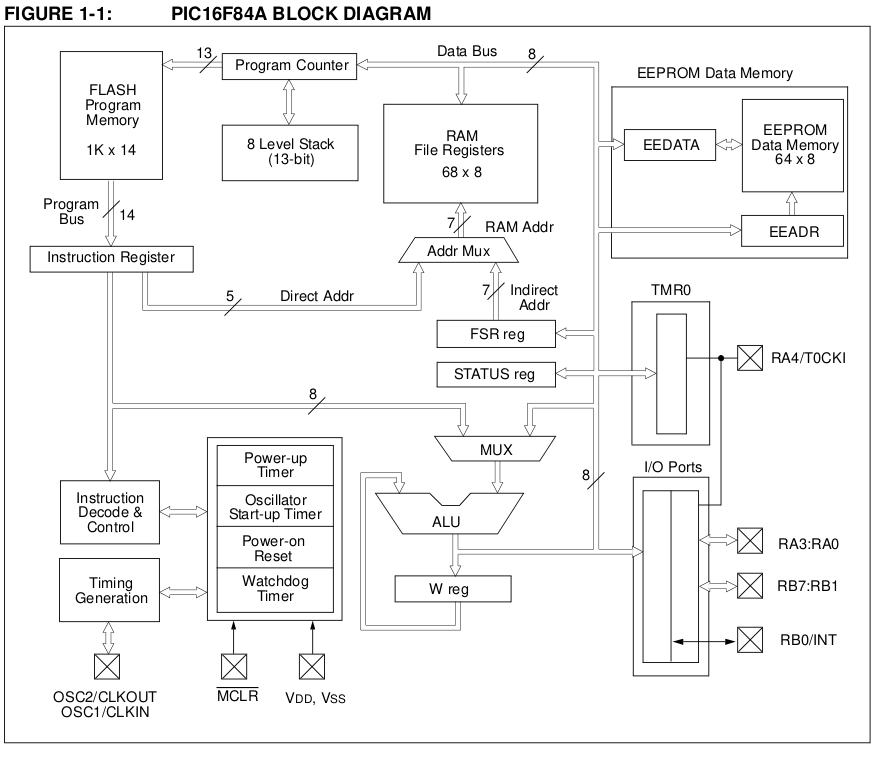 The processor has at least one general-purpose register, usable as a source for arithmetic operations, and a source or target for MOV operations

PICs have exactly one general-purpose register, the W register.

Accumulator, where the result of all ALU operations is stored.

The registers are faster to access than main memory.

Execution can be divided into three phases: fetch, decode and execute.

There is an ALU that handles arithmetical, bitwise and comparison operations.

Yes, though control signals haven't been marked on the block diagram.

A clock is involved in some part of the processor's execution.

The addressable memory is RAM (think core or MOSFET, not drum).

There is addressable RAM and flash memory.

No pipelining1 or branch delay slots. An instruction is only executed once the previous instruction has finished.

The instruction fetches from flash are pipelined by a single stage (the fetch is started during previous instruction execution). There are no branch delay slots, but branches take 2 instruction cycles (8 clock cycles).

RAM accesses may be cached.

There is a SLEEP instruction, which can be woken from by hardware pins.

It is an extremely common approach for discrete CPUs (CPUs implemented with discrete logic elements, both with integrated circuits and previous technologies), and also in early single-chip CPUs.

(There are a lot more similar architectures)

So you can see variations of this were widespread, and from a teaching perspective, it makes sense to distill common elements and present those, as in your textbooks.

The old IBM1130 comes close. Here's the console, which displays much of the CPU state:

INSTRUCTION ADDRESS is your PC.

STORAGE ADDRESS, STORAGE BUFFER, and ACCUMULATOR should be obvious.

It has an extra ARITHMETIC FACTOR separate from the STORAGE BUFFER. I believe this is because core memory must be rewritten after each read, while multiply and divide involve multiple additions and subtractions with modified operands, so keeping these separate is handy.

The ACCUMULATOR EXTENSION supports multiple precision arithmetic, an added feature beyond your model.

13
How were Zuse Z22 Instructions Encoded?

99
Were there 8086 coprocessors other than the 8087?
13
How did 2-chip CPUs work?
16
Has there ever been a instruction set architecture that did not require instruction decoding at all?
48
Why does the 80486 take longer to execute simple instructions than complex ones?
1
How do multi-byte instructions work?
7
What was the first microprocessor to overlap loads with ALU ops?
7
What is the relation between external clock and internal states in the 68000?