How did the IBM 5153 color display detect and modify the signal to make low-intensity yellow into "brown"?

The IBM CGA video card generated 16 colours indicated via four binary TTL signals: R, G, B and I (red, green, blue and intensity). This was not an entirely linear transformation: in particular, RGBI=1100, or "low-intensity yellow" appeared not dark yellow but brown¹; this was done by reducing the amplitude of the green channel as sent to the picture tube for this particular colour (i.e., combination of bits).

My understanding is that the analogue voltage levels eventually sent to the picture tube for that particular combination were different from those for, e.g., RGBI=1010 or RGBI=0110.

¹ Yes, I know that yellow and brown are the same colour.

Dr. H. Holden describes the general workings of the IBM 5153 colour conversion circuit (which converts the digital RGBI signals to analogue RGB levels) on pages 21-24 of his document "Fitting an EGA Card to an IBM 5155". The following schematics are taken from that document; I'm not sure if they are exactly the circuits in the IBM 5153, but they do an excellent job of giving the general idea.

There's a detection circuit that looks roughly like the following, connecting the detector output to ground when RGBI=1100 (low-intensity yellow, or "brown" as I'll call it here) is detected. Otherwise the detector output is left floating (unconnected to anything).

This signal is then fed into the main colour conversion circuitry through a resistor. If "brown" is not detected, this has no effect on the analogue green level (it's effectively not connected to anything). However, when "brown" is detected this resistor is now connected to ground and becomes part of the voltage divider generating the analogue green level, pulling it about 33% lower than it would be without this signal. 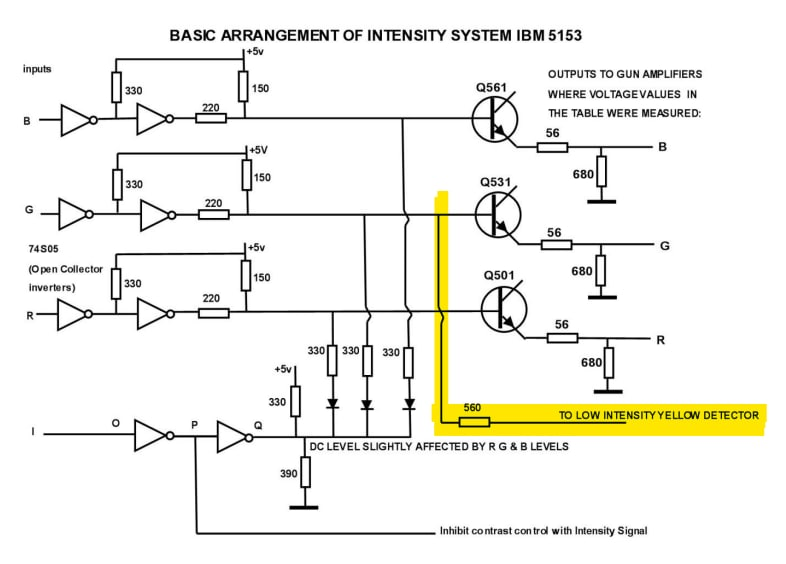 This can be seen in the measured outputs of this circuit (measured at the B, G and R nodes at the right-hand side of the schematic above): 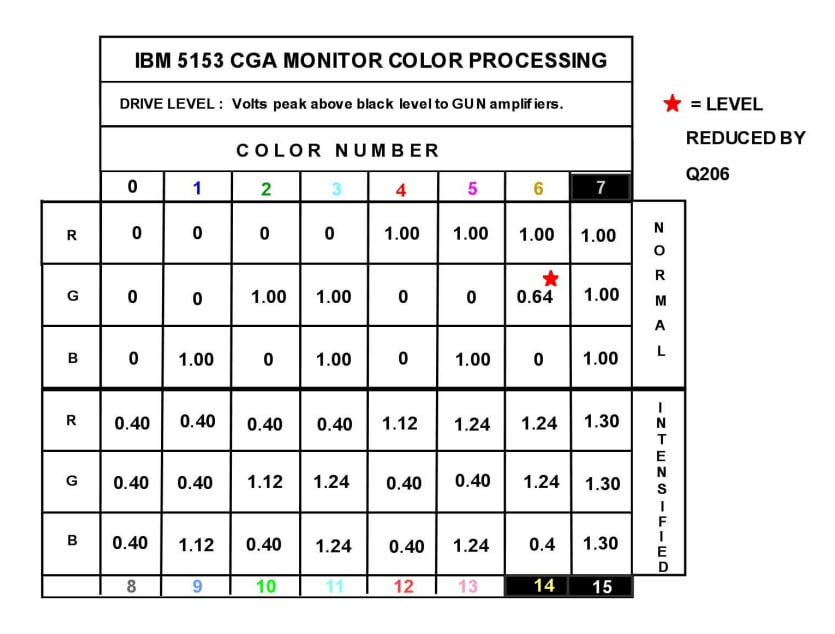 If you're trying to emulate this circuit, it's worth noting that when the intensity bit is set the R, G and B drive levels increase as more bits are turned on. E.g., with RGBI=1001, R=1.12 V, but with RGBI=1101, R=1.24 V and with RGBI=1111, R=1.30 V. It's not clear if this is an intended effect of the circuit design, but it does change the colours as compared to what you'd see from other methods of conversion.

The "brown adjustment" here and the "intense channel level" changes above are generally not replicated in other systems. Neither the CGA CVBS (composite) output nor the IBM 5154 (EGA) monitor when displaying CGA input treat the colours in quite the same way. (The 5154 brown is less bright than the 5153 brown, for example.) And the "standard" RGB values used by full-colour systems trying to "emulate" CGA are also different from the 5153 display.

The circuitry does exactly what you described, it detects the bit pattern for that specific color that would be "dark yellow", and when the bit pattern matches, an extra transistor is turned on to reduce green intensity.

In general, the digital R/G/B signals are used to add voltage to respective R/G/B analog signal, and the digital intensity signal adds to all three RGB channels.

More specifically, the digital RGBI input circuitry uses 74S05 inverting digital logic buffers with open-collector output to receive and buffer the four digital color signals. Because the buffers are inverting, the signals are inverted twice to end up back with a non-inverted signal that can be used to drive resistor networks, in order to convert the digital signals to analog levels for the transistors that drive the analog RGB signal levels.

So, because you have all the buffered digital RGBI signals, and their inverted complements available through inverters, and your inverters have open-collector outputs, you can combine the inverter output signals to make a wired-AND circuit.

The wired-AND circuit uses the non-inverted and inverted RGBI signals in such a way, that only one combination of them allows the output of "dark yellow" bit pattern detecting inverter to go high and modify green to darker, otherwise, the output stays low and green is not modified.

The logic is as follows:

So the only combination that allows the output to become is high, is low on blue and intensity, and high on red and green, RGBI = 1100, which would be dark yellow.

The 5153 does colour generation by adding voltages:

This produces 7 colours plus black.

This lifts all 7 colours to 'full' intensity. Plus, since a black lifted by 0.33V is no longer Black, an additional dark grey.

So far all fine within the straight RGB model, except, humans do like to see brown as well, we're kind of made for it (*1). So adding brown would help with a balanced palette. Except, it can not be described by simple two level (binary) RGB, as it needs three different activity levels. Having intensity is no help either, as it shifts all levels.

The solution picked was to turn the basic Yellow, binary 110, into a brown by driving green by 0.33V less. This is detected by a clever analogue circuit made from inverters, which simply do not add the full 0.66V to green in case of basic 'Yellow' (IRGB: 0/1/1/0). This is nicely shown on page 3 of SAMS 5153 VDU schematics (page 3 of this PDF). The inverter logic is on the top right of the page, while the colour voltage adders are below.

Of course, turning Yellow into Brown would have made Light Yellow an odd name for the only yellow left, so it got renaimed to simply yellow - which also is the reason why Yellow is much brighter than the other 'basic' colours.

1 - The area between red and green is what our eyes are most sensitive, so not having brown will be a serious issue for a colour display. The same reason why Amber and Green screens are the most easy to read as mentioned here and https://retrocomputing.stackexchange.com/a/7694/6659

Same reason why blue is often encoded with less bandwidth (like 3-3-2) - we simply don't see the difference.

Not the answer you're looking for? Browse other questions tagged cga or ask your own question.

10
What were other colors beside green and amber for monochrome monitors?
11
Was it ever possible to access the full EGA color space in 200-line modes?
13
Why green phosphor instead of amber?

8
Why did CGA RGBI output leave DAC to the monitor?
3
Is the IBM 5153 color display compatible with the Tandy 1000 16 color modes?