Why, usually, does 0 mean success in process return status codes?

Along all the years I've known about this "0 means success" idiom, I've asked people if they have any clue where it came from and the best answer was PURE speculation — admittedly — from the respondent: it means "nothing to report."

OK, that speculation makes sense to me. And a LOT of the origin of terms people ask questions about here in Retro have answers like "it was borrowed / carried over from non-computing practice." In this case, "nothing to report" is a commonly heard phrase in a military context and considering the early focus of modern computing.

Here is a Multics document on "Standard Error Handling Practice" from March 1969.

Scroll down to the second page and find "by convention, zero is the code for normal completion". 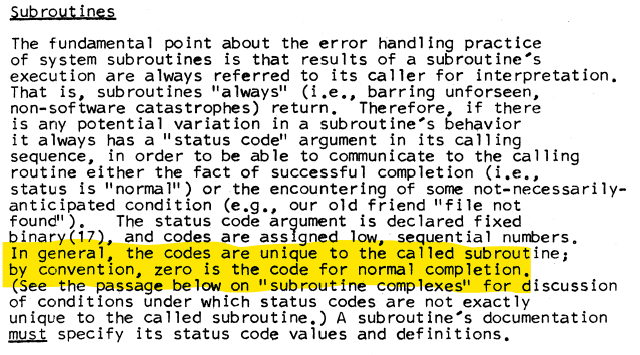 That indicates to me that by the time of Multics' it was already common practice in computing that 0 indicated success/normal for subroutines. In Multics of course there was a close affinity between the way subroutines worked and the way processes worked - so it was natural that processes used the same mechanism. From there: UNIX.

By the way, consider the Multics "shell" - leveraging the remarkable Multics' property that you could call any entry point in any executable file in the entire file system as a subroutine ꭝ (if you had permissions to it, of course) - it simply called all "commands" - system or user-written - with a normal subroutine call in machine language, and the dynamic linker handled the rest. That means that in Multics the return value from such a subroutine call became the return value that a command would check (and then it would call a system subroutine to correctly handle the failure from the command-line POV). From the same document:

The history of using 0 for success started a long time ago - most likely earlier than Multics. Though it probably wasn't the only such convention. If you want an opinion my guess is that, based on the experiences of people writing programs in "the early days" they recognized that there were frequently multiple reasons a given subroutine/system call/command could fail, and some of those different reasons might be interesting to the caller. (E.g., "device not ready" vs "no permission to use device".) On the other hand, there probably weren't a bunch of compelling examples for having multiple success codes on an API. And also they knew that the easiest, cheapest, simplest method of returning a result from a subroutine was just to leave a value in a particular distinguished register - that was a looooong time practice. And with that in mind you then look at the possibilities of singling out one particular in-band value of an integer, with a mind to making it simple and cheap to test for (by the caller) and maybe also simple and cheap to establish (by the callee) ... and 0 stands out.

ꭝ BTW, how do you make any subroutine into an entry point of an executable? Simple! Multics allowed files to have multiple names and all you needed to do was add, to your file, the name of each subroutine you wanted to allow the dynamic linker to find. Especially for the system commands it was common to find an executable file with several, or a dozen, extra names attached to it - each one being a subroutine in that binary, and each one callable from the command line. The directory list command would list all the names of each file of course (which would look strange to modern eyes). It's a bit more convenient for the programmer than the modern technique of hard-linking the same file from multiple names and then having the code figure out which command was wanted by inspecting argv[0].

Zero is set apart from any other integer by the way ALUs work. On low level it is thus of advantage to use zero as return code for success, as it's the most easy to be detected. With that being said, it comes natural to extend this to process/program return codes.

Way Back in Time and Close to Hardware

Much meaning can be put in hindsight onto return codes, but such based on integers inherently benefit from integers being treated as first class member by next to all CPU architectures. This includes almost always a way for taking execution depending on an integer being zero or non zero. Either by offering a value based branch, or a fast, low cost test followed by a branch.

At that point its helpful to keep in mind, that error handling is a burden slowing down execution. A substantial one, considering that programs are all about calling functions - within and from the OS.

By assigning zero as default value for success this advantage can be used for cheap (*1) error/non-error detection, reducing error handling cost to a possible minimum.

Of course that argument might work either way, but when looking at ordinary execution, then functions will usually will have have to be way more differentiated why they failed than why they succeeded. Reserving one return code for success and MAX_INT-1 for error numbers does again simplify error handling. Of course a differentiated error handling with multiple fields and structure past a simple number will beat all of that - but also be an overkill in 99.999% of all cases.

And then there was C and Unix

While (early) mainframe OS used dedicated mechanics for success and return/error information, the designers of Unix were all about simplifying to the absolute minimum. Using zero to distinguish the most notable case, yields the best performance.

C/Unix was not only using the advantage of integers within programs (*2), but as well extended it to the shell. After all, a programs main() is also just a function, so why bother to convert this in any way but simply forwarding that value to shell?

The C Programming Language Second Edition mentioned this as general rule on p.27:

What goes for integers works of course as well with signed integers. Those divide all none zero values in two (almost) equal sized sets, marked by the sign - a feature as easy to detect as like zero and as well privileged by many architectures.

By using signed integers Now not only reasons for being non successful, but as well reasons for success can be reportet. C does make as well use thereof (*3).

Two Halves of a Shell

Despite process exit codes usually seen as unsigned integers, the sign principle got as well extended to shell use by reserving values of of 128 and above, like for the return value of a sub-process.

One Exit Code to Rule Them All

In batch programming 'success' is one most important 'message', as it's the one to be detected to carry on with whatever is next. Think of a very classic use case like processing data from a tape. Such a program may return beside the basic

Depending on the environment the later may require the request of operator assistance to mount the right tape, a follow up tape or search an archive. All things the data process can and should not do on it's own, as it's heavy dependent on customer installation what the right handling will be.

Again the privilege of zero being special for all integer makes batch writing consistent, easy to do and most important, easy to read. Anyone who has worked in a (classic) data center will know how important a consistent structure of batch files is.

Zero is privileged as return value by hardware, assigning it to the most common case comes naturally

*1 - In a sense of compact code and fast execution.

*3 - Of course it wouldn't be C if it doesn't get complicated at that point, for example with read() now only reserving -1 for some error and reporting the real error number in errno, adding several pitfalls in non trivial programs :)

*4 - In some ways the usage of signed integers and the resulting easy detection of positive and negative values and zero is much like the shell of a Bivalvia: Two valves connected by a hinge :))

A process, or a system call, can have multiple outcomes, typically more than two. There could be several "successful" outcomes, and several "unsuccessful" ones.

When these outcomes are identified by numbers, choosing negative numbers to mean "unsuccessful", and non-negative numbers to mean "successful" is a fairly mnemonic choice, given the associated meanings of the words "positive" and "negative" in most fields (except, perhaps, some medical contexts where "negative" is often the desired result of a test).

With these conventions, finding out whether a result of an operation was favorable or unfavorable overall, on a machine with two's complement arithmetic would involve just one instruction, checking for the sign of the status value. Thus, 0 is not just "nothing to report", but rather, "successful, nothing more to report".

Not an answer as to 'first', but since we're talking a lot about Unix, it might be useful to point out that Unix had at least 3 'error' conventions. I talk here about PDP-11 Unix.

So in Unix, the kernel only has one 'success' reason for termination - the process called 'exit', which is coded as zero (and there was no core dump in this case, so that flag is zero too). That leaves 8 bits for the process use.

Second-edition Unix man pages for the shell say nothing about the shell taking any particular action on zero/non-zero for the actual exit status; only about printing messages for the non-exit cases. I conclude there was not yet a strong convention in this regard. Perhaps it only becomes important when 'programmable' shells appear - maybe Programmer's Workbench Unix?

Many CPUs have a "flags" register that contains a number of bits automatically set or reset according to the last ALU or load operation.

Commonly one of those bits is often a "Z" bit which is automatically set when a value is 0.

CPUs also typically have a "compare" instruction that does a subtraction, discards the result, but lets the flags stand.

However, if you want to test for zero, the compare is unnecessary since the Z bit will be set automatically from the last operation that loaded a zero value.

So if you need 2 values to decide between "error" and "not-error", then zero and non-zero are convenient because save an instruction/a couple cycles (valuable things in late 60's) on each system call.

I could be wrong ... I haven't really looked at this in depth yet, but just skimming over the Multics Processor Manual seems to suggest at least one of the CPUs Multics ran on worked the same way - looking at the lda instruction (page 32) for example, mentions something about an "indicator" being set if the value is 0, I believe. So the tnz (transfer on non-zero) instruction could be used immediately after the call to jump somewhere if there was a problem, without a cmpa instruction first.

36
How did Multics make library calls available as shell commands?
6
Is there a CPU ISA preferring a test for the value of one over testing for zero?