Can you load machine code programs for cassette tape on a TRS-80 model 1 level 1?

I'm trying out TRS-80 model I/III emulators. I know there was Level 1 and Level 2. I think this refers both to the ROM and the BASIC on the model I. Level 2 ROMs were a common upgrade to the model I and I think were standard on the model III.

The information I can find for loading software from cassette tape on the Model 1 is to use the CLOAD command to load BASIC programs and the SYSTEM command to load machine code programs.

But the SYSTEM command is not recognized in Level 1. Does this mean there was no way to load machine code software and that you could only use BASIC software on an original Model 1 Level 1?

Or is there another way to load them that I haven't found?

It is possible to load and run machine language programs on a Level I TRS-80 Model I. This was done by various programs, including the monitor program T-BUG, the editor/assembler program EDTASM, and the subLOGIC T80-FS1 flight simulator: 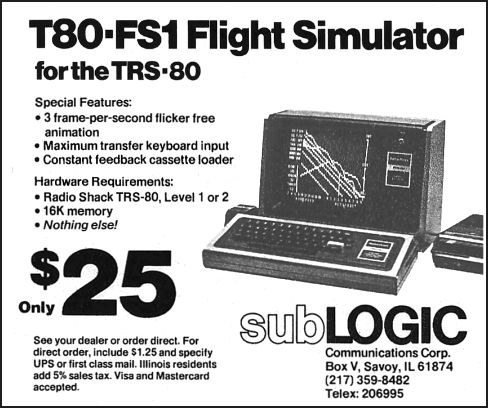 The way to do this was with the CLOAD command, as explained in the T-BUG manual, the EDTASM manual, and the T80-FS1 manual. EDTASM had a special SYSTEM tape that, under Level I, was loaded first and then read in the editor/assembler tape (this preloader strategy was also used by T80-FS1).

How was this implemented? Looking at the disassembled Level I BASIC ROM, CLOAD simply loads a block of bytes into memory, starting and ending at specified addresses. Loading and running machine-language programs is then possible by reading a block of bytes which overwrites the return address which was stored on the stack (at address 41FE—see [1], [2], p. 9) when the cassette-loading routine was called, so that returning from the routine executes the just-loaded machine code.

No, Level 1 BASIC is a Tiny-BASIC enhanced to support the block graphics and loading from/saving to tape. Tape support was rather limited, as programs were literally memory dumps, no management or further organization. It even seems as if the existing primitive functions for tape files have only been added as afterthought.

Unlike next to any Tiny BASIC, Level 1 BASIC does not feature functionality to interact with machine language, no PEEK, no POKE, not even a basic USR() function which was almost mandated by Tiny BASIC to extend it's usability. So even if there would have been some way to load a machine program, it would not have any means to execute it.

7
Did Radio Shack initially attempt to get a monopoly on commercial software for the TRS-80 Model I?
6
Which DOS for a TRS-80 Model 4P?
15
Using a modern PC or other digital audio recording device as a cassette recorder replacement
10
How much control of TRS-80 Model III disk drives was possible from its Cassette (ROM) BASIC?
15
What are the "ports" used via IN/OUT, vs. the PEEK/POKE address space?
3
Do TRS-80 Model I and Model III load and execute /CMD files using specific memory addresses?
3
Loading a Tandy CoCo or a Dragon 32 machine code program from cassette with multiple "name blocks"
10
Understanding the DMK disk image file format used by TRS-80 emulators
3
Interpreting TRS-80 model 1/2 tape cassette audio