Ask Question
Asked 2 months ago
Modified 2 months ago
Viewed 715 times
9
Closed. This question needs to be more focused. It is not currently accepting answers.

Got myself a bunch of 74LS181, because they were cheap and they have been used in the VAX 11/780. And now I made myself a little tester breadboard where I am trying to figure this out in practice. My head is spinning from all this active low and high and open collector (A=B), etc.

I wonder if the VAX or some PDP-8 might have used this ALU in active low mode? Then they would have to have all the registers in active low also, or inverting buffers, crazy. I'm only thinking about the active high mode now.

But then the carry-in is weird, it has to be held high the whole time. This is extremely annoying because how will I do an add-with-carry if I have to hold the carry high just to make an add?

And all that complexity comes just for having a huge amount of weird functions which I have no idea how to use?

But then, I remember that the PDP-8 instruction set has no OR, so people had to use some weird combination of AND and TAD. Perhaps among the seemingly useless functions are some useful ones?

Anything useful to speed up multiplication or division loops? 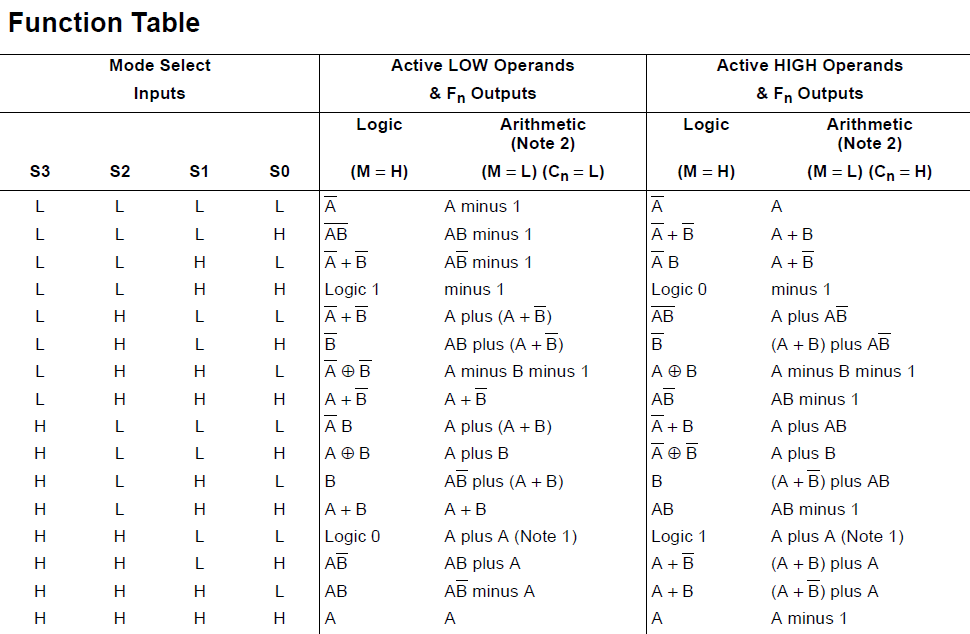 Note, I am not asking "why" is it the way it is. I am sure there is a certain beauty and symmetry, to all of this and a minimization of transistors. My question was how more than half of the functions that seem so weird were actually useful to anyone? 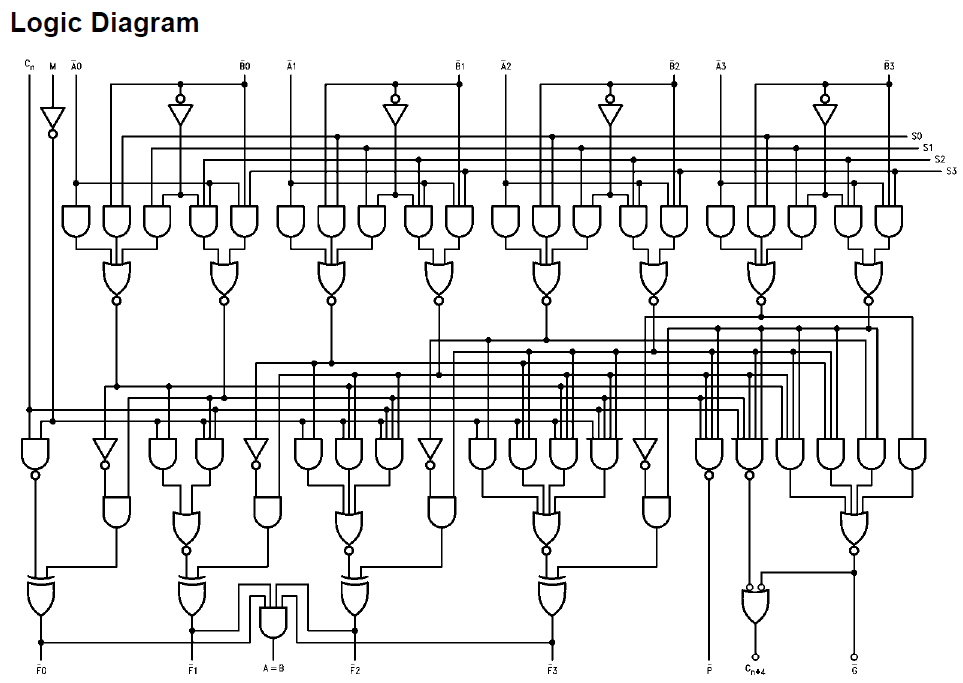 Note, I am not asking "why" is it the way it is. I am sure there is a certain beauty and symmetry, to all of this

Might still be useful to peek at Ken Shirriff's write up about the '181 - great as always - going into details why these functions are the way they are.

Likewise the datasheet states straight out that these are simply the 16 possible logic functions that can be done:

Since the arithmetic functions are the logic ones but including carry, they as well have to be 16, even though some may be less useful.

... and a minimization of transistors.

But that's exactly the reason why one can access 'weird' functions no one needs (*1).

When looking at the '181 it's mandatory to keep in mind that in 1970 it was at the top end of what later would be called medium scale integration: Designs with 10 to 100 gates. The '181 had about 75 gates with roughly 300 transistors. For back then as cutting edge as some multi-billion transistor devices of today.

To operate the network as it is, it needs five inputs as control signals. To present only the 15 function you see as useful (*2), a 16-to-32 demultiplexer would be necessary. Unless one comes up with some clever (and very small) circuit this means a 4-to-16 decoder and a 16-by-5 ROM this will be at least 100+ transistors. That's a good 35% penalty in size and more in cost, to a chip already at the forefront of capabilities. And all for what?

The point of the '181 is not to bring a well rounded high level ALU, like some FPGA would, but to reduce a full board of TTL into a single chip plus a bit glue logic. Of course this comes at the

My question was how more than half of the functions that seem so weird were actually useful to anyone?

Who says they had to useful to begin with?

They are simply the internal control lines for the circuitry given. They are the low level interface to a circuitry that got integrated into a single chip, not a shiney polished 2022's design with more transistors than ants in my garden (*3).

Today it's a no-brainer to throw gates worth several '181 at a chip just to beautify input. Back then the '181 was already top end. Adding another 100+ transistors, just for that, would have been rather frivolous.

But also questionable from a usability point - who says a circuit does need all 15? If not, the same problem as before arises: Useless functionality to be considered - but this time with an even more expensive chip.

Why have these functions be included in the data sheet.

It's a defined circuit, the workings won't change (*4), so better document what's visible to anyone looking at the published design (*5).

It also has been a different time, a time when designers wanted to know the internal circuit of a 7400's gate, so they can use it in other ways then just at logic level :))

*1 - Not counting cases were - usually by chance - they came handy.

*2 - Beauty is in the eye of the beholder - or in this case usefulness is quite dependent on what to be done. For example not A and B would be quite useful as masking operation. It will reset all bits in B set in A, so one can use the same mask (in A) in a SET-BIT(s) instruction (A OR B) as for a RESET-BIT(s) (not A and B). A CPU where one doesn't need to write 255-CONST :))

Solomon Slow reminded of an important use in modern (GUI) graphics: Bit-Blitting. For a basic bitmap display not A and B is the very function to save screen content under a moving mouse pointer, or dragged icon, as well as to mask out the background when painting an icon.

*4 - Unlike unused code points in an ISA wich may be reassigned with later versions.

*5 - After all, reading such a basic and quite symmetric schematic is like browsing a 4th grade school book.

The others might not be so obviously useful (notwithstanding that they might be useful in some obscure - or even some not obscure - cases), but need to be documented in order to provide a full truth table for the chip. So, basically, the "not-so-obvious functions" were not designed into the chip, but are a by-product of the optimised implementation of the above obvious ones)

Why do the internals of the chip look so weird compared to a cascade of full adders that we've all (hopefully) learned about in school?

The answer is performance: A cascade of adders does stabilize its output only after all digits have been fully processed (and the digits are calculated in a serialized manner, and for a considerable number of digits this can seriously add up). If you could "guess" whether a carry is going to be produced per digit, the next digit could already start to work and stabilize before the first digit is fully processed (that's called "carry lookahead", and works with a companion chip, the 74182) - So the overall execution time is much lower than a cascade of full adders.

10
Which CPUs had instructions leaving data registers in an unspecified state?
10
What was the main purpose of bitshift instructions in CPU?
21
Why did the Z80 with 4-bit ALU out-perform the fully 8-bit Intel 8080?
3
74181 in odd carry logic in active high mode
1
74'181 missing zero flag but strange -1 (or all 1) flag, only makes sense in active-low mode?