What was the first computer to support Arabic writing?

Looking at early microcomputers, all of them have support for something resembling ASCII, occasionally a few letters with accents and things were included also. And occasionally another alphabet such as Russian or Armenian was squeezed in.

But the Arabic alphabet is a bit more complicated. It's written (mostly) right-to-left, and as far as I can tell it needs many diacritics to be legible. What was the first computer to support this alphabet?

Computers with user-definable graphics, like the ZX Spectrum or the TI-99/4a, qualify if you can show a software title which uses them to render a sequence of bytes as Arabic text. I am not only considering the Arabic language here but any language which can be written with Arabic letters (eg. Urdu, Turkmen etc.)

The Apple II had rudimentary Arabic versions as early as 1979, similar to the later Apple II j-plus. I recall Woz saying at a talk he gave that he was personally involved in adding Arabic support. 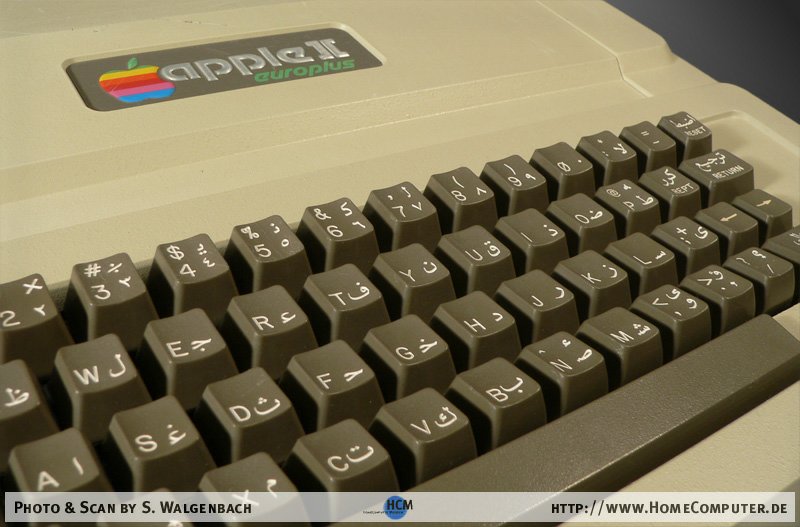 The "VINTROPEDIA - Vintage Computer and Retro Console Price Guide 2009" gives a date of 1979 for the europlus version - which sounds about right.

It was most probably not the first computer to support Arabic, but the Sinclair ZX Spectrum apparently was sold in an extremely rare Arabic version. That ROM is available for download and use in a Spectrum emulator. 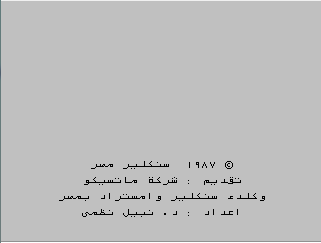 The Arabic ROM did not simply use the Spectrum's UDG capability, but provided native Arabic support including right-to-left writing and support for diacritics (I don't know Arabic, so can't say much about the actual level of support here). Even ZX Basic programs are written right-to-left and list in Arabic glyphs.

The computer apparently had a switch to select between the original and the Arabic ROM.

The following screenshot shows the "Horizons" introductory program running on an Arabic ROM. The upper part of the screen is a bitmap and thus not using the Arabic font, but the "Stop the tape and then press any key" message on the lower part of the screen does. (I used the "standard English" Horizons, so that message might look weird...). Also, the character coordinates seem to have been turned around, because in the Horizons program, the screen is flashing the concepts all in the wrong places.

And in case you wonder that the screen writing in Arabic apparently is still left-to-right: I presume the Horizons program doesn't use the standard ROM character output routine... PRINT in ZX-Basic really prints right-to-left. I checked. 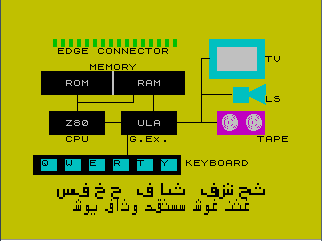 The Xerox Star 8010 (1981) featured Arabic typography in its promotional photographs: 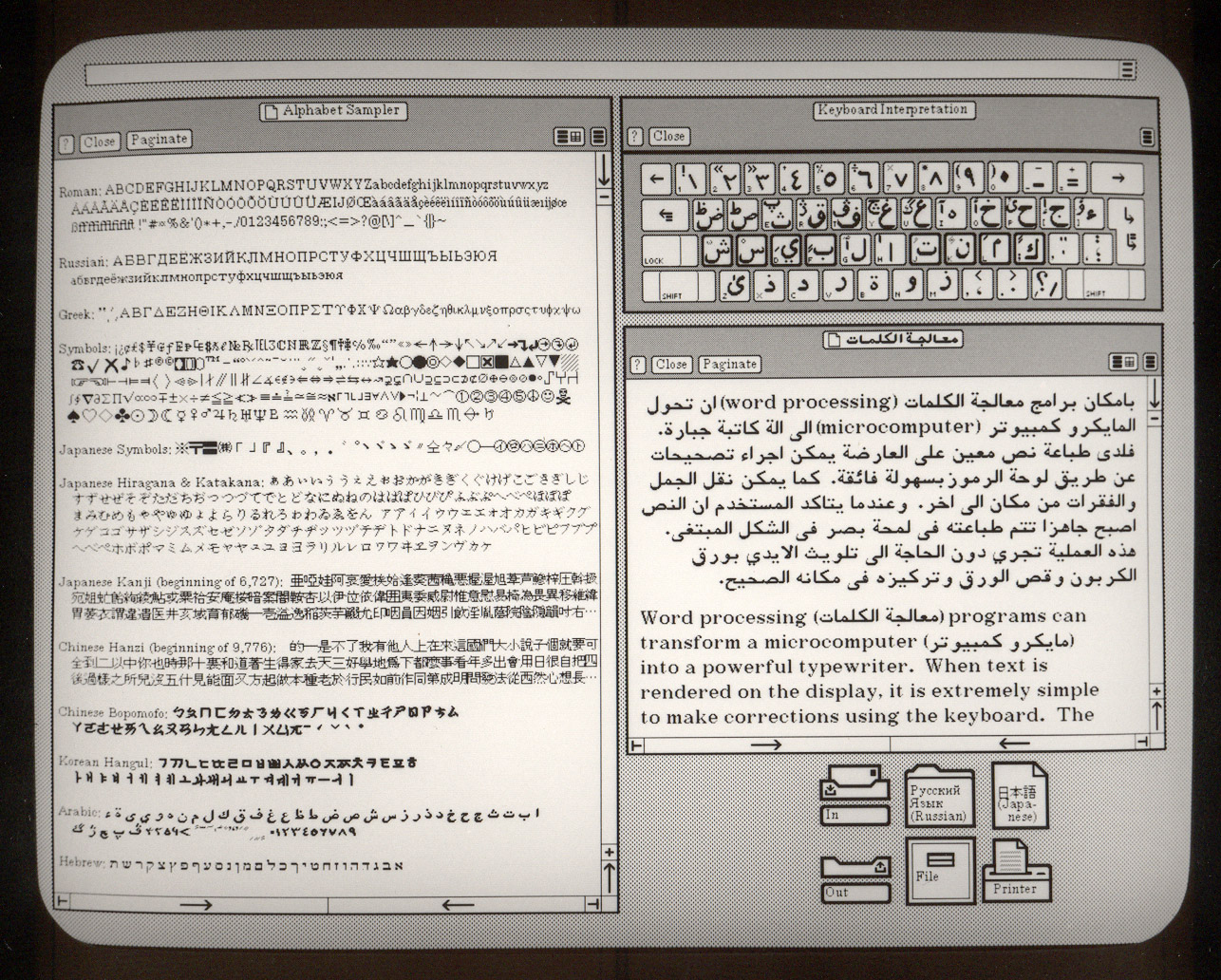 As far as I know the earliest ones were:

I wasn't aware of the ZX Spectrum mentioned above.

Well, while this is not an answer according to the requested Mirocomputer criteria, Arabic script was already present in the 7-bit age, standardized as ASMO-449 / IR-089 in 1982, but already used that way several years before. It's based on 7-bit ASCII.

There were mainframe terminals using its precursor form as early as 1976.

Another very early 7-bit variant used in terminals was based on a German transliteration from 1935, which replaced all Arabic letters, except 5, by single Roman letters, so only 5 symbols from ASCII had to be sacrificed to include it into 7 bit code space. Since this was (and still is) the correct (German) transliteration for Arabic, it had a great side effect, that displaying the same data using basic ASCII displayed (almost) readable Arabic text (using Roman letters) - well, except these 5 symbols that is - which could be fixed by search & replace anyway.

With DOS 4.0, IBM also introduced a special Arabic DOS version using Codepage 864, which brings this definitely back to microcomputer mainstream.

Later, Windows 1256 and corresponding ISO 8859-6 solved the 7-bit issue by moving Arabic into the 8-bit code space and enabling many more computers to be used with this script.

Well, and then came Unicode :))

Baudot code can be used to represent abjad, and I wouldn't be surprised if a mainframe be interfaced with an Arabic ASR-33 (though an ASCII TTY, it has a 5-bit sibling ASR-32). http://www.quadibloc.com/crypto/tele03.htm

HP 2645R - Arabic version of the 2645A [widescreen terminal], writes right to left (1977), according to curious marc. https://www.curiousmarc.com/computing/hp-264x-terminals